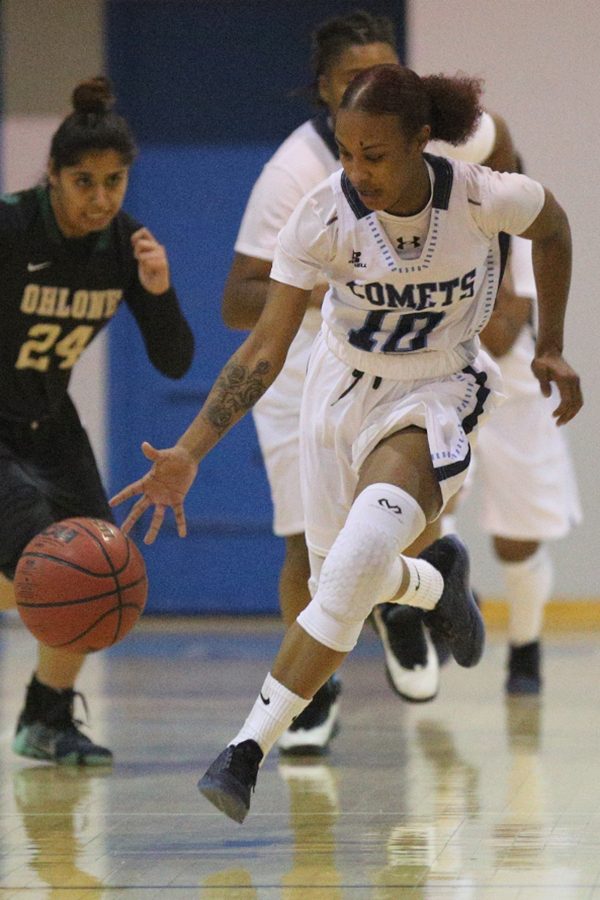 Comet point guard Azanae Lewis dribbles up the court during the 23rd Annual Comet Classic women's basketball tournament in the Gymnasium on Friday.

In life, people acquire leadership qualities through two ways — some people are said to be born leaders and some earn the right by learning from a collection of experiences that reshape the idea of what responsibility is and how it should be displayed.

For Comet freshman Azanae Lewis, the idea of becoming a leader was not paramount in the point guard’s mind. It was gained through a series of events that forced her to embrace adverse situations and take advantage of opportunities to foster growth.

“She’s the type of person who pushes to get better even though she (Lewis) is still a freshman,” Contra Costa College sophomore guard Julian Robinson said. “(Lewis) is always encouraging. Even if we are behind in games she always fights — she is a good teammate and always positive.”

Born March 24, 1998, Lewis graduated from Fairfield High School in 2015 after beginning at Armijo High School and attending Vanden High School for her sophomore and junior years.

As a senior at Fairfield High, Lewis’ 14.6 points per game and 2.3 steals per game ranked above the national averages for high school girls.

Basketball was not always a certainty in the kinesiology major’s life. Although she started playing as an 8-year-old, Lewis fell out of love with the game before entering AAU play in the eighth grade.

“When she said that she didn’t want to play basketball any more I tried to convince her to stick with it,” Lewis’ mother and former Vanden High School point guard Anjie Jackson said.

“She (Lewis) has a good heart but she can be stubborn — if she doesn’t like something, she’ll let you know about it.”

When Lewis decided to play, her AAU team of all-star quality players was full so Lewis was relegated to a lesser squad. The move forced Lewis to learn to be a leader and help her team deal with the adversity of team athletics.

It was experiences like that, as well as helping transform Fairfield High’s girls basketball into a winning program in her senior year, that cemented the guard’s new-found leadership qualities.

The senior helped guide Fairfield High’s 2015-16 team to its first playoff appearance in nearly a decade.

Knowing the athletic gene resided within her daughter from an early age, Jackson initially signed a young Lewis up for cheerleading at age 6.

It was not until family friends urged the mother to let her daughter play basketball that Lewis’ athletic potential would be revealed. Lewis thrived on the court and as her skill set blossomed, the point guard began to feel comfortable with basketball, despite longing for a career that offers help to people dealing with injuries — sports medicine.

“I chose to major in kinesiology because I enjoy helping people,” Lewis said.

“Even on the court, as a point guard I have to make sure people are in the right position and then get them the ball in the best position to be successful.”

The freshman’s experience throughout various levels of competition has more than prepared Lewis for this stage of her playing career as point guard for the Comets.

“I’ve known her (Lewis) since she was in the fifth or sixth grade. She took a liking to basketball and stuck with it,” CCC coach Vince Shaw said. “I think she’ll fit in well here. Lewis has an edge; she plays with an aggressive attacking style that will continue to develop.”

Lewis, a Solano County native, planned to play at Napa Valley College for Shaw. But when the coach left Napa for Contra Costa College, the guard came to play for the coach that she’d known for most her life.

Lewis has come a long way from nearly walking away from the game just a few short years ago.

“I had been playing for so long that I was just not feeling the game anymore. But everyone kept telling me that I should play,” Lewis said.

Now, the freshman has hopes of using her basketball acumen to transfer to a four-year college.

In five games this year, Lewis is averaging nine points, two assists and two steals per game for the Comets with four games left before Conference play begins.