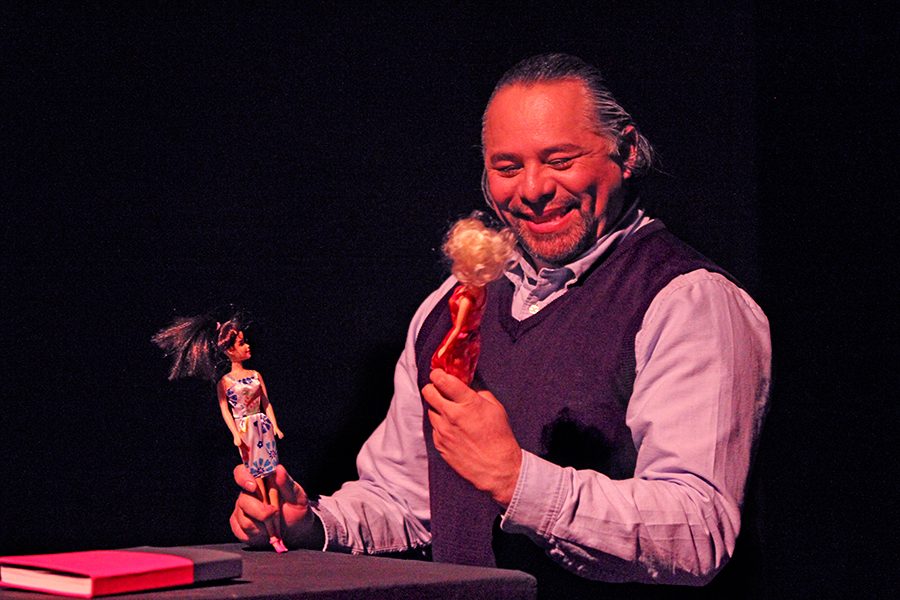 Drama department Chairperson Carlos-Manuel Chavarría plays with two dolls during a scene of the one person play, “Joto!: Confessions of a Mexican Outcast,” in Knox Center on Friday.

Often times the best comedy in acting comes when a performer experiences and overcomes tragedy in their lives and is able translate that tragic time into a humorous and relatable performance.

“Joto!: Confessions of a Mexican Outcast” is a hilarious one night, one-man show written and performed by drama department Chairperson Carlos-Manuel Chavarria and directed by Jimmy A. Noriega on Dec. 2 in the John and Jean Knox Center.

“Joto” is an anti-gay pejorative that translates to “fag.”

In the show Chavarria describes and acts out his experiences of what it was like for him to grow up as a Mexican immigrant and a gay man.

Simply put, “Joto!” is masterfully written and performed by Chavarria. The play explores Chavarria discovering and understanding his sexuality as well as living in America as an immigrant struggling with the pressures to assimilate and hold on to his culture.

The play is hilarious even with its exploration of such complex and emotional topics. In the 70-minute show there wasn’t a point where it was boring. For a one-man show to work, the one actor must be charismatic and build enough empathy where the audience remains engaged for the entire show and Chavarria always switched up his performance to do so.

One second he would deliver a soft monologue and the next he’d be romping around the stage cracking jokes and utilizing verbal and physical humor.

In the midst of the humor Chavarria was able to suck in the audience with emotional moments then switch the mood with a well-timed joke.

The humor and dramatic sections never felt at odds with each other. The humor had a sense of realism and tragedy to it that made the play relate to a general audience.

A fair amount of jokes flew over some of the audience member’s heads who weren’t familiar with Mexican culture. However, the universal messages of self-discovery, overcoming struggles and love for one’s culture resonated and the references to Mexican culture connected with the majority of the audience and served to build an empathetic connection with Chavarria.

Amid all the jokes, another key component of the show was how emotional it was. This was a brave performance by Chavarria. He wasn’t afraid to talk about the harsh realities of growing up as a gay man or even currently being married to an undocumented immigrant and the challenges they face today.

At the end of the show, it felt as if everyone in the audience knew Chavarria on a deeply personal level.

The willingness of Chavarria to be open with his experiences paid off because the audience was invested in his performance and his life story. It was a masterful example the product of keeping an audience engaged. The show concluded with a well-deserved standing ovation for a great performance by a great actor.

“Joto!” is the best production put on by the Contra Costa College drama department this semester. It is a shame “Joto!” was only a one-night performance. Chavarria should definitely consider doing a spring performance because this is a show that should have a multiple night run and be seen by the entire student body.