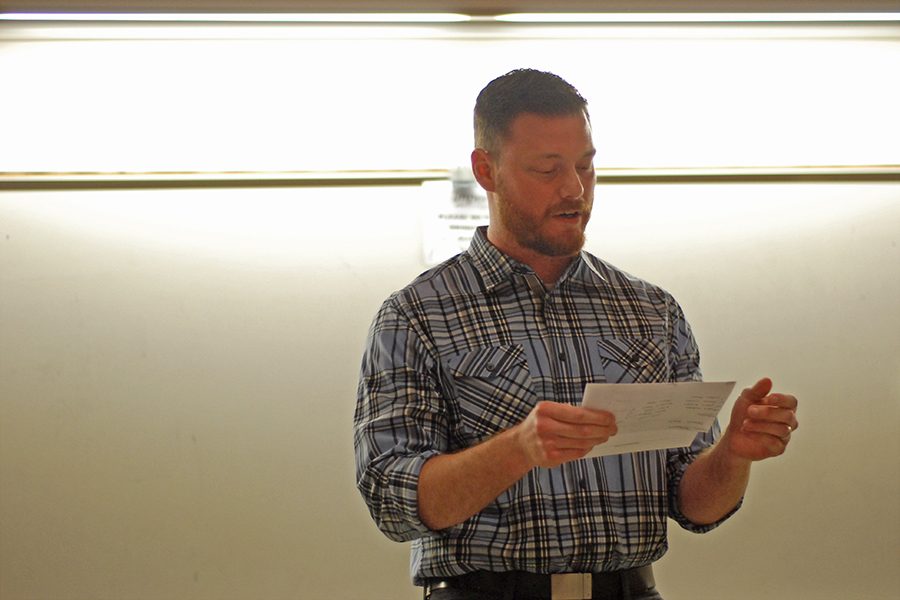 Xavier Johnson / The Advoc
Exercising one’s voice can bring more meaning to the delivery of a message. With the speech department hosting the bi-annual Intramural Speech Tournament, students exercised their voices to inform, persuade and interpret their messages on Thursday.

Speech department Chairperson Sherry Diestler said, “Students advocated for their beliefs in any way they interpreted. The tournament was a good way for students to gain confidence, realize the (speaking) skills they had and see that (delivering speeches is) fun.”

Speech and debate member Malcolm Jackson said students competed in two rounds in their categories. Three to six students delivered their speeches to a small audience and a judge within classrooms inside the General Education and Applied Arts buildings.

Middle College High School student Keylem Ortiz participated in the persuasive speech category. Her topic was on changing the requirements on the Development, Relief and Education for Alien Minors (DREAM) Act for undocumented individuals.

“My speech was on giving the Dream Act to every undocumented individual without any conditions, unless they had criminal records. I chose this topic because my cousin came undocumented to the U.S. She struggled to apply to colleges. Even though she got a lot of scholarships, she still had a hard time paying off tuition,” she said. “A lot of students go through the same problem. They try to get a better future than their ancestors but they can’t because they’re undocumented. If people get together and show that this issue matters, we can make a difference in their lives. They are parts of our community and some people don’t realize they’re undocumented.”

Ortiz said she was initially nervous because, as a 14-year-old, she was the youngest person in the room and surrounded by men.

“Eventually, I felt like I had power as I was delivering my speech because I felt like I made a difference as I was making them aware of this problem,” she said.

Professors and members of the speech and debate team judged each round by scoring participants based on tone, delivery and integrity of their speeches.

Judges wrote critiques of each speech on ballots, speech professor Randy Carver said. The judge ranked each speech from first to sixth and rated each student’s speech out of 100 points.