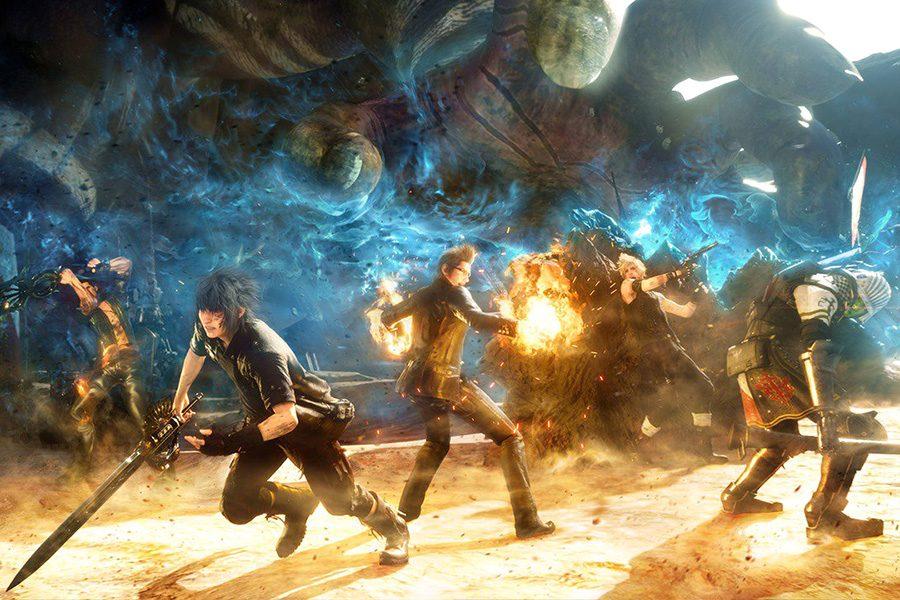 Longtime fans of the ‘Final Fantasy’ series who have fears that this game will not be like the fabled ‘Final Fantasy’ games can rest. ‘FFXV’ opens up with a splash screen that reads “A ‘Final Fantasy’ for fans and first-timers.” The game feels both familiar and new at the same time.

The mixture of Western and Japanese role-playing game mechanics usually signify disaster for those making the game as it quickly becomes a pick and pull list of clashing mechanics from both genres. Developers get stuck trying to fit an equal number of mechanics to appeal to both audiences. ‘FFXV’ manages to craft that duality into a beautiful uniformity that is held together by its four main protagonists.

In most traditional role-playing games, the main characters are adventurers who met along the way in the main journey. Prince Noctis Caelum and his group don’t share that traditional cliché. Noctis brings his four best friends, Prompto, Gladiolus and Ignis along on his journey to reclaim his throne and save his kingdom from the evil empire of Niflheim.

It’s the relationship between these four friends that ultimately creates the intrigue that drives players to put dozens of hours into the game. Players will leave this game knowing these characters on a deep personal level.

The game opens up with a familiar scene that helps ground the game in reality despite its grandiose fantasy themes. The four protagonists argue over who gets to steer and who gets to push their fancy convertible that ran out of gas. Players will use the prince’s car, the Regalia, to navigate the expansive open world. As the main characters find rest stops and towns, they can inquire about quests at local diners and restaurants. Players can take on hunting quests that send them searching for herds or giant monsters terrorizing the area. These quests usually yield a large sum of money and monster meat for cooking.

‘FFXV’ features a day-night cycle. When night comes players have the option to make camp or rent a hotel. When players rest at a campsite the experience points they earned during the day will be tallied up and they will be able to level up. Players will also get the chance to select what the characters will have for dinner. Ignis will pull out his cookbook, which can be expanded by finding new recipes, and a variety of plates will be available depending on what ingredients are available.

These plates will give the characters a variety of stat boosts. Square Enix took another opportunity to flesh out the characters by giving them favorite food types. Noctis is known to hate anything that’s healthy and prefers to feast on hamburgers and fries over a vegetable stew. These favorite foods will give each specific character a greater stat boost than the others. It’s little details like these that make ‘FFXV’ shine and keep its characters believable.

The same way people don’t drive cars into hiking trails, the Regalia can only be driven on the road. When players reach their desired destinations, they must park and continue on foot. While exploring the open world players can collect cooking supplies and other valuables they can either sell or use.

After reaching a certain point in the story players will be able to summon Chocobos to help them get around the environment faster. These cute yellow Ostrich like birds can be used to make quick getaways or come to your aid in battle.

The battle system is fun and easy to understand but hard to master. FFXV drops the classic turn-based combat and opts for real-time combat with pauses only happening when selecting an item from the battle menu. One button attacks and one button defends.

As long as Noctis has Magic Points in his MP gauge nothing can touch him. The difficulty is trying to master blocking and attacking without wasting all of the available MP. Noctis can teleport around the battlefield and blink strike enemies from afar using any of his three equipped weapons.

Noctis starts out using a standard sword, a giant great sword, and a javelin to eliminate his enemies. Using these different weapons against different enemy types will allow the chaining of massive combos and figure out their weakness.

Attack chains are modified by tilting the left analog stick in different directions while holding the attack button. As bigger combos are landed, party member yell out and complement the impressive attack.  Should damage be taken, you will also see your party run over to lend a hand. The team’s artificial intelligence is fantastic and helps them form a well-rounded group of monster hunters.

The banter between the characters is what keeps this game feeling alive. The lively characters keep their personalities whether they are driving down the road or doing mundane fetch quests for characters. They will comment on just about everything that goes on without constantly repeating the same lines. As you make your way down the road you will see the characters pass each other sodas, begin to read books during longer drivers, nod off to sleep, and make general conversation. It’s easy to stereotype the characters into generic roles — Gladiolus is the tough guy, Prompto the comic-relief and Ignis the serious and collected — when you first meet them, but as you spend more time with them you learn how deep these characters are.

‘FFXV’ looks absolutely gorgeous on the current generation of consoles. The game is simply breathtaking. Traversing the different lands and getting to witness the different weather effects is fantastic. I found myself pulling over to watch the sunset or a heard of animals walk through the tall grass. As the game zooms in on the characters, their individual strands of hair blowing in the wind are visible. Frost will build up on the characters’ jackets and boots as they stand in the snow. Square Enix paid a tremendous amount of attention to detail. That has helped this game feel like it’s taking place in a living world.

Despite the amazing music, Square Enix failed to synchronize the voice acting properly. During certain scenes there are a few seconds where the mouth doesn’t match the words. This is a small complaint in this masterpiece of a game.

‘FFXV’ delivers on all parts, it doesn’t fail to entertain or provide a great story. ‘FFXV’ is an amazing game with a few minor flaws that can easily be ignored.