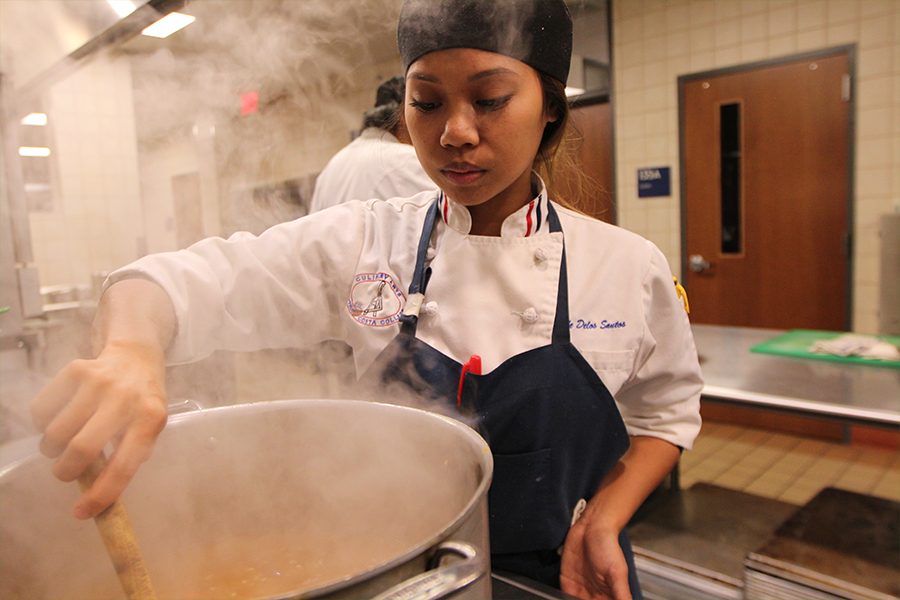 Culinary arts student Kyle Delos Santos brought back a new and rejuvenated knowledge of healthy eating from her trip to Italy this past summer.

Delos Santos was born in San Francisco in 1989 and then moved to the East Bay when she was 10 years old. Her love for food was inspired by her parents, who strongly value cooking healthy prepared meals at home rather than dining out.

Born to Filipino-American parents, she said that their favorite foods still consist mainly of Filipino ingredients. However, Delos Santos has introduced her family to many new additives, and cuisines.

Here in the Bay Area we have the luxury of walking down the street and getting food from many different cultures, which is something you don’t find everywhere.

“My cooking is all about the people, and goes back to sharing something I love with someone. Being in the kitchen and staying focused, shows that nothing else matters in that moment,” she said.

She said she looked into other culinary schools like Cordon Bleu in San Francisco, because it’s local and attracts a good demographic of people but she enjoys the level of responsibility that comes with the word chef here at Contra Costa College.

Delos Santos took on restaurant jobs concurrently with classes here at CCC in her first semester. It gave her an opportunity to see how different kitchens are run and exposed her to different techniques from different cooks. She worked closely with, and learned many tools of the trade, from head chef Elizabeth Schwartz her first semester, summer 2015.

“This program here has challenged me, and when I got back from Italy my mindset changed to letting the ingredients speak for themselves,” Delos Santos said.

She said when they were in Italy she learned to appreciate the health differences in pizza. In that region of the world, they use less cheese and more olive oil, so they’re not overdressed, and all their pizzas are called focaccia. Their diet is mostly Mediterranean, so it’s higher in seafood. “The way we use cheese here, is similar to how they use oil in Italy,” Delos Santos said.

They have more authentic oil, and they finish their dishes like antipastos. She said that they didn’t eat at many restaurants, but prepared most dishes at the resort.

Delos Santos said they started off in Otranto where they visited lush fields for olive growing, where the people were welcoming. Then they visited the coastal town of Vico Equense, which is higher up on the mountains, and ate plenty of seafood.

Then they visited Pompeii and saw ancient sculptures and preserved buildings in the over 100 degree weather, where they walked an average of 10 miles every day.

Finally, they ended in Rome, which is more metropolitan because it has a subway system, and the streets were filled with bustling people and retail shops. She said the modern city was built over ancient landmarks and there were a lot of cathedrals.

Kate Bautista, a fellow culinary student and close friend of Delos Santos, said, “She has a very strong personality and has potential to become a great chef. She’s focused, knows what she’s doing and we each love food. We work well as a team, and it takes off the pressure when you have a good friend whom you work well with in the kitchen.”

Delos Santos said high quality noodle soup is her favorite dish, because she grew up eating that as a child.

Delos Santos has proved to be a dedicated leader. Schwartz said, “We have busy days in the kitchen, and if I need help on something she’s my go-to person to take on a responsibility, and I know it will be completed.”

A dish that she is most proud of making was a squid ink pasta, — she brought the ink back from Italy — because she had never worked with squid ink before. She said that some of her best discoveries have been made when she wasn’t even trying.

Delos Santos’ future plans include traveling to Asia to visit family in Cambodia and the Philippines. She has plans to utilize all resources, including interviewing for internships. Eventually, her objective would be to regroup after visiting family and work at a resort in Cambodia.