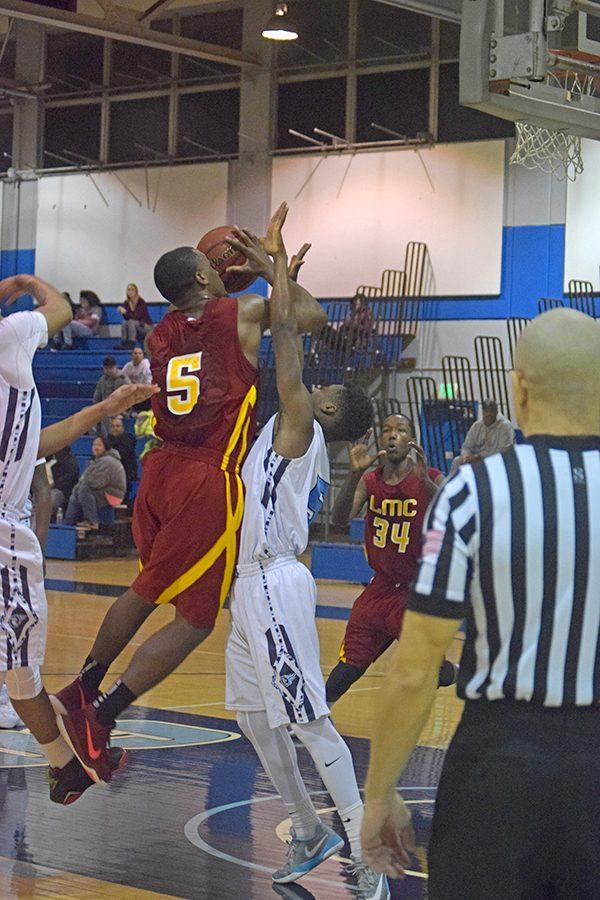 Comet guard Damar Dunn attempts to draw a charge as Los Medanos College guard Mark Thomas drives for a layup during CCC's 74-71 loss in the Gymnasium on Jan. 27.

The men’s basketball team lost its fourth game in a row in a heated battle at home that came down to the final minute of the contest, after leading early then falling late, 74-71 to Los Medanos College Friday in the Gymnasium.

With only five conference games remaining, the struggling Comets (7-15 overall, 5-6 in the Bay Valley Conference) will try to bounce back to their winning ways in a matchup against last place Solano Community College tonight at 7:30 in Fairfield.

After letting a 12-point lead slip away in just four minutes, there weren’t many words from Comets coach Miguel Johnson after the game.

Comet sophomore guard Kolman Kelly said, “We just didn’t execute well. We have to execute better under pressure and put our foot on them early.”

The matchup featured two guard-heavy squads which made for a very fast-paced game. Fans in attendance could not look away for a second or risk missing an inspired play.

LMC came into Friday’s game against the Comets having won eight of its last nine games. Its only loss came by way of a 20- point blowout to undefeated Yuba College on Jan. 25.

The high energy Comets applied defensive pressure on LMC from the onset of the game.

On offense, CCC successfully  kept the Mustangs out of rhythm defensively by driving to the basket for high-percentage shots and also by crashing the boards for rebounds on those shots.

The efforts made for easy put backs in case of a miss.

After two early first quarter turnovers, the Mustangs jumped out to an early 5-0 lead.

The Comets responded quickly with two 3-pointers of their own to take their first lead of the game.

The Comets shot 55 percent from behind the 3-point line finishing 11 for 20 in the contest.

CCC held a lead for the majority of the game even though the team had offensive and defensive lapses at multiple points throughout the contest.

Sophomore guard Dwight Wilson and freshman Dru Solis showcased their talent from the 3-point line as CCC looked to take advantage from the perimeter with their 3-point shots.

Wilson lead the team with 19 points and four rebounds against LMC. He also led the team in 3-pointers shooting 4-6 from behind the arc.

However, LMC didn’t get discouraged and kept repeatedly pounding the ball inside the key to its post players.

Coming off back-to-back team fouls, the Comets recovered one of many LMC turnovers and converted it with a Kelley layup and Mustang foul.

CCC sophomore Demond Washington was able to contribute 13 points off the bench in 22 minutes of play.

Slowly, the Comets transformed a small advantage into a double-digit lead facilitated by four Comet guards who scored in double figures.

Even after committing five team fouls in the first 10 minutes of the first half, four of them offensive, the Comets still managed to hang on to a comfortable lead heading into halftime.

Wright ended the first half with a big 3-pointer for the Comets to extend their lead over the Mustangs 41-32 at the break.

Solis began the second half with another 3-pointer.

After the shot, CCC made it a priority to pressure whoever had the ball for LMC which helped the team hold on to a double-digit lead through the first 10 minutes of the second half.

Coming down to the final five minutes of play, LMC started to close in on the Comets after chipping away with a variety of scores and made free throws.

As the moments intensified, Comet players began to show signs of wilting under the pressure of watching a robust advantage whittled down to a mere five-point advantage.

Inconsistent play by CCC allowed the Mustangs to tie the score at 71 with 1:20 to play in the game.

LMC hit a clutch 3-pointer with five seconds left to take the lead at 74-71.

The Comets had no choice but to launch a Hail Mary which drew iron but failed to go in as the final seconds expired.

“We’ve got to be more physical on defense and rebound the ball better,” sophomore forward Curtis Harris said.