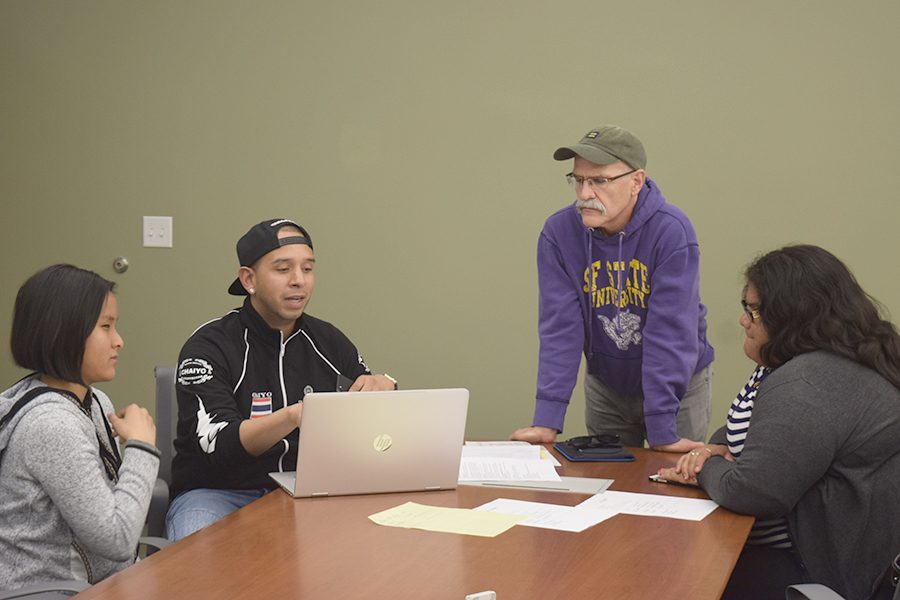 The Alphabet+ Club held its first meeting of the 2017 spring semester on Monday in SA-107, and although it’s off to a slow start, current members discussed the Governing Board and ideas for upcoming events that could help boost club membership, awareness and organization.

Founder Enrique Duarte said he didn’t do any recruitment over the past month, so the lack of students at the meeting was expected.

“The main idea is to create a club where people feel comfortable and safe,” he said, “We want to first create that environment before we worry about members.”

Duarte opened with a brief memorandum of the club’s main purpose, which is to raise awareness of social injustices based on sexual orientation through education, programming and dialogue.

Members introduced themselves and were led into an open conversation of LGBT+ topics.

Math major, Michael Zephyr said he recently heard about an anti-LGBT+ law that President Donald Trump was getting ready to sign.

“Anyone can tell you, you are not wanted because of his or her religious belief,” he said.

But as the discussion began to take a more stirring turn, club adviser Michael Peterson calmed things down.

Peterson said, “It’s difficult to say what is law right now and what isn’t.”

After closing the discussion, on a lighter note, Duarte went over the constitution, that details the president and vice presidents role in the Alphabet+ club, which are still vacant with election plans in the coming weeks.

“We still have basic guidelines to work out and fill positions that are necessary,” Duarte said.

The Alphabet+ club is also without other directional leadership that is essential to the running of a club, which is why the club is unorganized and having little success.

Duarte continued on with ways to spread the word about the club, with some members suggesting a table in front of the Fire Side Hall to hand out flier and posters.

However, some members felt the need for a confidentiality rule and did not want to participate.

Zephyr said that since the club was so new, it would be better to at first send an email blast to get more people involved and interested in a comfortable way.

Peterson suggested doing something for Valentines Day along the lines of rapid HIV testing, while other members suggested themed discussions and fundraisers.

Duarte said there are many goals that the Alphabet+ Club wants to achieve this semester.

“I want this club to get up and running and bring people together,” he said. “We want to make the LGBT+ community visible on campus and (bring) unity, to build confidence.”

Club members also discussed creating a rainbow flag with the CCC logo that would represent the Alphabet+ club on campus.

Psychology major Virginia Beltran said the Alphabet+ Club is important especially now with a lot of important issues coming up with the new president.

“It’s to let people know they aren’t alone and it’s OK to come out and there are people here to help them,” Beltran said,

“Anyone is welcome to come in at any time.”