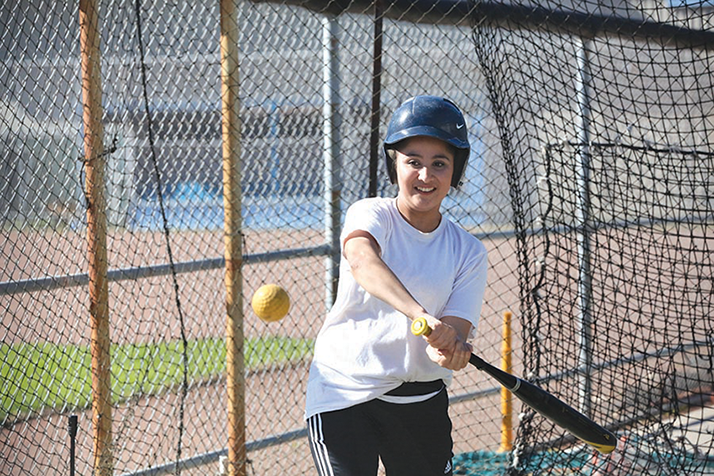 Comet infielder Zuleyma Higareda takes some swings during batting practice at the Softball Field on Feb. 8, 2016.

On the heels of a lackluster 2016 season in which the softball team finished in the cellar of the Bay Valley Conference with a 0-22 record, expectations of a turnaround season remain tempered.

Last season, CCC was one of only three teams in Northern California to finish the season without a win in conference play. Modesto Junior College 0-22 and De Anza College 0-11 also join the Comets in looking to erase the memory of last season.

The problems of last season seem to pale in comparison to what is already a rocky start for BVC softball.

With just two week left before teams begin non-conference action, the BVC has only four teams slated to participate in its conference — the fewest in the state.

“We really want it to work but in the same breath, what are we supposed to do?” Comet Athletic Director John Wade asked. “Everybody in the BVC is trying, but it’s (getting participation numbers up) like pulling teeth.”

Leaving Solano College, Folsom Lake College and Napa Valley College as the teams on the outside looking in this year.

The four-team conference season for BVC softball is scheduled to begin March 7 when CCC travels to Marysville to play Yuba College at 1 p.m.

The lull in participation in women’s athletics, which at times felt directed at this campus, has continued to expand throughout the Bay Area and spans athletic teams.

Last season CCC canceled its women’s soccer program, the women’s basketball team finished with just six players and the 2017 basketball team is hovering at or near those same numbers.

Solano even finished with over 11 freshmen on its roster and four freshman pitchers.

Neither program, considered softball standards in the area, could field a complete team.

“It’s a crapshoot. We’re working just to have a league, I’ve never seen anything like this before” coach Karolyn Gubbine said. “It’s a struggle starting from the ground up again but who’s to say that the other teams aren’t hurting as badly as we are.”

For Comet softball, the lack of depth over the past two seasons is not a reflection of apathetic athletes on campus. CCC was at the epicenter of the outbreak and now the signs of a larger problem are spreading throughout conference.

Despite the league-wide problem, Comet players are enthused about the prospects of playing Comet softball.

“I hope that we show the same growth in softball that we did in volleyball this season,” sophomore catcher Amy Palomares said.

“We had a good vibe in volleyball and for the most part in softball last year. I hope we get to know each other early in the season.”

This season, CCC will be without its anchor All-BVC pitcher Anna Palter.

Despite not earning a win for the Comets in 2016, Palter ranked fifth in the BVC in strikeouts (28) and second in conference in strikeouts per game (5.60).

Palter, along with catcher Sidney Davis, provided leadership for last season’s young Comet team that hopefully was absorbed by players who are returning to play this season.

As the four remaining teams scrape together regulation lineups in hopes of salvaging the student’s season, players still undergo the rigors of practice in preparation of playing a full season.

“I set personal goals to better myself throughout the season as opposed to just going out there to play,” Comet sophomore fielder Zuleyma Higareda said.

“This season I expect to get some wins and hopefully to have fun.”