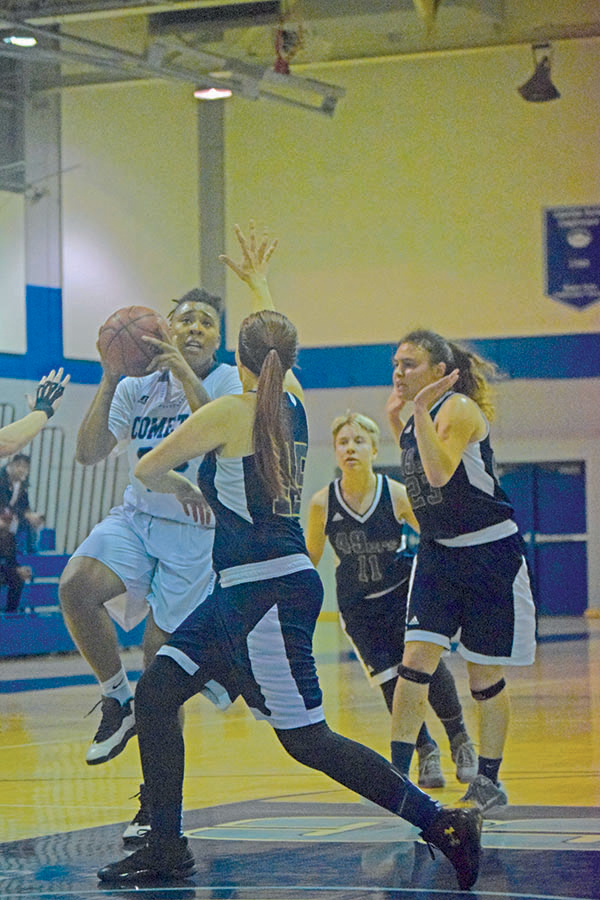 The Contra Costa College women’s basketball team was handed its second defeat in a row following a tumultuous game Friday against Yuba College in the Gymnasium.

Yuba guard Kylee Daniels scored 45 points and drained 10 3-point shots, dominating the Comets from the outside.

“It’s poor defensive effort and lack of attention to detail, but you have to give Yuba credit. Some of those shots were just big shots,” Comet coach Vince Shaw said.

At the beginning of the game CCC took an early lead that was maintained for the majority of the first half of the contest.

Shaw said when the other team is shooting that well, like Yuba (14-13 overall, 6-5 BVC) did, it’s a combination of factors that led to it.

After a heated sideline conversation with Shaw, Comet guard Julian Robinson was taken out of the game in the latter portion of the third quarter.

Yuba struggled to stop Robinson from scoring early in the game, but once she was taken out Yuba capitalized and eventually took the lead. “It’s a coaching (decision),” Robinson said on her being subbed out of the game.

CCC was able to maintain its control over the 49ers until the lack of substitutions or a dominant inside presence finally took its toll.

The Comet lead dwindled as the game continued, after CCC had taken a 42-38 lead into halftime.

Despite losing its last two contests, CCC is 3-3 in its last six matchups in the BVC.

CCC failed to consistently make their shots while the 49ers were nailing 3-point shots from all areas of the court. Robinson said when she was taken out of the game it broke the rhythm the team had built up over the course of the game.

Early on, Yuba had trouble passing due to CCC filling the lanes and getting steals. Yuba also struggled to stop Robinson.

“We drove the ball really well and talked a lot on offense and defense,” Robinson said.

Yuba’s focus on shooting from the outside was a familiar strategy because they implemented it in the BVC competitors’ previous matchup on Jan. 7.

Shaw said the plan was to get out on the shooters defensively and push the ball in transition.

He said they had a lack of energy to execute the plan throughout the whole game and couldn’t push the ball effectively.

“When we stop playing team ball and stray from the game plan, we can’t win,” Shaw said.

When the Comets were able to get rebounds and push the ball in transition Yuba had little answer defensively. The Comets’ offense was too fast for Yuba and they were able to get layups at will.

“I want them to go out and compete for 40 minutes, win, lose or draw,” Shaw said. “I want them to compete and, you know, have some pride. They need to finish the season on a good note by competing.”