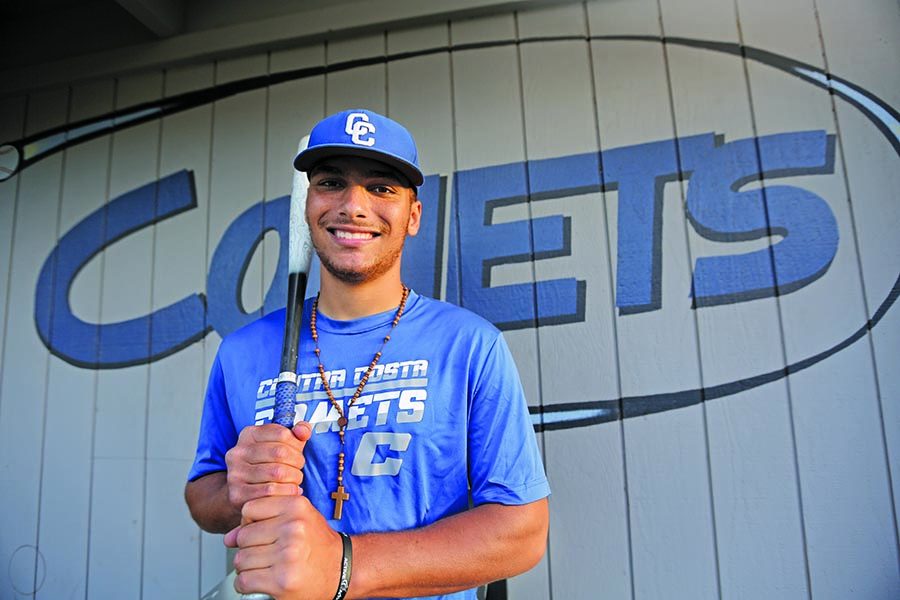 For 20-year-old Comet sophomore Eric Whitfield baseball is much more than just a pastime. His devotion to the team includes 15 hours of practice and five hours of weight training every week, on top of games.

He was born in San Carlos and raised in Millbrae. He attended St. Francis High School in Mountain View, where his team won the West Catholic Athletic League (WCAL) his senior year.

Growing up, baseball was a family tradition and his father Terry Whitfield was a first-round draft-pick by the New York Yankees in 1971.

His father was later traded to the San Francisco Giants, where he played four seasons.

In the middle years of his baseball career, the senior Whitfield, calibrated his focus by playing in Japan to master his techniques and become the best player he could be, bringing back what he learned to the golden state.

His 15-year professional baseball career came to a close in 1986 when he finished with the Dodgers, but the love of the sport lives on through his children.

Eric Whitfield plays catcher, outfield and first base for the Comets.

“I played summer ball with (baseball coach) Brian Guinn and liked the program and knew a lot of talented players on the team. I knew (former shortstop) Jamal Rutledge and a few other players here at Contra Costa College, so I already had an idea that they had talent and would be able to turn the program around,” Whitfield said.

Whitfield hails from a traditional family of six: two older brothers, one younger sister and both of his parents.

Following his stint with the Yankees,  his father was traded to the San Francisco Giants in 1977, his parents met and started their relationship that ultimately blessed them with four children.

Pitching coach Joshua Cephas said right now they are focused on broadening Whitfield’s expertise so he can effectively play catcher and first baseman.

“He’s getting better everyday. Just like anything you do, the more you practice, the better you get,” Cephas said.

Whitfield has a personality that leans toward the quieter side, but once you start talking to him he can speak for hours, the coach said.

His maturity has improved and he knows the game better and what to do at certain times in certain positions more than he did before.

Cephas said that what makes Whitfield a good player is his level of focus.

“Pitch-by-pitch he knows what it takes to hit, and how to get outs in certain situations,” he said. Growing up, his mother used to wake him and his siblings up to watch late night Giants games on TV, where he would study the pitcher-hitter showdowns.

Guinn said that although Whitfield is not as much of a vocal leader due to his quiet personality, he leads with his actions on the field.

A major setback in Whitfield’s life was when his grandfather passed away, which catapulted him into a closer connection with God.

Since then, he has been spending as much time with his grandparents on his mother’s side as he can, because he understands the importance of sharing time with his loved ones.

One of Whitfield’s magical moments was last year, playing in the City College of San Francisco series for CCC, where he caught a pop fly, then doubled back throwing the runner out who strayed too far off first base.

“I feel like that gave our entire team momentum and confidence moving into the season and it was the first time in many years that we started off with a winning record. It was fun to see the excitement of the entire team, and it was a special moment,” Whitfield said.

Comet outfielder Rome Watson, who has known Whitfield for three years and played with him in summer leagues, said he enjoys the fact that he’s such a positive person and tries to keep everyone’s spirits up.

“Whitfield is fun to be around and he’s not serious all the time. He’s lighthearted and has a good sense of humor,” he said.

Off the field, Whitfield likes to make jokes with his unique character, but still knows how to “click the switch on” to get into game mode.

“He is one of those people who has been able to embrace the teachings of coaches. I’ve noticed he’s evolved into a better listener over the last year, taking more lessons from his older teammates,” Watson said.

All fathers look to bond with their children in some way or another, whether that is going to the beach, taking a bike ride, or going to the park.

When Whitfield wants to bond with his father he makes his way down to the Future Pro batting cages in Burlingame, which his father owns.

“I go there when I want to free my mind from the stresses of everyday life and just have fun,” Whitfield said.

Looking ahead, Whitfield has his sights set on following in his father’s footsteps by playing at the professional level, but when he gets the time he would like to travel to Japan and visit the Tokyo Baseball Dome and ride on the Bullet Train.

Whitfield looks to touch as many lives as possible through the sport. He said he feels the strongest connection with the movie “42,” because it gave him a glimpse of what Jackie Robinson lived through.

It made him grateful for the changes Robinson brought to Major League Baseball by breaking the color barrier in 1947.