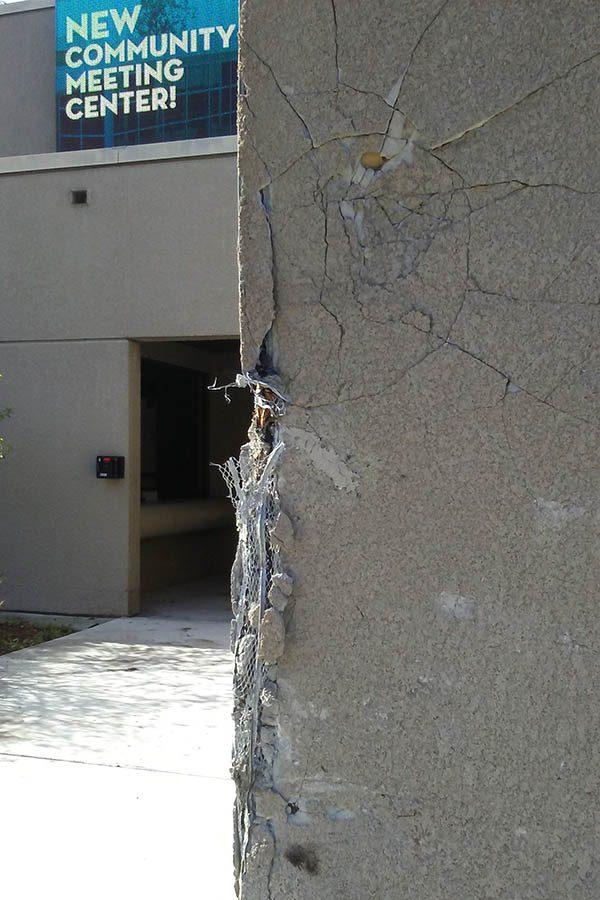 A car crashed into the corner of the Knox Center on Wednesday around 10:30 p.m. This is the result of the incident on Jan. 16.

In a hit-and-run, a car crashed into the Knox Center at the corner of Castro Road and El Portal Drive around 10:30 p.m. on Feb. 15, causing mild injury to the building and driver.

According to the San Pablo Police’s report, 29-year-old Jesse Alexander Hix Dunning was driving a gray Honda Accord westbound on El Portal Drive at a high rate of speed. He lost control when he rounded the curve on El Portal Drive, at the intersection with Castro Road.

Dunning was driving under the influence of alcohol, the report said.

He drove straight over the Castro Road median, then onto the west sidewalk of Castro Road, knocking down two stop signs on the way.

Dunning drove over the lawn, mowing down some shrubbery and a tree before impacting the corner of the Knox Center on the outside of the women’s rest room.

When the responding officer arrived the car was resting upside-down several feet from the theater’s front entrance, with its airbags deployed, the report said. The key was in the ignition, but the car was not running.

A witness who called in the accident reported that the driver had fled, and the report specifies Dunning exited the passenger side and fled on foot, northbound on Castro Road.

Dunning was soon contacted in the 3000 block of Mission Bell Drive and was identified as the driver by his own admission and the witness’s testimony, the report said.

It’s not certain when the car flipped over, but the report says up until the vehicle struck the tree there were still tire marks.

Theater Staging Specialist Travis Hiner said, inside, the car’s impact jolted all the mirrors and soap dispensers off the wall, leaving the floor covered in broken glass, and knocked some drywall loose.

The glass and other debris have been removed, and the bathroom remains open for use, if users don’t mind exposed pipes and insulation.

Hiner said, “We’re just trying to clean up as quickly as possible (and) make sure it’s not affecting students.”

The damaged rest room is an area of the Knox Center that was remodeled in the summer of 2016, during seismic retrofitting.

The outside wall is badly cracked and visibly deformed. Buildings and Grounds Manager Bruce King said one structural crossbeam needs to be replaced.

King said he had a contractor come out to give a quick estimate and the cost of repairs to the building will total around $5,700. “It’s not a big repair job,” King said.

King said when and how the repairs will happen depends on the driver’s insurance, which may be a problem because the police report says Dunning has no insurance.

King said the two stop signs were replaced by the city of San Pablo within hours. “It surprised me how quick they did it.”

Contra Costa College Police Services Lieutenant Tom Holt said the extent of his involvement with the crash was determining that there was no danger to the building or public, and the San Pablo Police Department had handled the incident.