Immigrant communities boycott and participate in demonstrations around the Bay Area. 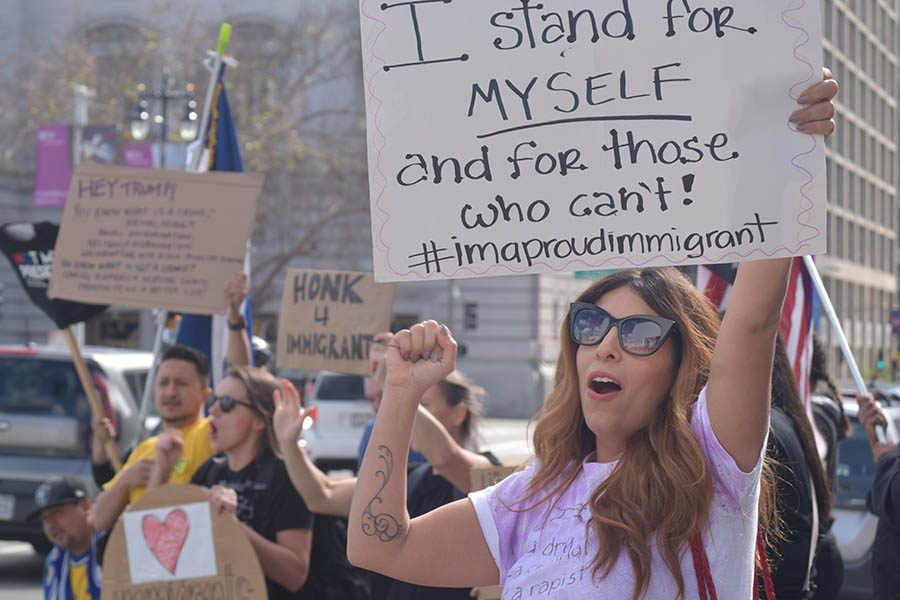 San Francisco resident Elena Sanchez hold her left hand up and holds a sign as she asks drivers to honk their horn in front of city hall in San Francisco, Calif. during a demonstration part of "A Day Without Immigrants" protest against Trump's immigration policies on Feb. 16.

SAN FRANCISCO — Across the nation, immigrants of all statuses and communities responded to a call on social media to boycott school, work, their businesses or any monetary transactions as part of the “A Day Without Immigrants” demonstration on Feb. 16.

Organizers said its purpose was to display a united effort against the Trump administration’s immigration policies. Protests were also used to highlight the large contributions, social and financial, that immigrants make to their communities every day.

Many protesters chose to silently stay home that day, but some took to the streets. At around 2 p.m., around 30 people stood on the Van Ness Avenue curb in front of San Francisco City Hall chanting and waving signs asking drivers to honk their horns for immigrant rights.

San Francisco resident Elena Sanchez held a sign reading, “I stand for myself and those who can’t” during the demonstration.

“I am out here in support for the immigrant community to call attention (to President Donald Trump’s policies),” Sanchez said. “Trump’s radical ideals have demonized the undocumented community and calling all of them illegal aliens is not reflective of all of their situations. Many of them have lived here for many years and this is their home.”

Sanchez said she fears that eventually someone like herself, who is a resident of the United States, would be targeted for deportation by Trump because she is an immigrant.

“If we stay quiet it doesn’t help — so we must make noise,” she said. “There are a lot of other people that out of fear are still working their jobs today. I am lucky enough to be able to take the day off and let people know how America would be without immigrants.”

Contra Costa College La Raza studies department Chairperson Augustin Palacios said, “The importance of protests like this work at different levels. People who participate in the protest or help organize get a sense of empowerment and of agency. It is a way to hope and to build something. It is not going to be one thing, one action, one boycott or one march that will change things, but the accumulation of pressure on the system.”

Word of the “A Day Without Immigrants” protests spread across social media with thousands of employees and business owners participating in the boycott nationwide.

Like many other business around the Bay Area, Discolandia, a local produce and retail shop on 23rd Street in Richmond, displayed signs telling customers that in solidarity with the boycott it would be closed for business Feb. 16.

Richmond resident, and owner of W&D Cleaning Services, Daisy Galicia closed her business for the day as well.

“I heard about the protests on social media,” she said. “I decided to participate because, legal or not, we are part of the economy of this country. Also I want my children to know that we are all equal.”

Immigrant groups and their allies have called for other protests since the Feb. 16 event. The second phase of the movement called for the boycott of Wal-Mart during Feb. 20-27.

Palacios said, “Movements have to be more strategic and (planners) don’t want to (do) things in a rush. I haven’t even heard of the Wal-Mart thing, and if I haven’t — and I look for this sort of thing — then I suspect many people haven’t either.”

Biology major Marisol Contreras said she saw a report of the Wal-Mart protest on television. It reminded her of the time after the election when she went to Mexico, saw anti-Trump news reports and read about a boycott on American-made products there. In response to Trump’s policies, people in Mexico have taken to the streets in their local cities to protest. Organizers there are urging people to participate in the boycott to strain the U.S. economy of the U.S.

Contreras said, “People were talking about not purchasing any American products. The Hispanic community here will catch on to that trend through social media.”

Contreras said she has not seen a wide direct response to the Wal-Mart boycott, but has seen some support of it in the local community.

Music major Felipe Garcia said, “I try not to get involved (in politics) so I don’t get stressed out. But I participate in protests like ‘Day Without an Immigrant’ and the boycott on Wal-Mart when I am made aware of them.”

Palacios said there is another “Day Without an Immigrant” protest planned for May 1.

“On May 1 there has been a long history of workers coming together. It is an important and symbolic day especially, since 2006.”

More than 200,000 people marched from Justin Herman Plaza to Civic Center in front of City Hall in San Francisco on May 1, 2006.