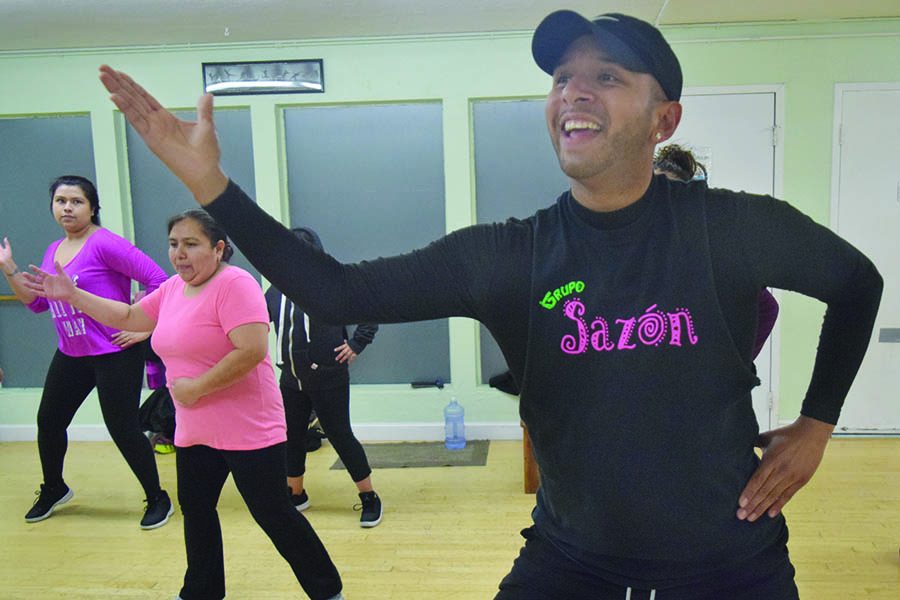 Zumba dance instructor Mauricio Enrique Duarte wants to use his love of dance and a psychology degree to help inspire and build confidence in other members of the community.

Duarte (also known as Kike, pronounced key-kay) is the 29-year-old son of first-generation immigrants from El Salvador and a psychology major at Contra Costa College.

“I want to get my psychology degree to help build confidence within people. I want to make sure that when I am done with school I can help my LGBTQ+ community, women who are in sick relationships and homeless youth,” Duarte said.

While working for a daycare center Duarte was required to take a child development class to continue working there. He began taking those classes at CCC during the fall of 2015 semester.

Duarte said that during his first semester at CCC he experienced a turning point in his life.

“I realized I was doing this for my job and not for me.”

He said, “I told myself if I am going to get a degree it is going to be for something I want to do.”

Duarte quit his job in December 2015 and became a full-time student at CCC during spring 2016.

Soon after starting his first semester at CCC Duarte joined the Puente Club. The Puente Club aims to better the lives of students who have been educationally underserved.

Counselor Norma Valdez-Jimenez said, “From my first meeting with Enrique, I already knew he had some great leadership skills.” Valdez-Jimenez also serves as the adviser for Puente Club.

Valdez-Jimenez said she really saw his natural leadership skills by his ability to walk into a room and instantly be able to tell who was on the margins. He would purposefully bring them in, empower them and welcome them into the Puente Club.

Duarte said, “One of my role models is RuPaul. One of the phrases she says that really touches me is ‘All of this that I do, I do it for myself.’ This to me means that we can only help people so much.”

He said that because a person can only help someone else to a certain extent, he wants to become an asset so people, themselves, can build their own legacies and go on to help others.

Valdez-Jimenez said, “Enrique is not about a project. He is about who he is and how he carries himself. He has a great ability to navigate in multiple worlds, and embrace and welcome everyone.”

Duarte said, “I want to have the resources to be able to help them build their confidence and show them that they can overcome what is going on at that moment. I want them to be able to climb the steps on their own.”

Duarte joined the RYSE Youth Center in Richmond around 2009, as a student member. During his time at RYSE he co-facilitated the opening of the first local Alphabet Group (LGBTQ+ group).

At the end of fall 2016 Duarte started CCC‘s very own Alphabe+ Club.

Duarte said, “I used to work at the Ryse Center in Richmond, and there we came up with the Alphabet Group. So when we started the club here at CCC I figured, let’s just keep it going.”

He said, “The GSA (Gay Straight Alliance) didn’t appeal to, or serve, anybody but the gays and straights, but (The Alphabe+ Club) includes everyone.”

The club’s adviser, Senior Executive Assistant Michael Peterson, said Duarte took it upon himself to organize everything the club needed.

“Enrique really helped the Alphabe+ Club re-emerge from its dormancy,” he said.

Even though the Alphabe+ Club is in its early stages, Duarte has big plans for the spring 2016 semester.

Duarte said, “This (Alphabe+ Club) is just a starting point. If you don’t feel safe about something, you can come to me. I know how hard it is to be in the shadows. I want to bring issues to the light. I want everyone to be able to say ‘this is who I am’ and not have anyone question it.”

Peterson said Duarte really tries to find inventive ways to make the club known, and that Duarte does the best to think outside the box. “He is a great ambassador for the LGBTQ+ community on this campus.”

Duarte said, “I really want this place to be like the Castro.”

Duarte said he grew up in a Latino culture where machismo was the norm. “I was bullied by my peers and at home with family while growing up, so I began using dance as an outlet and a way to free myself.”

Duarte has been teaching Zumba for eight years. He currently teaches a Zumba dance fitness class at the Dance with Sherry Studio in San Rafael four times a week.

Duarte said students at his classes and his community come to him for advice all the time. “They want me to help them with their diet plans, marriage and parenting. I just try to explain to them that I am only their Zumba instructor.”

Valdez-Jimenez said Duarte is a great inspiration to his peers and always finds a way to relate to them — people just gravitate to him.

He said he takes it very delicately when someone comes to him for advice. “I look at it as a responsibility. That’s why I need to go to school and get educated.”

“I am really thankful for all my professors and everything they did for me. Being part of CCC has played a huge role in pursuing my education,” he said.