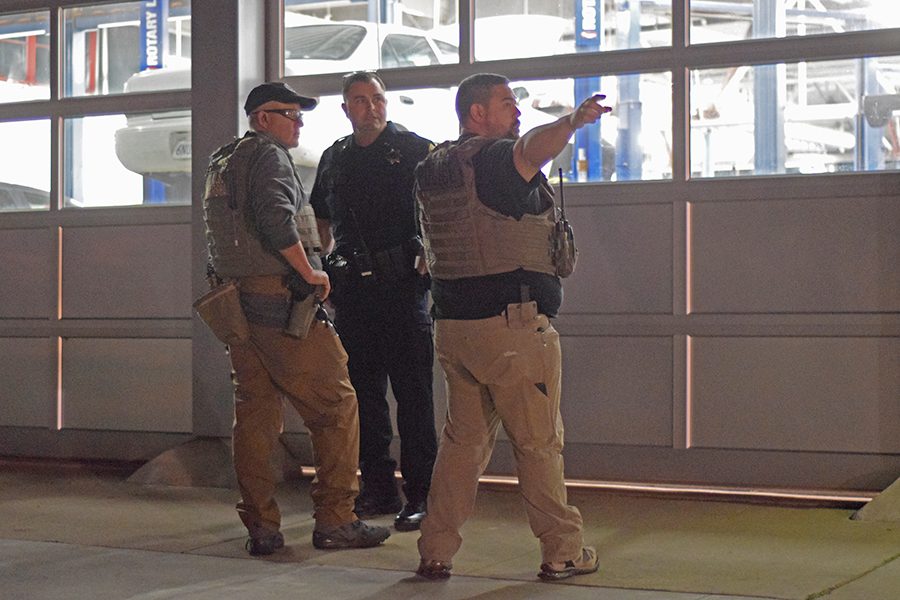 A local Fugitive Task Force was denied access to the Vocational Technology Building to serve a homicide felony arrest warrant of the City of Vallejo at Contra Costa College in San Pablo Calif. on March 1.

oA local Fugitive Task Force was denied access to AT-110 in the Automotive Technology Building to serve an active felony homicide warrant from the city of Vallejo on campus Wednesday night.

The suspect’s name is still unknown, although he is a murder suspect in neighboring Solano County.

“The local Fugitive Task Force is made up of officers from different police agencies, two of them being U.S. Marshals. They come together to serve a federal felony arrest warrant out of the jurisdiction of the (Vallejo) police department,” Contra Costa Community College District Police Services Chief Ed Carney said.

Police Services Lt. Tom Holt, who was on the scene when the marshals served the warrant, said, “I was restrictive with the marshals and did not allow them to run into the classroom because this is my jurisdiction. I wanted to be in as much control as (possible) as long as I was here. It is better, if there is a warrant for an arrest on campus, that I serve it because it is less intrusive and stressful to the classroom.

“I understand the student culture and this could be traumatizing,” Holt said. “I can’t say if (the suspect) was enrolled in the class or if he was a student because this information is protected under the Family Education Rights and Privacy Act (FERPA).”

Carney said he is sure this moment of overflowing police presence might be concerning to some, but there is no continuing or lingering threat to the community or students in the area. More specifically, the task force was not here to implement and enforce any federal immigration laws.

Automotive professor Bobby Sturgeon, who was teaching in AT-110, declined to comment about the suspect who was determined to be in his class.

Carney said the task force arrived at CCC around 6 p.m. They determined that the suspect was present in the Automotive Technology Building.

“The U.S. Marshals track, follow and will get a tip off from informants,” Lt. Holt said. “They also do background checks and find where they live, where they work or go to school. They knew the suspect was here and so they came.”

Holt met the task force and confirmed the warrant but denied them entry to search for the suspect inside the building.

While the incident was happening, students were blocked from entering the AT Building. The search also stretched the investigation into the adjacent the Computer Technology Center. At 7:17 p.m., after searching the AT Building, Holt conduced a search.

Business major Daniela Matute said, “I was walking toward the CTC Building for a 7:10 class but was not allowed to walk in by an officer. I waited with other classmates outside for about 15 minutes. We had no contact with the police other than one of them not letting us into the building.”