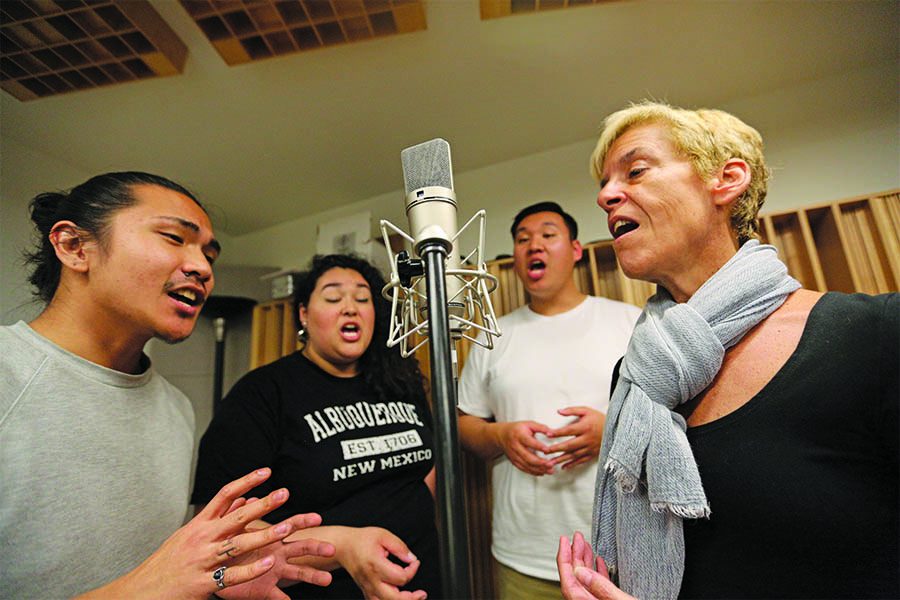 The group was also in the national top six among community colleges and universities to compete at The Monterey Next Generation Jazz Festival.

With a prestigious tone that exudes top notch vocals and stunning harmonies, Jazz-ology has become one of the most recognizable vocal jazz ensembles in the country.

Music professor Stephanie Austin said, “We never get tired of receiving the emails that notify us of our successes.”

“They are both prestigious. Whether it’s a DownBeat or being invited to the Monterey Jazz Festival, I am honored,” she said. “It’s a big deal and we are really excited.”

To be considered for the DownBeat awards, Dr. Austin sent in three recordings from Jazz-ology’s 2015 album “On a Clear Day,” including “He Was the Cat,” “Grain De Sons” and “How We See.”

A panel of instructors and professionals, who are unaware of which group is which to avoid favoritism, then judged the selections.

They critique each recording on phrasing, emotion, feel and the swing.

“They really listen to the quality of the recording and compare it to the standards of top musical groups like Pentatonix and the New York Voices,” Austin said.

The winners are awarded a plaque, as well as a spot in DownBeat Magazine for an ad representing their college’s music department.

“It’s like winning a Grammy, but that’s not why we are in it,” she said. “For the students it’s twofold because they are a part of a program that means something to them and they get an educational and professional experience.”

Laura Karst, who has been singing alto for Jazz-ology for three years, said winning something like a DownBeat award is a huge honor.

“I’ve never worked so hard and had so much fun in my whole life,” Karst said. “Dr. Austin does a brilliant job at teaching us these musicianship skills. They are stellar and help guide us.”

Since the creation of Jazz-ology in 2011 the group has won three DownBeat awards, with a total of five for the whole music program.

Austin has created an amazing vocal department, Karst said. “It’s sort of a cliche to say, but everything has been an honor and privilege.”

Laurena Alm, who has been part of Jazz-ology for two years and sings lead soprano, said it’s crazy to be up for, or even win, an award like the DownBeat.

“It nuts, someone, somewhere, listened to me on a recording and choose it over groups around the USA.”

Before coming to CCC, Alm said she had no vocal training, but being in the vocal jazz program and Jazz-ology has helped her become more comfortable with herself.

“It’s that we hold each other responsible and take care of each other,” she said.

“It’s a weird feeling of trusting in someone else’s skills just as much as your own.”

The presentation of awards will culminate at the Jazz Gala concert at the end of the semester, which will feature performances from the whole music department in the Knox Center.

For the Monterey Next Generation Jazz Festival, things are a little different, Austin said.

They were asking for a live recording of the group that will be performing at the festival, she said.

They reviewed the group and recording and sent invitations to the best in the country.

This year the six finalists are all from colleges and universities in California, including Cal State-Sacramento, American River College and College of the Canyons.

The festival will be judged in categories by people in the industry using a rubric to tally the score for the winner.

There is no way to really prepare for something like Next Generation, Austin said.

“The groups that do really well have their A-game going all the time. They practice at that level all the time,” she said.

“We won’t be changing anything we have been working on this semester,” Austin said.

“I’m hard on them. It’s like I’m the coach who is preparing them for a huge game.”

Joseph Saeteurn, who has been a part of Jazz-ology for two years and sings tenor, said it’s a fun group to be in but it’s a lot of work and commitment.

“It brings a sense of joy and comfort to be able to do what I love,” he said.

Monterey Next Generation Jazz Festival is a big part of the jazz world, Saeteurn said. “It’s an honor to be invited.

“It’s different from other festivals we have performed at because those aren’t judged like Next Generation,” he said. “Festivals we perform at are normally relaxing and we are just there to show people what we’ve been doing and get feedback.”

But Next Generation is a competition, he said. “I’m excited to compete and see groups from all over the United States perform.”

Austin is an amazing teacher and really helps their musicianship, Saeteurn said.

“She really tries to put our mind set in the frame of a performance when we are rehearsing.

“It means a lot to me to be a part of Jazz-ology. I am very grateful,” he said.

NinoAngelo Lastimosa, who has been apart of Jazz-ology for a year and sings baritone, alto and tenor, said it was a very humbling experience when he found out Jazz-ology was invited to compete at Next Generation.

Everyone in the group had to agree to compete before Austin accepted the invitation, Lastimosa said.

“A lot of polishing and a lot of musicianship has to go into preparation for the festival.”

“It’s going to take a lot of hard work but we get to walk the red carpet and live the experience,” he said.

“It’s with Austin’s coaching. She’s there to keep us uniform and teach us how to be independent as a musicians.”