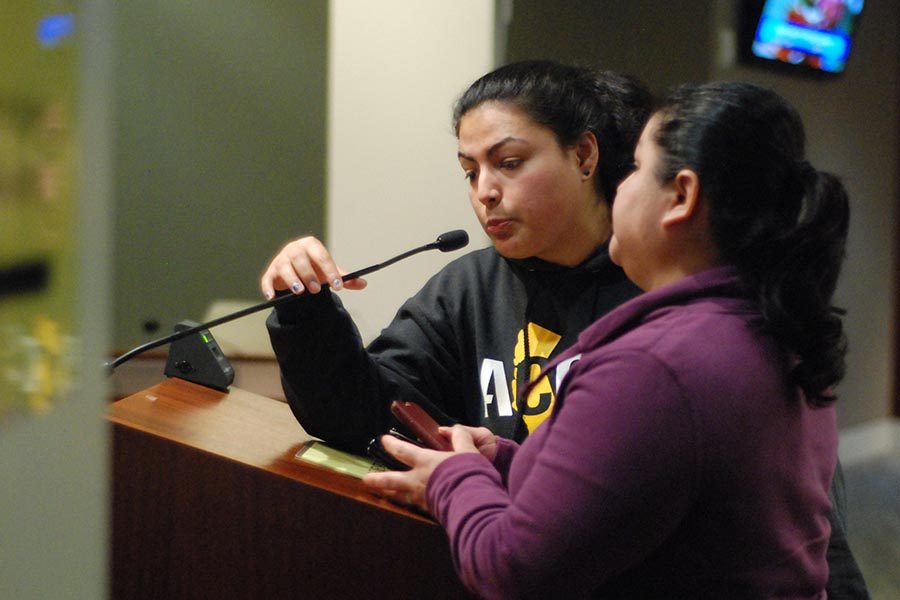 RICHMOND — Community members and leaders rallied to express their opinions about the implementation of Measure L and the nominations to the required rent control board during a City Council meeting in the Civic Center Plaza here on March 7.

Measure L, passed by Richmond voters in November 2016, establishes a need for “just cause” to evict tenants, creates a rent board to monitor evictions and limits how much landlords can increase rent for their tenants.

Richmond Mayor Tom Butt decided to retract his nominations for the rent control board after the City Council was bombarded with comments about rent control during the public comment session of the meeting.

“There is a communication issue between the mayor and the people,” Laidman said as he held the floor during the public comment. “The mayor easily hears the voice of the money front. He listens to the CAA over the people.

“Richmond City Council passed the rent ordinance and the CAA used money and lies to try and overturn the ordinance.”

He said people in the community organized such a successful petition campaign that Butt must appoint people to the rent control board who will uphold the will of the people.

Butt said it is the sole responsibility of the mayor to place the nominees into the agenda.

“It is up to the council to approve them, but without a compromise between the people, the RPA and the mayor then nothing will happen,” he said.

Butt added the RPA is continuing to use their community organizing tactics to exploit the fear residents have when it comes to high rent so they show up at City Council meetings to complain about the lack of a rent board.

“The people must realize that the lack of a rent board is not the core of the problem,” he said.

Butt placed five nominees to the rent board on Tuesday’s agenda and said he “was willing to let the City Council go through them one by one and approve or reject each one, just to try and get the process started.”

To keep the meeting short, Butt asked the community members in attendance to keep questions about rent control to a minimum during the public comment section.

Butt said they could address this issue at another time.

When more and more community members spoke about rent control matters while holding the floor, Butt said he would withdraw his nominations.

Richmond resident Scott Anderson said he was notified that he was  a the nominee for the rent board a week prior to the council meeting and partially agrees with Butt.

At the meeting, Anderson said, “The voters passed it (Measure L) with majority approval. That speaks to the relief that people need.”

Anderson said while he understands there is a need to help Richmond residents by keeping their housing costs affordable, Measure L does not protect every renter.

“Me and my mom are struggling with rent, but because we live in a single family home, Measure L will not (protect us).”

Anderson said while studying economics at San Jose State University, he learned that rent control is a short term fix that could cause long term financial damage to the city.

“Rent control has been implemented in other cities and countries but it has not solved high rent prices,” he said. “The solution is to have a group of people who are non-biased and willing to see the situation as it really is.”

He said problems within Measure L that need to be taken into consideration are:

n Landlords will have to cover additional fees, but they will have to get the money from somewhere else to pay them.

n Landlords could allow their property to “rot” and tear it down and not be eligible for rent control unit rates.

“The problem starts all over after that,” Anderson said. “There needs to be a group of people on the rent board who will explore all possibilities to create better housing for Richmond and not settle for a short-term fix.”

Alliance for California Community Empowerment (ACCE) Action Organizer Edith Pestrano said since 65 percent of Richmond voters called for rent control, she expects a rent board that will uphold the rent control law.

At the March 7 meeting, members of ACCE and the RPA organized a group of people from minority communities who will benefit from rent control to speak to council members.

Pestrano helped translate for many non-English speakers as they were called up during the public forum to address the council members.

She said they are making sure the voices of the local community are heard by city officials.

Richmond resident Ana Gonzalez said, “I am here because I want to ask those who I know have the power to make decisions to have rent control.

“The officials have to select people onto the rent board who are supportive of rent control and who want to build something long term,” Gonzalez said. “The law has already passed and it is time to support it.”