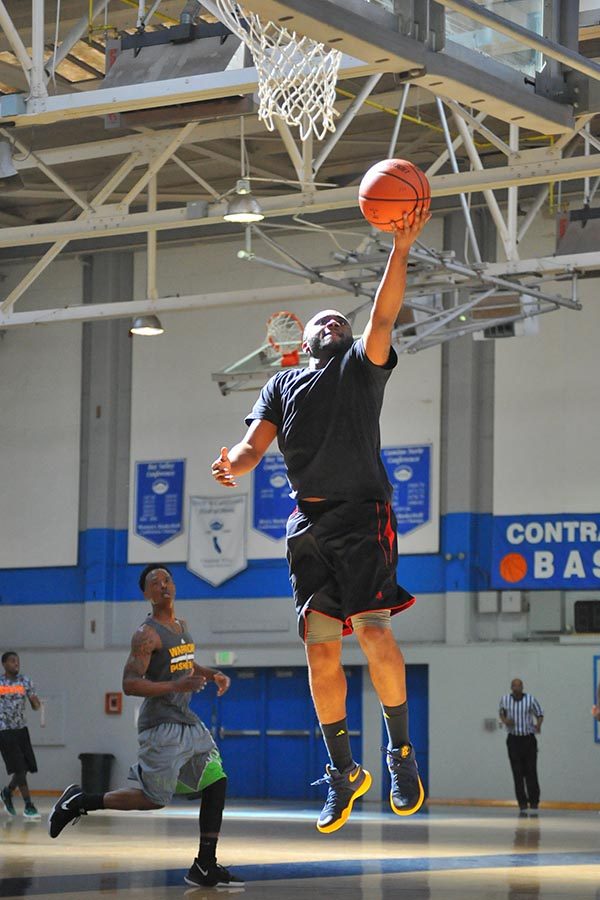 A player goes up for a layup during a basketball tournament fundraiser for late Demarcus Doss' family in Contra Costa College's Gymnasium on Saturday.

In recognition of the selfless act of heroism committed March 9 by Demarcus Doss, family and friends gathered to participate in the “Demarcus the Hero” basketball tournament on Saturday in the Gymnasium.

During the shooting, Doss used his own body to shield his female passenger from further harm, sacrificing himself in the process.

The 24-year-old was pronounced dead the following day at at John Muir Hospital in Walnut Creek at roughly 3:30 p.m.

“I’m not surprised by his last act at all. He knew there was the possibility of dying but without any time to decide at all he did the heroic thing,” Doss’ brother Kellis Love said. “We want the media and the community to know that he was a good man. If they didn’t know before, (judging by the turnout) they do now.”

Love, who played basketball for the Comets in 2007-08, knew there was a lot of support for the family in the athletic department and reached out to CCC coaches to hold the tournament in the Gymnasium after being given the idea for the event by his younger sister.

Comet men’s basketball coach Miguel Johnson said, “Kel (Kellis) is a former player of mine and called me with the idea. I was more than happy to oblige in any way that I could.”

Fliers began to circulate Tuesday for the tournament. The entrance fee was $100 per team and by tipoff, 10 teams had registered to play. Tickets for spectators were $5 at the door and nothing at the snack bar was over $3.

People filled the Gym for the Saturday event. The limited seating left players and spectators sitting or standing around the court, with a clear view of the action.

Players of all shapes and sizes played two full court games simultaneously complete with referees, cheering fans and all of the things that make up a true tournament.

The outcry of support with friends and family remembering Doss’ positive influence, more than dispels the label of “gang violence” that was how many in the news media described the shooting.

Doss’ father Kellis Love Sr. said, “The outpouring of family, friends and community who are all here does my heart good to see that he touched so many people. I haven’t taken it all in yet. I’m full of love right now, but love is an action word. The amount of support that came together here, in just four days notice, backs up everything everyone says about him being a special person.”

The event brought together generations of community members, from children barely large enough to hold a ball, to musical artists familiar to the area but more importantly familiar with Doss.

Rapper IAMSU said, “It’s always important to come together, but this time it’s for a really sad reason. I just wanted to come here to pay my respects and to keep it lit for the family.”

As the number of teams playing in the tournament dwindled to two, the main rims were lowered in the Gym and the championship game was played on the regulation college court. In the end, nobody knew the name of the team that won, however, everyone knew the cause that every participant played for.

After the championship trophies were awarded, one of the players on the winning team, Jamari Devertevil, who made one of the best suggestions of the day.

“We just needed to get out here and run for (Doss). It was such a sad situation. We really should do this every year.”

“He passed away on my birthday, March 10, I think that it would be a good thing to do this every year.”