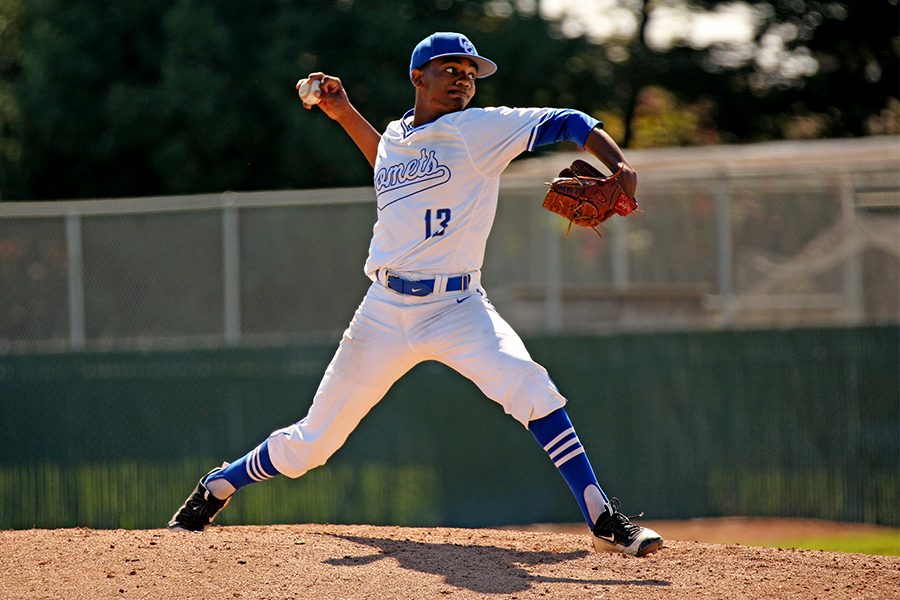 Comet pitcher Jayson Summers throws during CCC’s 6-0 win against Yuba College at the Baseball Field on March 11. Rain delays have forced the Comets to cancel many of their home games during conference play.

The baseball team has been forced to cancel multiple games this season due to inclemate weather.

The Comets get another chance at victory when the team faces Mendocino College Thursday in Ukiah.

The only highlight over the three-game Laney series was an explosive bottom of the ninth in the first game of the series, where Contra Costa College scored eight runs to win 12-9.

The outburst didn’t end up setting the pace for the next two games where CCC was outscored 13-0 in the second game and 4-1 in the third game.

CCC is currently slotted in sixth place in the BVC with four conference games remaining on its schedule.

In the third game of the series, Comet left-handed starting pitcher Tyler Reames demonstrated that CCC has what it takes to compete against the best teams in the BVC by keeping its opponents runs to a minimum.

However, in the fourth inning of the same game, Laney freshman Broderick Reed doubled to center field and eventually crossed the plate to tie the game 1-1.

Even with Eagle runners on second and third with no outs following the score, Reames didn’t allow another runner to advance by keeping all of his pitches low and letting his infield lock down on defense.

“This series was of utmost importance and we battled back, but we came up a little bit short, and we can do a lot better,” Reames said.

With one out, following Reames’ strikeout of Eagle right fielder Kameron Proctor, Comet shortstop Justin Summers defense on a sharply hit ground ball helped get CCC out of the inning.

After scooping up the grounder, the freshman held the runner at third before firing the ball to first base to record the second out of the inning.

A pop up forced by Reames ended the inning.

The Comets committed 11 errors throughout the series, however, errors are not main issue preventing the Comets from gaining momentum.

A recurring problem with CCC’s offense in conference play seems to be not getting enough runs to maintain a healthy lead.

When this happens, it does not allow the starting pitchers any margin of error throughout the course of a game.

Although the Comets jumped out to the lead in the first inning of the third game by way of a solo home run by infielder Elijah Smith. CCC couldn’t string together rallies, most importantly, when runners were in scoring position.

“They’ll be a lot stronger going into the next series. They don’t take a tough game like today into the next game, they find a way to just let it all go,” pitching coach Joshua Cephas said.

First baseman Eric Whitfield said that although the Eagles were able to put up with the Comet’s pitching,

CCC learned what they need to do defensively at this point in the season to continue to improve.

Their four runs were scattered throughout the fourth, sixth and seventh innings.

As the rain dissipates, CCC will finally return to the field in an attempt to get its season back on track.

With just two consecutive wins during this season, CCC searches to get back on a winning streak, so it can surpass last year’s 12-22 season record.