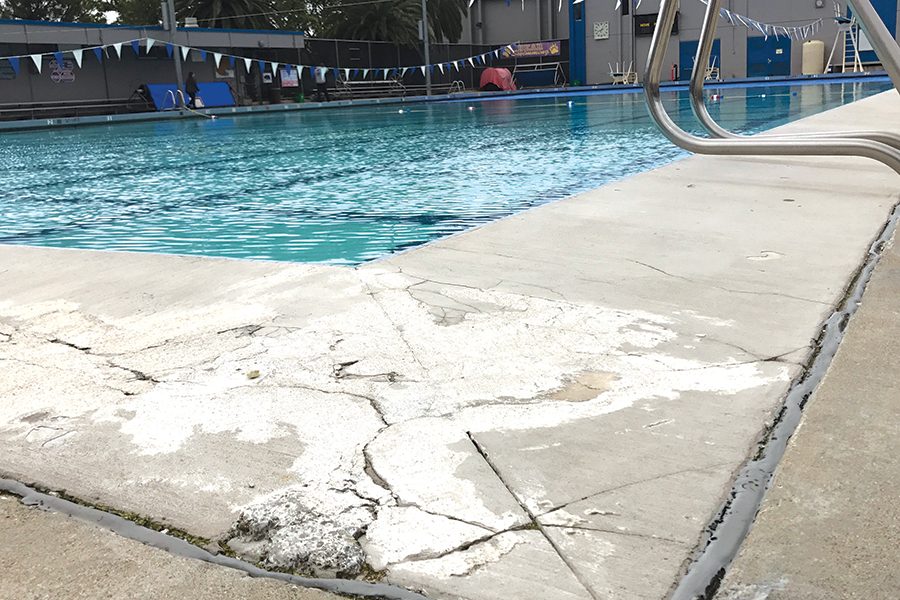 A corner of the Pool edge shows cracks that have created an uneven surface close to the edge. More cracks can be found throughout the cemented area around it.

The college Pool will soon undergo renovations to the deck surface and edges due to moderate cracking and chipping.

“The cracking and chipping on the edge of the deck is caused by the wheels on the tarp reel falling into the Pool and the ground movement due to the nearby faults,” physical education professor Jim Ulversoy said.

“The last major renovations that were done to the Pool were completed in 2004 when the they replaced the tile inside of the Pool,” Ulversoy said.

Buildings and Grounds Manager Bruce King said, “Leftover funds from Measure A, a bond passed by voters in 2006 to upgrade local schools, will pay for the resurfacing of the edge of the deck by the Pool.”

The Measure A funds are the same funds that were used for the construction of the Student and Administration Building and the General Education Building.

“The renovations will be solely focused on the edge of the deck, but if there’s enough money we will try to resurface the whole deck,” King said.

The renovations are mainly being done to quell the concerns of swimmers who feel they may get hurt while walking around or getting in and out of the pool. Some students have already obtained minor scrapes in the area.

“There isn’t anybody that I have heard of or seen get hurt while around the Pool,” Middle College High School student Malea Reeves said. “Honestly, the Pool has always looked the same. It’s just the pump that broke and we haven’t practiced in weeks so championships are going to be a struggle since the other teams are way ahead.”

King said the Pool pump broke over a week ago and that they ordered a new one April 19 and that it should arrive in seven to 10 business days.

He also said that there is no timetable for when repairs to the deck will take place.

“The Pool is used for 11 months of the year. The only time it is closed is during winter break,” Ulversoy said. “The Pool is used by high schools, students here at the college and its open to the public during the summer time.”

King said that pools are very expensive to maintain, but that this renovation will help the facility maintain its status as one of the better pools in the area.

“This Pool was built in 1970 and was opened in the spring of 1971, so it has been used heavily for many years,” Ulversoy said.

The architect that is overseeing the remodeling of the Gymnasium, Gym Annex Building and the locker rooms is also in charge of the Pool project.

For now, King said, the Pool will stay in this condition but will receive its much-needed attention within the next year.