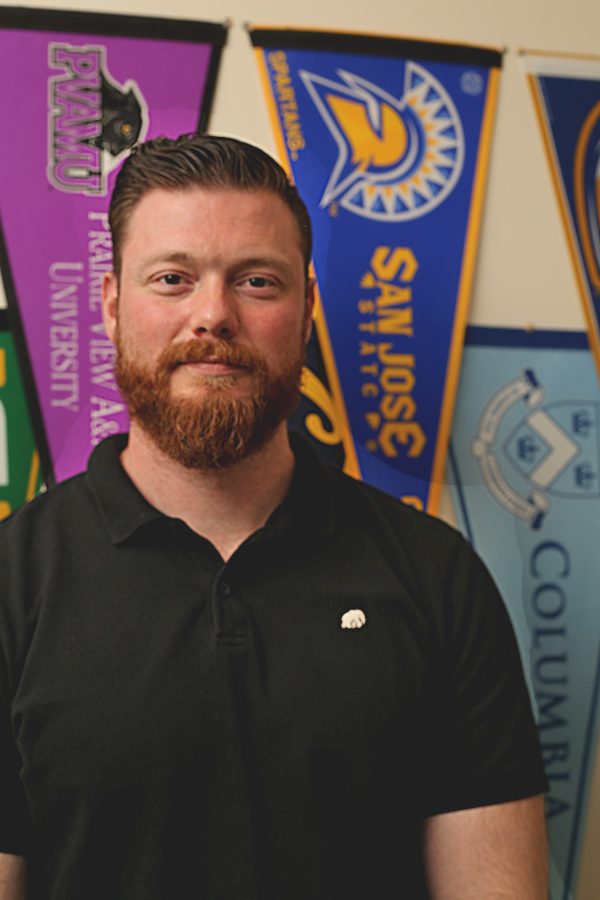 Contra Costa College speech professor Joseph “Randy” Carver stands in front of felt pennants of universities he has attended and universities that his speech students have transferred to in his speech lab, on Monday.

While sitting in his high school vice principal’s office speech professor Joseph “Randy” Carver was told, “School is not for everyone. You should pursue other venues in life.”

He grew up in San Antonio, Texas as an avid comic book reader and military school student.

He attended Texas Military School from kindergarten until his junior year of high school.

At that point he was transferred to McArthur’s public high school.

“I went to school with the same group of 20 people for the majority of my life. Transferring to a (large)public school left me feeling completely lost.”

Carver said there was never a pivotal moment in his high school experience because he was never there.

“I wish I had put in as much effort into school as I did in avoiding campus police and my teachers,” Carver said.

“It is shocking to look back as a professor and notice how many of those teachers did not belong in a (high school) classroom.”

Contra Costa College speech department Chairperson Sherry Diestler said that Carver’s wide range of interests and experiences are what helps him to be a great speech teacher.

Carver said that his study of rhetoric in college made him learn to question things. That is when he wrote a college paper at Texas State about Captain America.

“My dad used to just hand me Batman, Superman and Spiderman comics. Anything that I was interested in he would a find a comic about it.”

“If you read any of the classic ‘Superman’ comics they show you in a pretty clear cut way what is right and what is wrong. And those comics are what began to shape me,” Carver said.

Speech tutor Will Jackson said, “Randy is great with bringing pop culture into lectures to keep students interested. He does a great job.”

Diestler said, because of his past experiences and his interests, he is truly able to relate to a student’s passions.

Carver said growing up with comics helped him shape his perspective on society, power, privilege, life and how things in the world work.

He said that while living under the social pressures of conservative Texas, he was able to find inspiration and an outlet through comics.

“I was able to see a deeper perspective of life,” he said. “It took me seven years to get my (bachelor’s degree).”

Carver changed his major many times before “finding a home in the speech department.”

He said, “My entire journey through school was me looking for a home.”

Carver received his master’s in communication from TSU.

“I was there to teach my students speech, but they were teaching me about power, privilege and whiteness,” he said.

Carver said that he got to see both sides of the racial and financial spectrum while teaching in Texas.

Jackson said, “I am transferring to Berkeley in the fall and I owe that to Randy (Carver). Communication can be really boring. But he goes above and beyond to make it fun.”

Carver joined the CCC faculty in the fall semester of 2014.

“He is super creative and has brought great changes to our department,” Diestler said.

“He is the whole package. He is professional and engaging. I knew that his experience at PVAMU would help him connect with our students.”

“He’s revamped the speech lab by filling in all the open spaces,” she said.

When Diestler goes on sabbatical next semester Carver will take over as department chairperson.

Jackson said, “He’s the Superman of speech. Randy has a perfect score on ratemyprofessor.com and he’s truly earned that.”