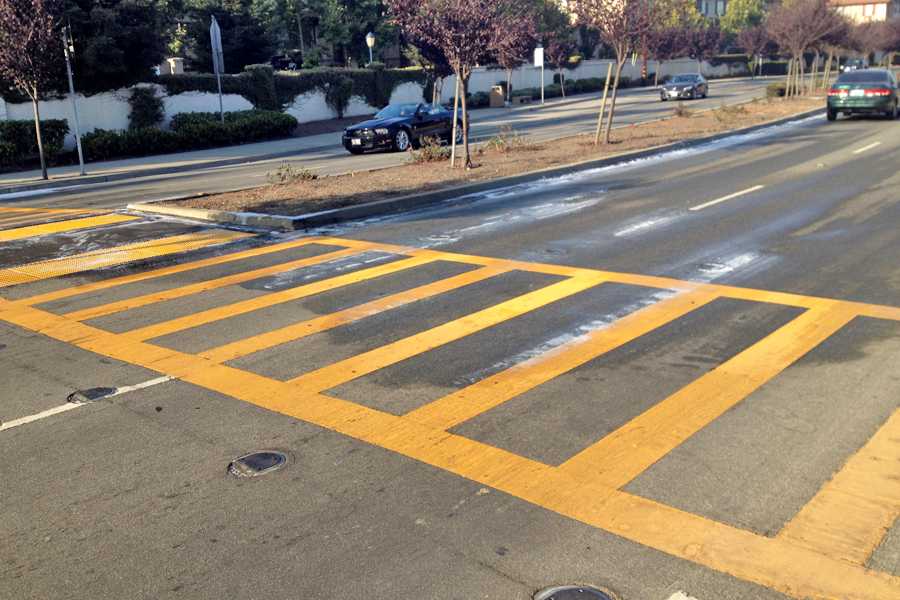 The crosswalk on El Portal Drive leading up to Contra Costa College was the site of a possible suicide at 5:30 a.m. Wednesday.

By Lorenzo Morotti and Jose Jimenez

A suspected suicide shut down the crosswalk and street on El Portal Drive near the Knox Center about 50-feet from the intersection of Castro Road at approximately 5:30 a.m. today, San Pablo Police Officer Jeremy Johnson said.

The crosswalk’s safety lights and audible sensors, meant to protect pedestrians from automobiles, however, were not functioning weeks before the fatal incident and weren’t functioning this afternoon after The Advocate checked them today.

Johnson said he is unable to disclose the victim’s name due to the unusual circumstances surrounding the incident.

He said the San Pablo Police Department is working to contact the victim’s next of kin.

Sgt. Brian Bubar, of the San Pablo PD, was at the scene of the fatality. He said the incident was not a homicide and is unable to release any detailed information regarding the incident until the investigation is completed.

Police Services Chief Charles Gibson said the incident falls under the jurisdiction of the San Pablo Police because it occurred off of the Contra Costa College campus.

Gibson and Police Services Lt. Jose Oliveira both said they are unable to disclose any information about the event.

A cleanup crew began to wash the site of blood with water and cleaning chemicals at 8 a.m.

By 8:30 a.m., police and first responders finished cleaning the area and re-opened the crosswalk and El Portal Drive to traffic.