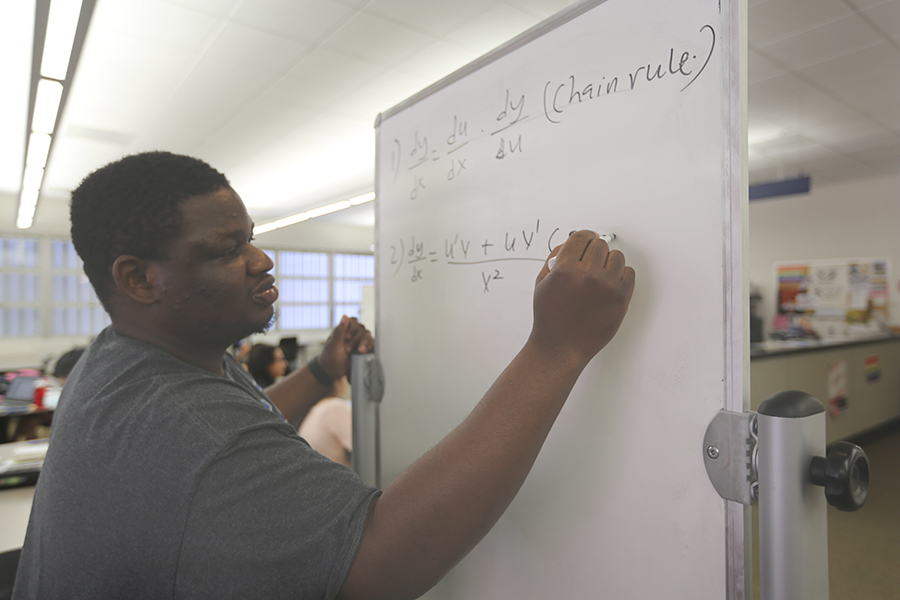 Robert Clinton / The Advocate Comet lineman and calculus tutor Barnabus Jime solves a calculus equation with other Comet football players during a tutoring session in the College Skills Center on Monday.

It is said in football that it’s always better to retool a program than to rebuild one. Since Comet football coach Pat Henderson was tapped to lead the team, its infrastructure is being slowly reworked to better meet the needs of student-athletes.

“It’s really just sitting down and getting an idea of what is important. Last year we had a few kids slip through the cracks because of their workload or because they were enrolled in classes that they were not ready for,” Henderson said.

“At this point there is an emphasis on getting caught up with studies and providing the resources to do it, even if it means missing time on the field.”

Henderson said he wants his players to be prepared to transfer to four-year colleges, if and when the opportunity presents itself.

“When the chance to transfer arises, I want them to be ready,” Henderson said. “If they aren’t — it won’t be because of a lack of support.”

Changes in the program were immediate yet subtle, beginning with the offseason program.

Campuswide Tutoring Coordinator Brandy Gibson said she had a great relationship with coach Carter and that Henderson brings players in once or twice a week for study hall.

Under Henderson, Gibson notices an increase in the time athletes spend in the College Skills Center.

“When Pat (Henderson) was hired, he immediately made contact with me and expanded the time that the football team spends in study hall,” Gibson said.

“He made a point to schedule time in the (College) Skills Center that works with the players’ schedules. Right now, players are spending four to 10 hours per week in study hall. Hopefully the increase in time translates to better grades in the end.”

There is more discipline than before, which should aid in their success on the field, Gibson said.

Members of the football team who also played for Carter see the differences in the two coaches’ actions toward academic progress as well.

“There are consequences if you don’t show up to study hall. Everything has ramifications,” sophomore running back Jerald Daniels said.

“On the field, it’s more of the same. But it’s more serious academically — that’s the good thing about coach Pat (Henderson).”

With all of the turnover in community college football, a new crop of athletes is taking part in this refocused approach to collegiate football.

“It begins with making sure students are developing academically in the right classes — math, English and science,” offensive line coach Alex Belinger said.

“Athletically, on the field, we’re still speed training and weight training. Getting bigger, better and faster, that’s our goal.”