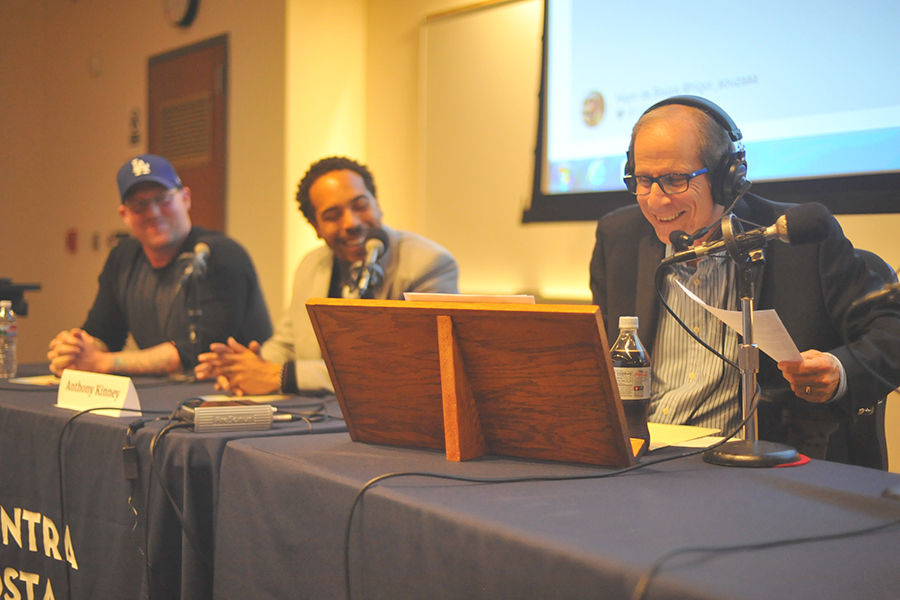 People packed GE-225 at Contra Costa College on April 26 for the 9 a.m. broadcast that featured three segments centered on President Donald Trump’s administration, veterans’ transition from the battlefield to the classroom and also the “Richmond Renaissance,” a play produced by the local nonprofit Richmond Ryse Youth Center.

The event was a first for the college and the mixed audience, which was comprised mostly of older public radio listeners who offered a more breadth of knowledge than most events on campus.

“KQED called and expressed interest in broadcasting from campus. I emphatically said we were more than interested,” Senior Executive Assistant to the President Michael Peterson said. “Any collaboration between the college and local media is welcomed.

“It helps highlight the different programs and services that we offer.”

The forum started on time, and dove into the deep end of the political pool covering immigration, health care and the feasibility of actually building a wall on the U.S. southern border with Mexico.

The show, hosted by author and professor Michael Krasny, was headlined in its first segment by a three-person panel operating at varying depths of the political spectrum.

Business major Angelica Espinal said, “As a member of this community, whose parents are immigrants, it is important to join the conversation and to represent minorities, or as some say, aliens.

“Whether they like it or not immigrants have a tremendously positive effect on small local businesses,” Espinal said. “Honestly, I didn’t even know this event was taking place.”

The show smoothly transitioned between topics, and used the few moments of commercial time to rotate panel members and for attendees to stretch.

Engineers from KQED visited the campus one week prior to the broadcast to test for accessibility, acoustics and web access capabilities.

“Set-up here was pretty easy. Two of us got it done last night at about 6 p.m. It took about two hours,” KQED audio engineer Danny Bringer said. “We did a show in San Rafael recently and the Wi-Fi failed. Today, everything ran smoothly.”

Veterans Affairs and the complications many face while transitioning back to civilian life filled the second segment of the show, paneled by three current students who each served overseas in the military.

Tagala said although it has been rough at times, since enrolling at CCC over a year ago, his life has improved. However, all on the panel agree that the Veterans Resource Center on campus offers a space to bond and share camaraderie with fellow service men and women.

Members from the Ryse Youth Center, an organization that encourages social development in the lives of underrepresented youth, ended the show promoting their third production of the play “Richmond Renaissance.”

The show paid homage to the community’s cultural past as an epicenter for blues, jazz and zydeco music by opening with a live performance by one of the actors in the production, Nya Bingazhani.