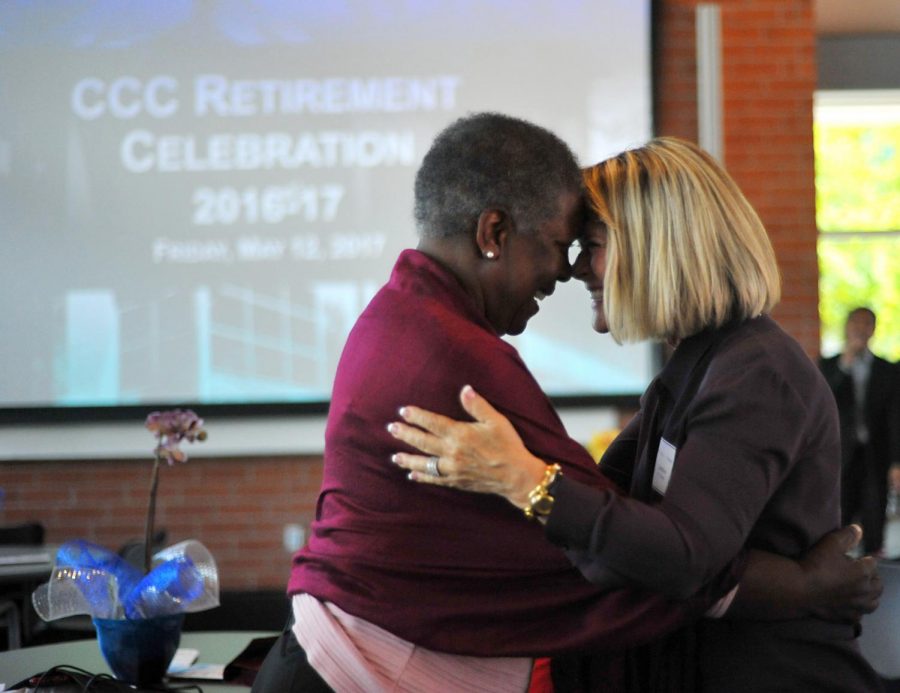 Heartfelt words from friends who, through the years, became like family spread through the walls of the Fireside Hall on May 12 to honor and celebrate the hard work of a group of retirees who spent more than a combined 200 years serving Contra Costa College.

“This is an incredible graduating class,” President Mojdeh Mehdizadeh said. “Contra Costa College prides itself on its sense of family. And our family — those who we celebrate today, those who have previously retired and those who continue to serve this wonderful college — really create that sense of family and make up a warm and welcoming place (for students).”

Colorful orchids decorated the tables around which the retirees, their friends and family, and current and retired faculty and staff gathered to listen to memories of each retiree from those who were chosen to introduce them.

Introductions given by a colleague of each retiree allowed the crowd to gain insight about each of them, as well as hear interesting, funny or sad memories.

Dean of the Liberal Arts Division Jason Berner introduced Roth, who taught at the college for 37 years.

“When you think about that, she’s been here longer than buildings,” he said. “I don’t mean this building (Fireside Hall), I mean the Applied Arts Building.”

Berner brought laughter to the crowd throughout his speech.

As part of an inside joke about a conference he attended with Roth, Berner gave her a pair of Crocs.

“Four years of Heather Roth is like 15 years of anybody else. I had the opportunity to observe her teach one of her classes,” he said. “And I can honestly say she is the best teacher at the college.”

Berner said, with a laugh, that he does not believe she is really retiring.

Former CCC president McKinley Williams introduced Dr. Floyd and said she was fully invested in her work at the college.

“You always want people to be there in a solid way,” Williams said. “To be there as committed as you (are) with the work ethic that you have. Donna would be in her office as late as I would be in my office, and I thought I outworked everybody here on campus. She worked, I must admit, as hard as I did.”

Mehdizadeh, as she introduced Murphy, said, “It’s so wonderful for me to introduce a fellow geek. A geek is a good thing to be.”

In his comments, Murphy said when he decided to retire, something in his head went click. “It surprises other people, but I just wanted to hang out with my wife.”

After serving the CCC community for 27 years, Everhart said she will come back and visit.

“When I do (come back) I will be making sure that you all have brushed and flossed. You all know I used to travel around with my lights to check your teeth below to see if there was plaque there,” Everhart said.

Mickles said she was able to learn more about CCC because of Everhart’s guidance.

“She took me under her wing and shared things about how to get through things here.”

“I met Susan about a year or two after I started working here, which was 1993, and I was quickly struck by her haircut. Believe it or not, I tried to copy her haircut, and I (like Lee) also went back to school to get my doctoral degree.”

Floyd said Lee has been an inspirational asset to the college.

“As a leader, she inspires confidence and respect. She didn’t know it, but she was a role model for me,” Floyd said.

As Seidler took the podium, tears filled her eyes after words spoken by journalism professor Paul DeBolt, who introduced her.

“I think Ellen truly sees (her retirement) as a graduation. She is such a skilled cinematographer and videographer. It is in her blood. It is part of her and she is going to continue to do that. And she will continue to make us all proud,” he said.

“Thank you for all you have done for our students, for our college, for being here for 22 years. We wish you many, many more years of happiness and productive living” DeBolt said.

The CCC family is also saying goodbye to its first openly gay faculty member, Figuera, who first taught at the college in 1985 and served as the electronics department chairperson. He also served as an adviser for Bisexual Gay Lesbian and Dear Friends United Liberation (BGLADFUL) club in the early 90s.

Figuera said his field requires constant updating because things change every few years. Noting that his retirement will give the college a chance to re-tool its curriculum in computer and communications technology, he said, “It’s a good time for me to leave.”