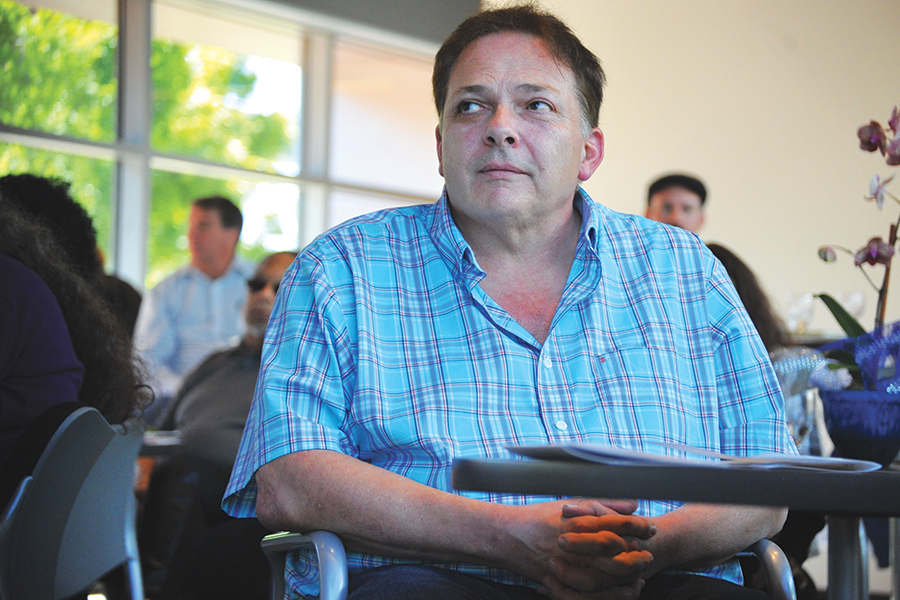 An educator’s job can consist of several different elements that shape the lives of students as well as the communities they serve.

For computer and communication technology professor Rick Figuera, these ever-changing elements of perpetual reinvention and dedication have sustained his craft, as he became a standout among Contra Costa College faculty and staff.

With 32 years of devotion to the successes of his students, and on the forefront of moving the campus forward technologically, his contributions will forever be embedded in the history of CCC as he retires from teaching in June.

Born and raised in El Cerrito, Figuera grew up with a fiery mind, finding interest in books and electronics while excelling in school.

“I was into academics. It was just a natural thing,” he said, “I loved learning about new things, and knowing how things worked fascinated me.”

He recalls, with joyous eyes, a time during his childhood when he watched a television repairman fix an old rundown set.

“That was my first experience — when I found an interest in electronics.”

Figuera attended El Cerrito High School, and while a senior there began taking classes at CCC. It was the proximity and the diverse appeal of the college that caught his attention, he said.

“It felt like I was meant to be there.”

Transferring with an associate of science degree to UC Berkeley’s College of Letters and Science, Figuera continued his quest for the thrills of education.

After a few semesters, he decided to take a break from school and work in the manufacturing industry.

Servicing televisions as well as radios under the branch of quality control, Figuera soon found a job as a supplier.

“During this time I was the college’s supplier of electronics,” he said. “I would come to deliver equipment and parts.”

It was then that CCC faculty and staff members welcomed Figuera, as many of them would strike up small conversations during his deliveries. Throughout his time as a supplier, this small talk developed into more in-depth, career-related conversations.

“They would tell me about job offerings and the benefits of working at the college,” he said. “It didn’t take me long before accepting the offer.”

Figuera began teaching electronic telecommunications part time in the fall of 1985 and then accepted a full time offer in 1987.

Along the way he returned to Cal, where he completed his bachelor’s degree.

But Figuera would do more than just work on the phones on campus, as he became the sole contributor to laying the framework of communications throughout the CCC campus.

He established the first network system, which is the predecessor to the system the college uses today.

“You guys are lucky with today’s system and connectivity,” he said. “If you were stuck with the earlier one you wouldn’t know what to do. My god, it was clunky.”

In the fall of 1988, CCC began offering an electronics communication program, which he streamlined and spearheaded.

Figuera also installed the network campus telephones ran on and from 1988-95, and  maintained them with the help of his students, working on weekends and at night, all the while teaching during the day.

“The college asked him to do many things over the years,” Chan said, “He’s reinvented himself many times. But the passion and dedication he has for the college and his students never faded.”

Chan said he remembers when Figuera placed the satellite antenna on top of the John and Jean Knox Center for the Performing Arts with the help of his students.

The college was too underfunded for something like an antenna, Chan said. “We didn’t have the capability to receive tele-conferences or communicate with the rest of the evolving community.”

Figuera took matters into his own hands and used his resources to get an antenna up.

Chan said Figuera created an educational moment as he brought his students to the top of that roof for some hands-on experience.

“His students are really going to miss him because he went beyond the classroom,” Chan said.

Figuera’s influence went beyond the classroom and his teaching. He was the first openly gay professor at CCC.

“This was a time when the country was coming out of the AIDS crisis,” Figuera said, “I had people like the CCC president as well as the administration on my side. Everyone was really supportive.”

Figuera become a voice for a community that was struggling to be recognized and accepted on campus.

From 1990-95 he co-advised the BeGladful Club on campus — which stands for “Bi, Gay, Lesbian and Dear Friends United Lovely.”

“We would have discussion groups and forums where students would come and ask questions,” Figuera said. “It was mainly about support and acknowledging the community.”

“These experiences were courageous, but I was also fearful,” he said.

Journalism department Chairperson Paul DeBolt said back in the 80s and 90s faculty had more time to devote to campus life and Figuera made a choice to be completely involved.

“He was always visible on campus — really part of the campus fabric,” he said, “He was always running around, always had projects going and always helping people.”

“His students really loved him, and he had such high standards for them.”

After serving the community for over three decades, Figuera will be retiring at the end of this semester.

But his legacy will continue to be a part of the college.

“I will really miss waking up every morning with lesson plans and course ideas in mind,” he said. “But you can’t go any further with me. I have exhausted our current curriculum.”

“CCC is losing a great asset and the field loses an asset,” he said. “We are losing the opportunity for students to learn from someone who really understands education.”

But for Figuera, the time to go has come.

“I’m looking forward to some time to finally relax,” he said, “It’s been such a life-changing 32 years of growth and opportunity, and I have a lot to cherish as I move on to the next chapter in my life.”