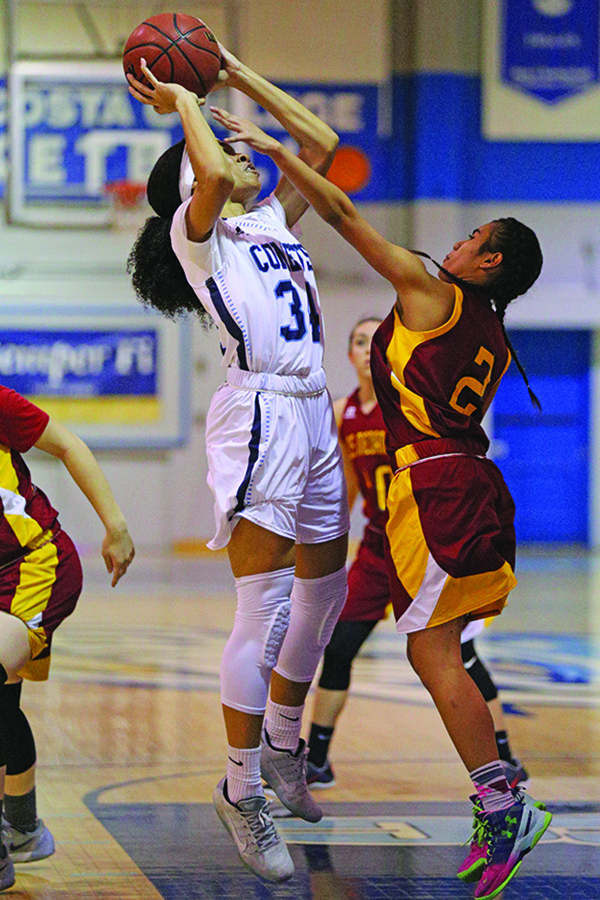 Comet forward Keyauna Harrison goes up for a shot with Mustang guard Margot Vrana's hand in her face during CCC's 64-45 win against Los Medanos College in the Gymnasium on Jan. 27.

The women’s basketball team managed to finish with a 13-13 overall record despite only having five players at the end of the season.

First-year coach Vince Shaw took over a very successful program that had been led by former coach Paul DeBolt.

The team kicked the season off by hosting the annual Comet Classic basketball tournament that draws teams from across the region.

“These tournaments are to prepare us for conference play. This is just a building block that will help us grow,” Shaw said.

They finished fourth in the tournament thanks to a heartbreaking defeat against their rivals from Laney College.

In the game, referees completely missed a few calls in the final seconds of the game that took the Comets out of the contest.

“That was a prime example of community college basketball and the officiating we have to deal with,” Shaw said.

As the season progressed, the team found continuity and managed to win nine out of 13 games. Just as things began to take shape for the Comets, the team failed to field a regulation squad for the final game of the season.

That game was ultimately forfeited which ended the season on bad terms.

The Comets struggled to find a  winning streak in the middle part of the season which actually determined the team’s eventual elimination from playoff contention.

“We missed a lot of opportunities to better our chances at making the playoffs.” guard Dierra Mize said.

“I felt like the team managed to play very well in stretches.”

The team was not necessarily bad, CCC just couldn’t play consistent good basketball throughout the season.

“We provoked many self-inflicting wounds and couldn’t get that consistency that is vital to winning these close ballgames,” Shaw said.

Shaw is now in the process of recruiting players for next season and is leaving the struggles from last season in the past.

“I’m generally good with people once they get here,” Shaw said. “If you’re a good person, with a working attitude, we can make things happen here.”

Guard Victoria Lopez said she met Mize and immediately started bonding, even before the season started, which helped the chemistry that the team shared.

Shaw said that his players are all good people and are committed to the process of improving as a team. He will continue to pursue players that are hard working, good people to raise the percentage of having a successful season.

BVC play ended in disappointing fashion thanks to injuries and off the court issues, but the team is determined to put this past season behind them.

One of the glaring issues with the team is the lack of depth at key positions.

The team has suffered for the last few years because of low participation rates but it has still managed to remain competitive.

Shaw and the team want to improve participation through recruiting and better marketing of the program.