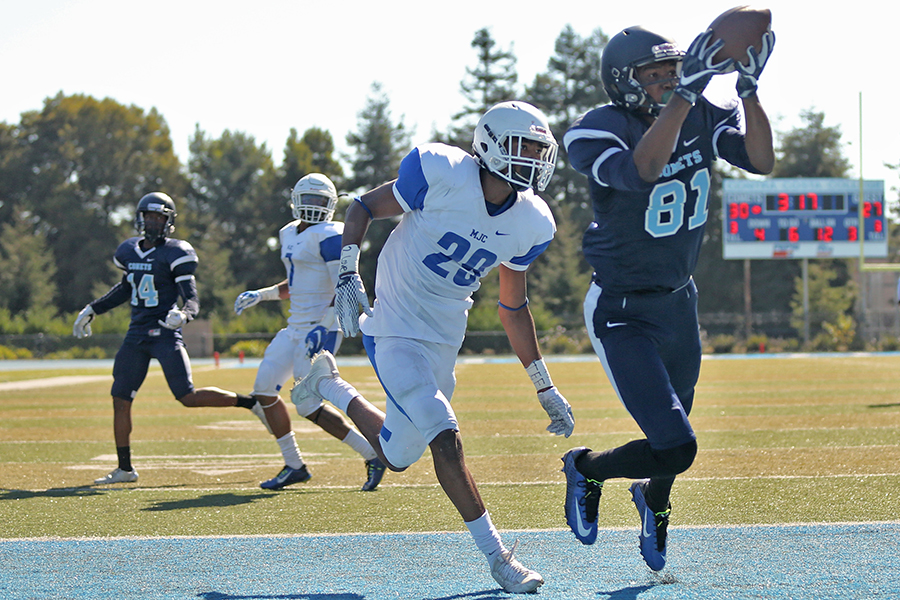 Comet wide receiver Marquis Pippins catches the ball for a touchdown during CCC's 42-34 win against Modesto Junior College at Comet Stadium on Sept. 28.

After living life as a big fish in a small pond, the football team began its 2016 campaign by entering uncharted waters after shifting conferences to one of the toughest in Northern California, the National Bay 6 Conference.

“The best way to sum this season up is as a learning experience,” coach Pat Henderson said. “We were in a new league with better competition. We need to continue to do the things that allow us to compete at a high level.

“Focusing on academics, coaching and the weight room, coupled with utilizing all the resources available on campus, are things we will be doing more of this year.”

Although confidence was high, the Comets (3-7 overall and 2-3 in the Bay 6) got off to a rough start at the onset of the season.

The team was riding the performance of record-setting quarterback Cameron Burston, and believed his athletic acumen and will to win may be enough to carry the team to the level of success to which it had become accustomed.

The Comets lost their first game 55-47 in the final seconds at the College of the Sequoias in 90 degree heat on the road in Visalia.

On their final possession of the game, they drove 46 yards in four plays setting up a final pass into the end zone to win the game.

But in the final second Burston was intercepted attempting a pass to sophomore receiver Tyrone Morgan on the goal line, effectively ending the game.

“It was a brotherhood, even though our final record wasn’t what we wanted it to be,” Morgan said. “Each week we got closer and pushed each other.”

In that COS contest, Burston threw for 345 yards, completed 23 of his 45 pass attempts and notched six touchdowns in the loss.

“This season we grew closer and got better. Some of us have a chance to move on to bigger and better things,” Burston, who signed with Cal State-Fresno, said. “The things that we did positive this year we are going to build on to make the squad better next year.”

The Comets lost their second game by three points and lost another two games this year by a touchdown or less.

The season did offer a handful of high points for the team this year.

After moving to the Bay 6, Comet fans were anxious to play district rival Diablo Valley College in football for the first time in more than five seasons. The game lived up to expectations as at halftime the score was knotted, 7-7.

With Burston having one of his more pedestrian performances, winning the game would be left to the defensive players, specifically, defensive end James Eggleston.

The sophomore totaled eight tackles, half a sack and recovered a blocked extra point attempt for an impromptu 2-point conversion.

On that play, Eggleston scooped up a blocked extra-point attempt and rambled over, around and through would-be defenders before crossing the goal line for the conversion, solidifying a 28-20 Comet victory.

“It was just an average season. We could have done a lot better,” Eggleston said. “The team should continue to improve next season because of the added discipline throughout the program.”