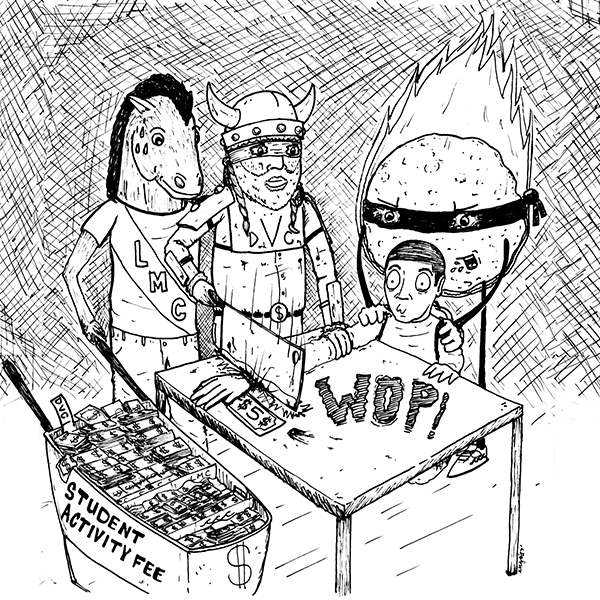 Using student fees to pay any part of an employee’s salary at any public college without the consent of the majority of its student body is a transgression against democracy.

Student Life departments at sister colleges Contra Costa and Diablo Valley are funneling student-generated funds to pay advisers, managers and administrative assistants. But there was no campuswide vote to approve this allocation of student funds at either college.

According to District Account Availability reports, student governments at the three Contra Costa Community College District colleges (Los Medanos College is the other), which operate under the Student Life departments, have extorted $1.1 million from students by way of the $5  Student Activity Fee (SAF) since the Governing Board passed a resolution allowing the fee in 2012.

This $5 fee is charged to each student upon enrollment each spring and fall term. Students can waive the fee by submitting an exemption form to Admissions and Records, but the deadline for doing so is just two weeks into the semester.

Five years after the passing of the districtwide resolution, the Associated Students of DVC (ASDVC) is about to exceed $1 million in its reserve account. That’s one million dollars. According to the ASDVC General meeting minutes, students who paid the fee have contributed $381,935 to fund salaries for their Student Life program manager, student activities coordinator, an office assistant and the student services instructional support coordinator.

And the ASDVC’s annual expenses for paying full-time employees will be increased by $38,981 in 2017-18. Because of annual boosts to employee’s benefits, the cost to students will continue to increase if these ASU boards continue to approve these allocations.

The CCC ASU Board has allocated $34,000 to pay its CCC Student Life coordinator.

To fund these full-time positions at CCC and DVC, it took 83,187 students paying the $5 fee while also paying their $46 per unit tuition fees. Even more damning is the fact that most students only find out about the $5 fee when they can’t add or drop classes unless they pay or have waived the fee.

This resolution was squeezed through the Governing Board because district student unions said they needed money to bolster student activity on campus by funding events, programs or scholarships.

Soon after it was passed, the ASUs districtwide found out how difficult it would be to spend all that money on students.

You can’t pay for everyone’s tuition, campus parking fees, or lunch, but you can allocate student funds to pay percentages of full-time college employees? The audacity of college administrators who approach these groups asking for money to pay the salaries of Student Life employees is appalling.

Even worse is keeping this decision limited to student union boards without involving the student body in campuswide votes.

LMC Student Union President Isreal Castro said, “(Students) don’t know they are paying $5 a semester, and that is a big issue.”

While these administrators make six figure salaries, students absorb the college’s institutional costs without fair representation from their leaders.

Let us vote, or give us our one million dollars back.