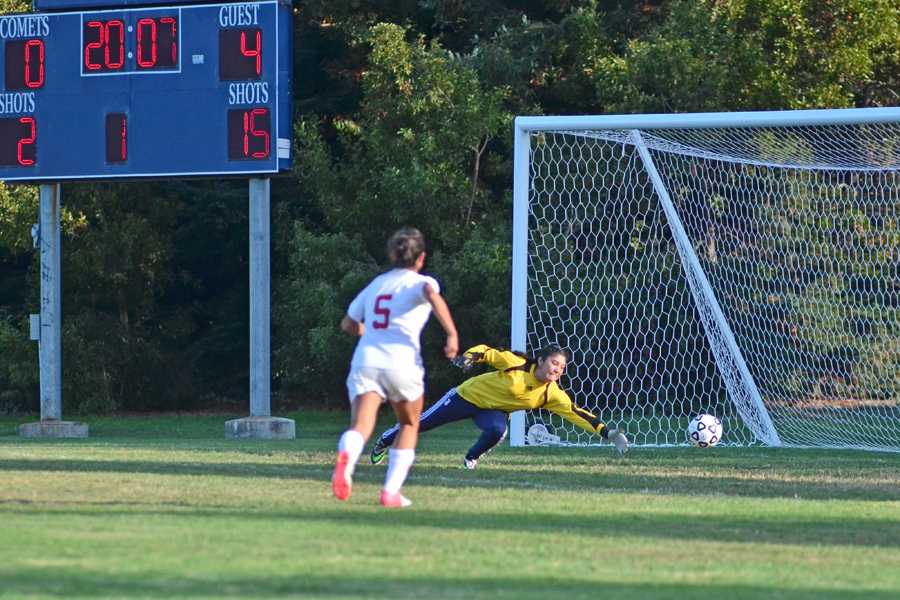 Comet goalkeeper Cristy Garcia (center) leaps to try and make a save during the second half of CCC's 5-0 loss to Bakersfield College at the Soccer Field on Friday.

Three Renegades’ goals in the first 10 minutes of play earned the Comets their fifth loss in a row on Friday at the Soccer Field.

Contra Costa College (0-5) lost its past three games by a 5-0 deficit as complacency plagued the women’s soccer team at the outset of every game played.

The Renegades took complete advantage of the Comets tentative attempts to hold onto possession of the ball early in the frist half and resulted in an early drive up the center field for forward Rosario Rodriguez to score only two minutes into the game.

The first shot eluded a sliding Comet defender Deanna Gonzalez at five minutes and the second developed from a break up the goalie’s right side nine minutes after the opening whistle.

10 minutes into the match, the Comet’s players were finally all present and accounted for but trailing 3-0.

Garcia, however, went on to stop the next seven shots on goal including a rocket of a free kick from the corner of the box on her right side.

“I missed some practice this week, so this morning they had me try some new techniques with the conditioning coach,” Garcia said. “Every game I get a little more confident, I wasn’t used to playing on this level yet.”

Garcia (11 saves) got the ball out from the box better today than she has in any of her best kicks all year.

The CCC defender Marielena Salizar also cleared the ball out of her team’s defensive third repeatedly.

“Everyone should be trying to step it up right now,” Salizar said.

Kicking the ball up the field to give the Comet’s attacking players a better chance to push forward in space without a congested midfield.

Salizar gets the ball out with enough air for her teammates to field the pass and keep moving but The Renegade defense held the Comet’s to only two shots at full time.

The Comet’s coach Amanda Beckenhauer said she does not intend to move Salizar from her defensive position in hopes of creating scoring opportunities.

“When I move her around it throws everything off,” Beckenhauer said. “Last game I had her in goal and it threw off our defensive continuity.”

She said, “(Salizar) has more of a lofty shot so when we do get offensive opportunities we try to get the ball to (Abigail-Perez)—who has more of a line drive kind of ball.” Perez had two shots on goal Friday.

The Comet coach is yet to find a remedy for her team’s lethargic emergence, occurring in every contest this season. “It’s like the first 10 minutes they’re not there,” Beckenhauer said. “Their position is off, they’re not seeing the other players, they’re not thinking – just following the ball.”

CCC has only given up three second half goals this season.

Beckenhauer will alter the pre game warm up drills in attempts to bring the players up to game time intensity.

“We have to come out hard first and not just get physical on counterattacks.” Beckenhauer said.

The Comets continue pre conference play as they prepare to clash against Monterey at the Soccer Field on Monday at 4 p.m.