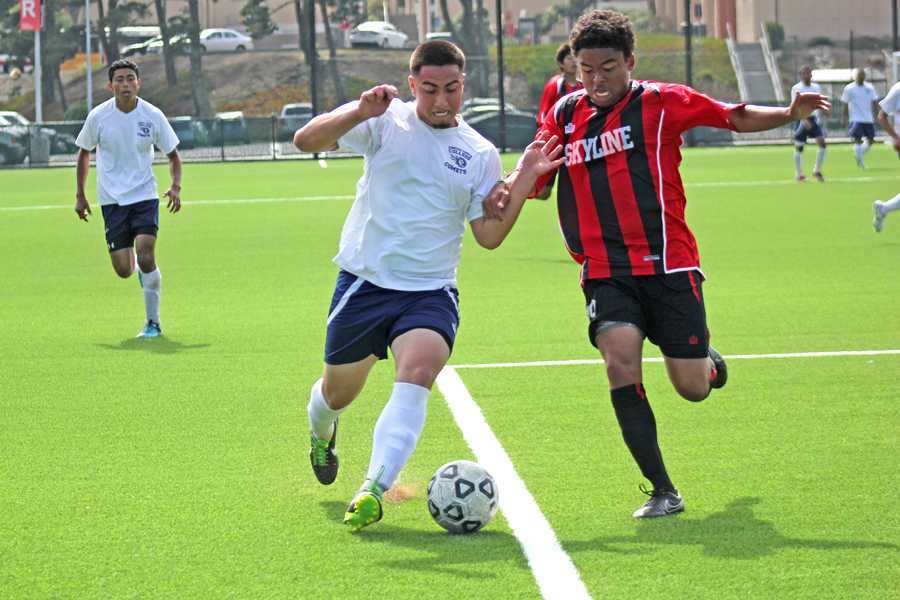 Comet forward Bryan Santos (left) battles to keep possession of the ball against Trojan defender Willem Simpson (left) during the first half of CCC's 2-1 win over Skyline College in San Bruno on Friday.

Blankets of fog buried the field at Skyline College, as the Comets emerged victorious from a final, desperate 15-minute Trojan barrage yesterday at 3 p.m.

Despite ceding a penalty kick at 25 minutes into the second half. The Comet backline held the score at 2-1 as the Trojans’ savage offensive pressure attempted to break the Comet lead.

Skyline coach Daniel Link said, “We got a boost of energy after that (penalty kick) but we couldn’t catch a break.”

By controlling the Trojans’ attacking third and then relying on their four-man wall to defend against the Trojan counter attack, the Comets (2-3-0 overall) managed to end their 3-game losing streak.

Comet starting left wing back Enri Refunjol scored both of the Comets’ goals in only two shots. Refunjol’s shots were struck from within 5 yards of the Skyline goal.

Refunjol scored during the Comets’ first corner kick at 9 minutes.

Rightback Jesus Villagrana delivered the ball into the box,which was deflected by a Trojan defender toward Refunjol, who slotted it in with his left foot.

Comet center back Bradley Alman said the opposing team’s players pressured the Comets’ defensive third more during the second half.

“They started tackling harder later in the game,” he said. “You could tell that (the Trojans) were frustrated.”

Four yellow cards were given to Skyline’s attacking players in the second half and by the full 90 minutes the team had accumulated 17.

At 65 minutes into the game, the Comets held a 2-0 lead until a Trojan midfielder lofted a forward pass into the box which led to a questionable foul.

Center back Bradley Alman had moved behind Ayala into the right side of goal.

Ayala managed to deflect a panicked chip shot by Trojan foward Jorge Avina to send the ball up and backward toward the goal.

Alman leapt upward into the top right corner of the goal to head the ball clear just before it passed the goal line.

The wind caught the ball, spinning it into play only yards away from goal to give Avinas a second chance.

Three Comet players rushed the ball, eclipsing Avina, who went down before he could manage the shot and the whistle was blown.

Alman said “(Avila) just ran into (Refunjol) and fell over, it shouldn’t have been a foul.”

Center official Michael Samaan said either Alman or Refunjol, who had made the run in to assist, pushed Avina.

Samaan admitted post game that he was not quite sure what exactly happened in the box. “I don’t really know what happened,” Samaan said. “I saw someone go down and I just blew the whistle.”

The Comets finished with 14 fouls, none of which were bookings.

CCC will play its final nonconference game against American River College at the Soccer Field on Tuesday.