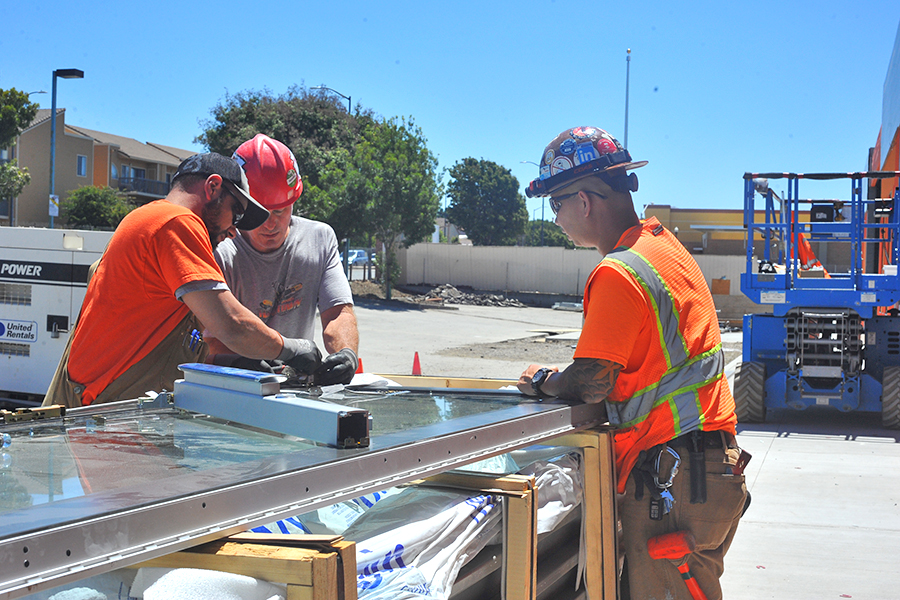 The $8 million construction project continues for the San Pablo Library's new location at the corner of Church Lane and San Pablo Ave on Thursday.

The San Pablo Library is relocating and upgrading to a 22,000 square foot state-of-the art building at the corner of Church Lane and San Pablo Avenue in San Pablo, Calif.

The $8 million project will be Leadership in Energy and Environmental Design (LEED) certified green and incorporate a multifunctional layout set in a modern design with a full service cafe, plaza and bicycle parking.

Assistant to the city manager Charles Ching said the project is being funded solely by the city of San Pablo and is on one of the most prominent corners in the city.

“We want to give San Pablo residents something to be proud of,” Ching said.

A variety of  program spaces will be offered, including a community area, meeting rooms, conference rooms, technology area, adult and teen areas, as well as a children’s collective which will be a space devoted to children and feature a homework center and early childhood learning  material.

For the last 18 years, the Library has been housed in an 8,000 square foot converted retail space at 2300 El Portal Drive.

It has become a gem within the community and has served as a hub for free reliable resources. As well as a staple for young children and families on their way to learning to read.

Ching said the Library will be in one of the busiest locations in Contra Costa County.

“The community values the library and it has become more than just a place to read books.”

Ching said the city really wanted to focus on being cohesive with the modern design of the West County Health Center and the newly constructed Walgreens.

“We wanted to keep with the Spanish flavor San Pablo’s known for,” he said.

“But we wanted to create a space where you can actually hang out and make noise.”

San Pablo Community Library Manager Gia Paolini said everyone is extremely excited about the new Library and all of its added features.

“The community is really growing and the city is working to grow along with it.”

Having been with the Library since 2015, Paolini said there were preliminary plans but pieces just “fall into place.”

“Ideas have come from everyone throughout the library and the city,” she said. “It’s really been a group effort.”

Paolini said she helped pick out colors, art work and other small features for the Library.

With the design being three times larger, she said to help fill up the extra space, the county is donating $200,000 for new books.

Middle College High School student Jovanny Ramos said he can’t wait for the library to open so he can explore all the new genres and technology it will have.

“The library has been useful for what I’m looking for. I can’t wait to visit.”

Ramos said with a bigger space more people will be able to enjoy the library.

Paolini said she is looking forward to presenting the library to the community and introduce everyone to all the new things.

A grand opening is set for mid-August and will include entertainment and activities for the community.

Once open, the library will continue operating on the same seven-day schedule.