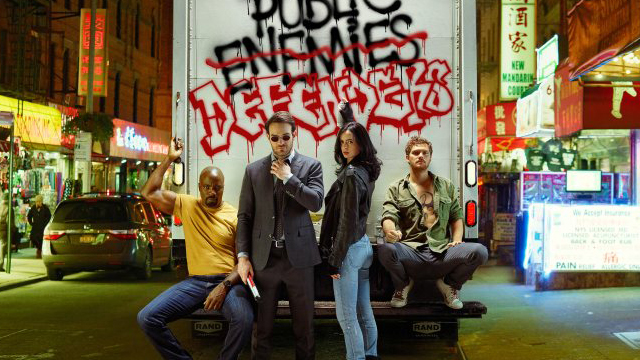 The consummation of Netflix’s Marvel universe is a fun and well developed show with fantastic interaction between its lead characters.

“The Defenders” was released on August 18, 2017 on Netflix. The show is made up of Matt Murdock (Daredevil), Jessica Jones, Luke Cage and Danny Rand (Iron Fist). Following the success of their own individual shows, the heroes have been brought together to defeat the sinister organization known as The Hand.

The show relies heavily on the previous five seasons of the stand-alone series. It is nearly impossible to understand who the secondary characters and villains are if you have not watched the previous shows.

In its first episode, “The Defenders” does a great job of showing you what our beloved heroes have been up to following the end of their own individual series. We see them dealing with their personal demons and the aftermath of the choices they made leading up to the amalgamation of shows.

Daredevil is still the center of the attention as the events in “The Defenders” mainly center on the outcome of his story.

Charlie Cox maintains his outstanding portrayal of Matt Murdock. Cox’s ability to portray a blind hero with a “radar sense” is mesmerizing. The outstanding performance he gives, in this show in particular comes from Matt’s desire to put Daredevil behind him and lead a normal life. This comes from his fear of getting his friends hurt and devotion to the Catholic Church.

Cox’s acting only heightens Murdock’s struggle between his faith and an insatiable urge to beat bad guys into a bloody puddle.

Finn Jones’ portrayal of Danny Rand improved much since his own show “Iron Fist”. The character is much more likeable and fun in this show. This could be linked to the change in producer from “Iron Fist” to “The Defenders”.

The shows leading characters are all as well acted as they are in their own show and the addition of Sigourney Weaver as the leading villain is treat to watch.

Weaver plays the menacing and knifing leader of The Hand disguised an average businesswoman. Even while staring down our heroes she maintains a calm and cool persona. As she delivers her lines her tone is chilling.

Much like Marvels “The Avengers” in 2012 watching the hero’s egos collide is tremendous fun.

Watching the indestructible Luke Cage realize he can be hurt by Danny Rand’s Iron Fists is one of many hilarious moments we experience as these characters come together.

Aside from the funny bickering, watching them fight side-by-side is fantastic.  We watch as the heroes shift tactics and apply their powers in different ways.

The battles are well choreographed and incredibly bloody and the show does not shy away from the violence and gore. Expect everything from bloody faces to severed limbs to appear periodically to add a level of reality the PG rated “Avengers” series fails to offer.

Composer John Paesano who worked on the music for “Daredevil” did a great with the sound track for “The Defenders”. The subtle changes in the music when each character is taking center stage helps bring the vibe of each individual hero into the series.

Since each hero comes from a different neighborhood of New York, the changes in the music are fun and go well with setting the tone for each character. When we see Daredevil in Hell’s Kitchen, we hear music that is much more somber and dark than when Luke Cage is strolling through the streets on Harlem.

“The Defenders” is a fun and amazingly directed show. Netflix set a new bar for them with this series. The short eight-episode series is incredibly enjoyable and leaves the audience wanting more.

Much like “The Avengers” this is a pairing of heroes that fans will love.