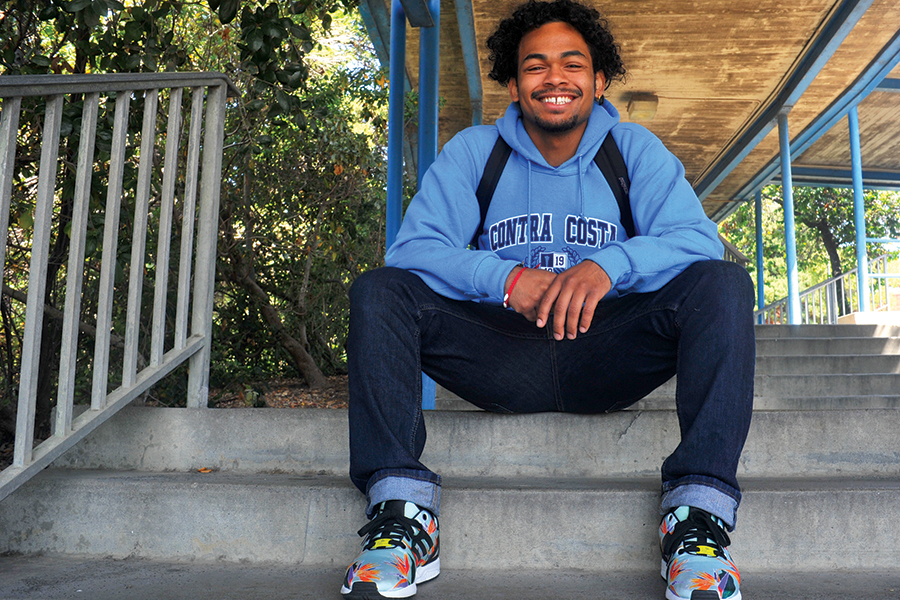 Elijah Morgan takes on the leadership role for the Contra Costa College Black Student Union, serving as president for the fall semester 2017. This will be Morgan's second year as president.

Every now and then, from the cold hard concrete of the urban jungle out grows a rose destined to remind the world that anything is possible no matter which street you come from.

Morgan said he grew up with his mother in the Richmond. He said he spent a bulk of his childhood playing basketball and making friends at the Richmond Police Activities League (PAL). While at PAL he met his two childhood mentors that encouraged him to stay committed to his education and to not fall into the dangerous trap of the streets.

He graduated as a Gaucho from El Cerrito High School. Morgan was an active member in the BSU at his high school, but he said he did stumble into a shared governance position until he enrolled at CCC.

As a freshman he said he was hesitant to take the position, but he said he felt propelled to step up and fill the governing vacancies left by former BSU officials that graduated and moved onto a four-year university.

“When I first got here (at CCC) there wasn’t an active BSU,” Morgan said. “But I knew without a group like (the BSU) African-American students wouldn’t have a voice on campus.

“That pushed me and my friends to re-energize the BSU,” he said.

Born to an African-American father and a Mexican mother, Elijah said growing up he identified mostly as Latino since the family and the culture he was raised by was Mexican.

Both work as advisers to him as the BSU’s co-faculty advisers.

Hodge, who has taught both Morgan and his mother at CCC, said he is a respectable and hard-working young man — although he can have times of demure.

“He works hard around the department and the BSU,” she said. “He does a good job representing the BSU as president.”

Morgan said that being president of a club could become challenging. He said dealing with the behind the scene along with life’s stresses while creating a safe-haven for students who need it on campus is tough, but it is all worthwhile.

“With teachers, classes and deadlines students can easily get lost in the stress of going to college and getting through it,” Morgan said. “It’s tough for all of us.

“We want African-American students to know they don’t have to go through it alone.”

Professor Ampim labeled him as a, “diligent student with good character.”

He said, “(Morgan) is a good guy with a bright future ahead of him.”

Starting his second year in the BSU’s highest role, Morgan said he is working on ideas to help increase the presence of the group on campus.

He said he plans to connect more African-American students with others who may feel alone, need support or anyone who is simply looking for a new group of friends.

Morgan said he thinks it’s critically important to have a club like the BSU on campus because it promotes unity and supports others by promoting a positive representation of African-American excellence in education.

“There are people out there that don’t think we take our education seriously, we want to change that,” Morgan said. “We got folks graduating and transferring to universities.

“We’re really doing good things out here. We just need more of it.”

However, Morgan isn’t only committed to effecting change for the African-American students on campus. He’s involved in invoking change in the local homeless community as well.

He participates regularly in the, “Munchie Movement,” a newly founded Bay Area organization aimed to promote support and good will within the community by providing medical marijuana pre-rolls, food, water and essential hygienic products to homeless people.

The founder of the Munchie Movement, Kevin Del Rosario said that Morgan is persistently working with the organization and always shows a strong sense of selfless service to others.

Del Rosario, who was also a classmate of Morgan, said his dedicated work ethnic shows in every task he does in or outside the classroom.

When he’s not at school Morgan is either at one of his two jobs or is out promoting positivity with messages of love and tolerance in the community.

After CCC he plans on transferring to Morgan State to join its industrial design program.

His career goal is to one day become an automotive engineer.