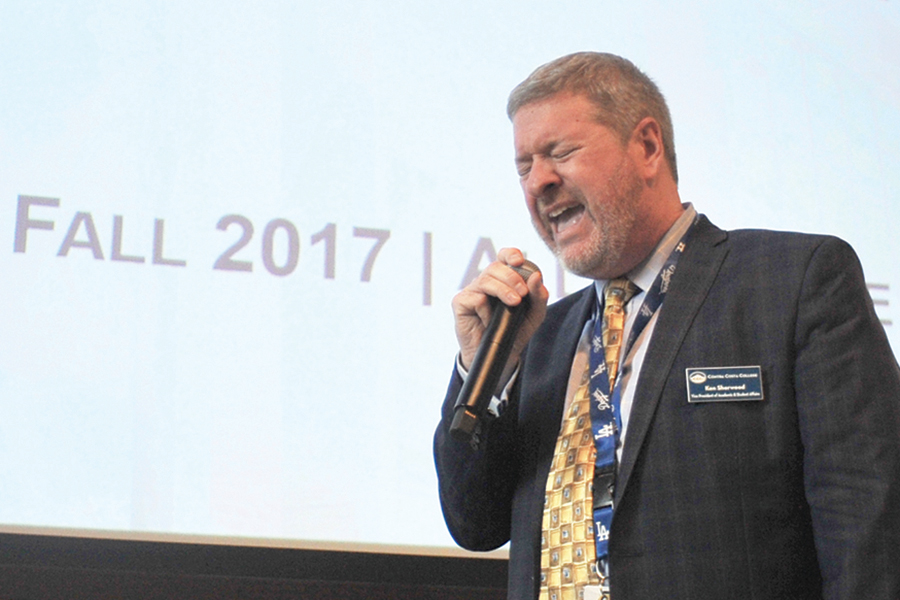 Vice President of Student Affairs Ken Sherwood sings during All College Day in the GE-234 on Aug. 10. Sherwood said he decided to sing for the Contra Costa College staff, administration and student body because that is a way to get to know him.

The decision was finalized in the middle of May and the vice president’s chair in the Student and Administration Building was no longer vacant when Sherwood began his term on June 20.

Sherwood was previously part of the Ventura County College District serving as vice president of academic affairs and student learning at Oxnard College for two years.

“He was an impressive candidate having been in the classroom for so many years and working his way up the career ladder really showed his knowledge as well as his experience of the community college system,” Mehdizadeh said.

Despite the complexities of the community college system, Sherwood’s various leadership roles over the course of his career has made him the “perfect” candidate for the position, Mehdizadeh said.

“He was 100 percent focused on students and his past experience was a perfect fit for what the college needed.”

Mehdizadeh said students are at the center of every decision administrators make and when thinking about college schedules and what classes to cut the question of ‘How will this impact students?’ arises.

Dean of Enrollment Dennis Franco said, “Cuts are painful. They’re hard for students in a class and for faculty in the class.”

Sherwood said cutting a class before it starts allows the student time to enroll in another before the semester starts.

Franco said one of the goals for the academic year that Sherwood will be helping lead is the creation of guided pathways to ensure students receive the help and support they need to make decisions about their majors.

“Ken (Sherwood) is good at helping us see where we need to make those changes in order to help students get through their courses more efficiently,” Franco said.

Franco said the guided pathways help students get from point A to point B on their educational path.

“Ken has a proven record of bringing instruction to student services and really helping one another and work well together. I think it is part of what he brings to the campus.”

Sherwood said before his interview for the vice president position, he walked around campus and felt the energy of the students.

He visited the Library and Learning Resource Skills Center to see how much the college is dedicated to its students and the college Bookstore to see what kind of “swag” they had available to represent college pride and show spirit.

“You can tell a lot about a college by the resources that are available to students,” Sherwood said.

“I got the feeling that students are proud to be here.”

While working at Oxnard College, Sherwood brought the Latino Thought Makers, a celebrity and leadership dialogue series, to bring cultural diversity through comedy about relevant issues.

Sherwood said he wants to bring Latino Thought Makers to CCC to raise community awareness and increase the visibility of community colleges.

“We have to do two things to show we care and support them and thank them for their previous support,” Sherwood said.

Franco said bringing Latino Thought Makers to campus is a strategy that will be helpful for students and for the campus as a whole.

“It ups the profile for the college but it also gives the community and someone that may not normally get access without paying a lot of money to see a concert,” Franco said.

Dean of Student Services Vikki Ferguson said Sherwood keeps students in mind and the way his decisions will impact, help or hinder them and what some of the barriers may be.

Ferguson said high on Sherwood’s priority list is the College Promise Scholarship, a partnership with Richmond Promise that helps qualifying high school graduates into college by assisting them with $750,000 to cover two years of school.

“That is something I put on his radar. We are in the process of developing the program and how we are going to institutionalize it,” Ferguson said.

CCC was one the 14 colleges awarded the two-year grant.

Ferguson said Sherwood has “extensive” experience in the academic area as well as the collaborative efforts he has participated in, whether it was on the instructional side or with student services.

Sherwood said, “I feel lucky that I get to work with so many people that are so good at what they do.”

In addition to his focus on students’ needs, Franco said Sherwood’s ability to relate to employees feels like there is a partnership between them and with the support he gives his staff helping facilitate students’ needs.

Franco said, “It is hard to say what it is, but it is a vibe he puts out like it is going to be OK — It is intangible.”

“He is taking care of us, so we can take care of students.”