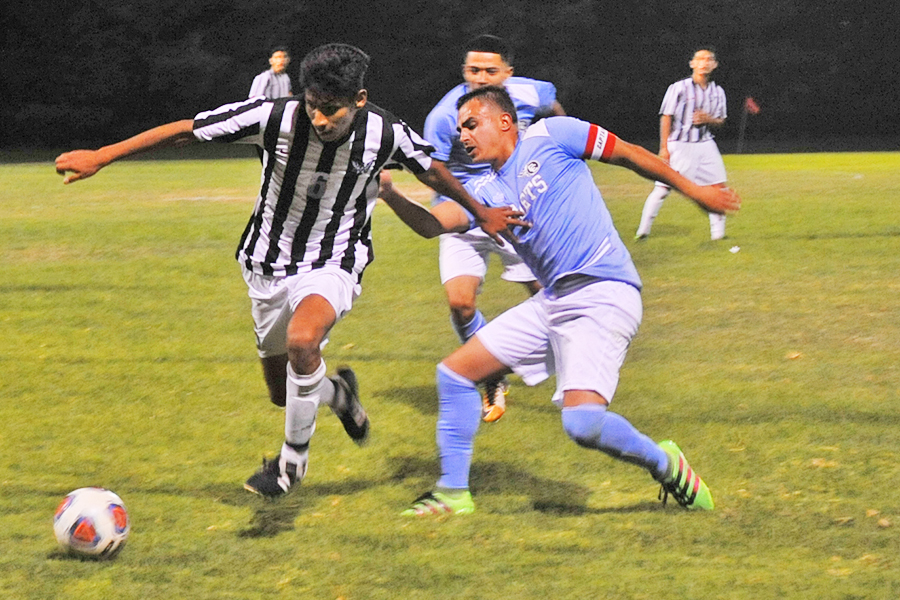 The men’s soccer team (0-0-1) opened its season Friday on the Soccer Field and played to a goalless draw against Evergreen Valley College (0-0-1).

The game was highlighted by a Comet offense that played a fluid, fastpaced game but could not convert some clear opportunities.

“This was a game we should have won. We had a ton of opportunities we weren’t able to put them away. The longer the game went, the more confident the opponents became,” CCC coach Nikki Ferguson said.

Comet forward James Sibrian said, “We missed many opportunities. Some of those misses were unlucky and we have to be able to keep our composure in front of goal.”

The Comets were especially aggressive in the final third of the field during the first half, but having so many numbers up left the team vulnerable in the back.

“We had most of our chances in the last 15, 20 minutes as they pushed on,” Hawks’ coach Simon Cook said. “I’ for sure, think they (the Comets) were the aggressors. They had more shots on goal, and we expected that. We are a fairly new team.”

Cook said that CCC pushed on more than they did but that his team was happy to sit back and go away with the draw and the clean sheet.

The Hawks did sit back for most of the game because of the Comets’ constant pressure and only attacked when they felt comfortable enough to push a quick counter attack.

Ferguson said as the game went on CCC was stretched as a team, which left a lot of open spaces.

Comet midfielder Juvenal Pena said that the team played well in the first half because they were able to keep possession and creating chances up front.

“In the second half we got tired as a team. When a team gets tired the play goes down (in quality), so we were playing wild instead of trying to control the ball,” he said.

In the final 20 minutes of the game the teams traded counter attacks but fatigue played a big factor when the teams were in transition and in front of goal.

“We connected passes and we possessed the ball well and created some chances, but, at the end of the day, we didn’t get the ball in the back of the net,” Ferguson said.

“Coach (Ferguson) has allowed us the freedom on the attacking end to be creative,” Sibrian said. CCC constantly had the wing backs running up the sideline getting involved in the attack, which led to the center backs being left alone at times.

“I think we have to improve in that area (defense), I mean I thought we had our moments when we did OK on that side,” Ferguson said. “We have to do a better job of compacting spaces and picking up players in punts and in the air.”

The Comets lost most of the 50/50 balls in the second half which shows the high physical intensity of the game in the first half.

Ferguson said that the team will have to improve its defense because some of the mistakes it committed during the game against EVC will cost it against more offensive teams.

“We just plan on getting back on the field and keep practicing to improve,” Pena said.

Putting the ball in the back of the net and tightening up the defense will be the focus of the next few training sessions for the team.

Sibrian said that the team has to get at it harder to so they can accomplish what they expect to do on the field next time. CCC will try to continue its 10-game regular season unbeaten streak from last year. The last game the Comets lost in non-postseason play was on Sept. 30, 2016, a 2-1 loss against Mendocino College.

The defending Bay Valley Conference champions tried to get their first goal and victory of the season against San Joaquin Delta College on Tuesday after press time.