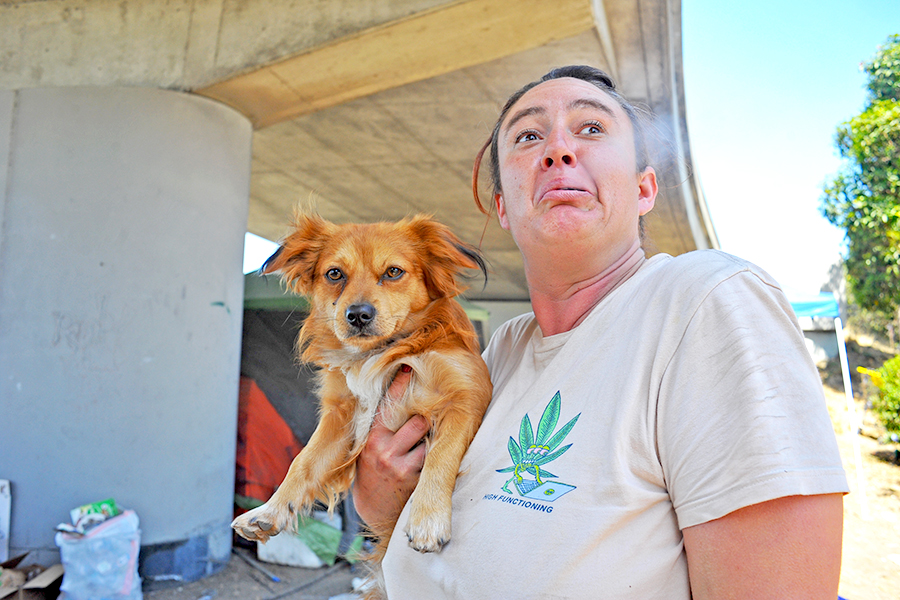 Berkeley resident Rebecca Fisher exhales after smoking a cannabis pre-rolled joint fom the Munchie Movement while holding her dog under the University Avenue exit in Berkeley on Friday.

Within society there are stigmas attached to the misconception of the daily lives of the homeless community.

From the subconscious judgment created when faced with a plea scribbled on an old piece of cardboard, to the disconnected notion of erect tent cities scattered along the sides of freeway exits.

But for two Contra Costa College students, their disposition toward the homeless goes beyond that of stigmatic judgment and into acts that provide healing for a despondent community which seems to be sliding deeper into the shadows.

“We started in the spring semester and would go out after class and feed the homeless,” Domine said as he placed a piece of yellow cheese between two pieces of white bread and squeezed it between five other sandwiches on the grill.

Domine said the cannabis pre-rolls come secondary to the food and water they hand out.

“The marijuana helps the homeless with insomnia and post-traumatic stress disorder (PTSD) from sleeping outside under harsh conditions,” Domine said.

“It’s really about feeding these people. That comes first. As long as we keep feeding, the cannabis isn’t important.”

The idea for the movement was conceived during a CCC statistics class with professor John Hsu.

Both Del Rosario and Domine had experience volunteering for the homeless in the past and their energies met with a like-minded thought.

“We want to address issues with our government when it comes to homelessness,” Del Rosario said, while sorting out fruit and chips into separate boxes.

“With the cost of living going up, anyone could be homeless. We want to get millennials involved,” Del Rosario said.

So far Munchie Movement volunteers have gone out over 30 times, as they try to go out every week to serve homeless communities.

They have served homeless communities on Fish Street in San Francisco, People’s Park in Berkeley,  and the “tent town” under the University Avenue bridge exit in Berkeley, where they will be heading for their next mission.

Del Rosario said, “Within the five to six months the Munchie Movement has gone out, we have given (away) 374 sandwiches, 434 water bottles and 162 pre-rolls.”

The movement also provides dog food and treats for pets of the homeless.

“Many of these people have dogs and refuse to leave them for a shelter. They would much rather sleep with their dogs outside,” Del Rosario said.

As of now, everything is bought between Del Rosario and Domine, but work is being done in hopes of becoming a non-profit and receiving donations.

“We were blessed to be (given) four boxes of chips and bread from the Emeryville Citizen Assistant Program,” Del Rosario said.  “Once we file the 503 1C and become a nonprofit we will have larger feeds with better food.”

With everything packed and ready to go, the Munchie Movement members head out to the University Avenue bridge exit where a community of homeless live under the bustling Interstate 80 freeway.

Before entering the dirt and dust of the tent community, Domine announces the Munchie Movement’s presence.

“We have food and water,” Domine says as tent doors slowly slide open and heads and arms poke out into the sunshine.

“It was $7 for four loaves of bread and cheese,” Domine said while handing out the foil wrapped sandwiches to those who trust enough to accept. “The giving part is different when you see these people out here starving.”

Anyone could go out and do it, he says. “It’s a service to our brothers and sisters.”

Thirty-four-year-old Josh “Tater-Tot” Doherty’s tent sits in the middle of what seems like a desert of empty food containers, old kitchen appliances and boxes of clothes.

“Door-to-door magazine sales brought me out here from Texas eight years ago,” he says. “I stay out here because I don’t want to be miserable and live a life that society wants me to.”

Doherty says there aren’t requirements to his life and the freedoms are what make him most happy.

“It’s awesome that they (Munchie Movement) come out and brought all this stuff, man,” Doherty says as he takes the final puff of his pre-roll. “Normally I sit here with my sign that says ‘Mama tried’.”

As Munchie Movement volunteers continue farther under the bridge, the homeless community seems to be warming up to its visitors.

“Sometimes it’s by choice that they live this way,” Del Rosario says while he carries the box of apples and pears to the next set of tents.

“They want to live off the grid and away from society,” he says. “It really gives you a different perspective on life.”

Once the volunteers get into the center of the tent community, the energy and gratitude can be felt among all who have made the University Avenue bridge exit their home.

Fiona Rothschild, who has been on the streets since she was 14, is now 64 years old and has moved from city-to-city around the Bay Area.

When she spots the group of volunteers, she almost stumbles as she sprints toward the grilled cheese sandwiches and water.

“It feels wonderful because I haven’t eaten in two days,” she says. “With having this food, it means I don’t have to starve.”

As the afternoon sun begins to slip lower into the sky, those who have already received a sandwich and pre-roll are coming back for seconds.

“When they ask for seconds for their friends or significant others, I know that chances are it’s for them,” Del Rosario said. “But for the most part we give them another sandwich or water because we don’t want to pass judgments”

Former Crockett resident Tina Carlson, 51, says it’s refreshing to be thought about and not just pointed at and called names. “It’s a surprise, but it feels amazing to know that people actually care about us,” she says as she and her dog Buddy greet members of the Munchie Movement.

“Over the years I’ve worked at trying to get back on my feet and find a job, but with not having a permanent place to shower and sleep, it gets very difficult,” Carlson says.

Carlson, who seems more than thankful, has tears forming in her eyes. “I just can’t leave my dog I’ve had for over three years to go to one of these shelters,” she says. “If anything, I will go out with my sign and make about $20 to $25.”

Taking the last couple of sandwiches and waters, the Munchie Movement volunteers head up the hill to hand them out at Berkeley’s People’s Park near UC Berkeley.

“The hardest part is when we run out food,” Del Rosario says. “We don’t have enough for everyone.”