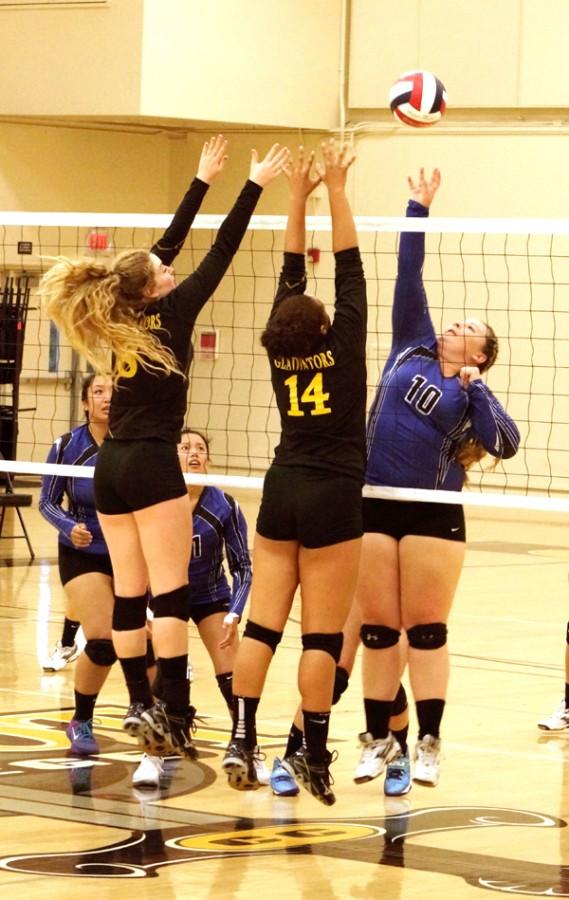 Comet outside hitter Kailey Walker (right) attempts to loft the ball over the net toward Gladiator players Krissa Marie San Juan (left) and Mary Newman (middle) during CCC's loss to Chabot College in Hayward on Sept. 10.

HAYWARD — The Chabot College volleyball team used size to sweep the Comets during its match Sept. 10 at Chabot.

The Contra Costa College (2-3 overall) volleyball team’s six-player roster left it without any reserves for substitutions.

CCC setter Richelle Ledesma said, “It was hard without Valeria. She is our main middle player.”
Without Valeria Avilla, who was out with an injury, coach Zachary Shrieve was forced to play some of the Comet players out of their normal positions.

“We were out of position and we lacked in height,” Shrieve said.
The second set looked like it would have a different showing from the Comets, with them managing to hang with the much larger Gladiators for the first minutes, but CCC failed to maintain their intensity, allowing the Gladiators to end the set 25-13.

The Comets turned into a more defensive team during the third set.

CCC moved in a flurry around the court, diving and doing what they could to keep the ball in play, and scoring opportunities alive. This effort fell short, however, and the Gladiators finished the Comets in the second set 25-16.

Chabot used their much larger roster during the first set.

The Gladiators were able and willing to rotate players in and out of the game. This tactic allowed their squad to remain fresh and energized, while the Comets’ energy was drained away.

Fresh players and a full team allowed the Gladiators to close the set 25-7.

Ledesma ended the game with 10 assists and three digs.

The Comets next game will be against Yuba College Friday in the Gymnasium at 6 p.m.