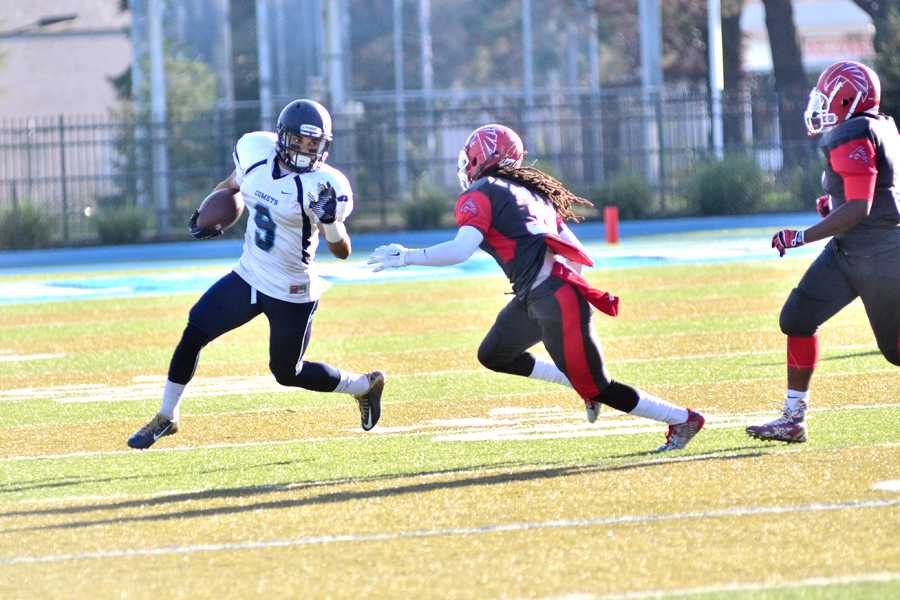 The Comets struggled to contest the offense of West Hills College-Coalinga (2-0) during a 50-21 loss at Comet Stadium on Saturday.

Contra Costa College (1-1) elected to kick after winning the coin toss. The defense promptly got the ball back for starting quarterback Emmanuell Williams and the Comet offense. Williams took advantage of the early opportunity by completing a beautiful 34-yard touchdown pass to Malcolm Hale up the left side of the field.

The Falcons, led by quarterback Freddy Taliulu marched up the field on a drive accented by two long WHCC runs. Culminating the drive was a 3-yard touchdown pass to receiver Anthony Mahoungo. A failed extra point left the score at 7-6.

The visiting team scored seven more times before CCC would tally any points on its side of the ledger.
Trailing in the fourth quarter, however, did not hinder the Comet’s tenacity.
“That was the best hole they opened up all game,” Arodin said. “When I saw it I just wanted to hit it hard and get through.”

CCC led 7-6 after the first quarter. The Comet defensive front got good penetration, stalling a number of Falcon drives and giving the offense a number of opportunities to develop a consistent rhythm.
Football coach Alonzo Carter said, “Offensively we were not in sync (to establish) drives or get ourselves in position to allow the defense to take a breath.”

Lacking consistency and continuity on offense, the Comets mustered only 100 yards rushing on the day and 209 yards passing.

Added to this were two touchdown passes from Taliulu, and a 19-yard touchdown run by Tyron Jones. An additional Falcon field goal sent the Comets into the half trailing 36-7.

At the start of the second half, the Falcons recovered a 12-yard squib kick and quickly capitalizing on excellent field position with a 23-yard touchdown pass.

Another bright spot for the Comets was decent play by Carter’s quarterback carousel.

Freshman quarterback Jonathan Banks showed poise when leading the Comet offense. He completed six passes for 83 yards and one late game touchdown. Banks also scampered for 53 yards on four carries, leading the team in rushing for the game.