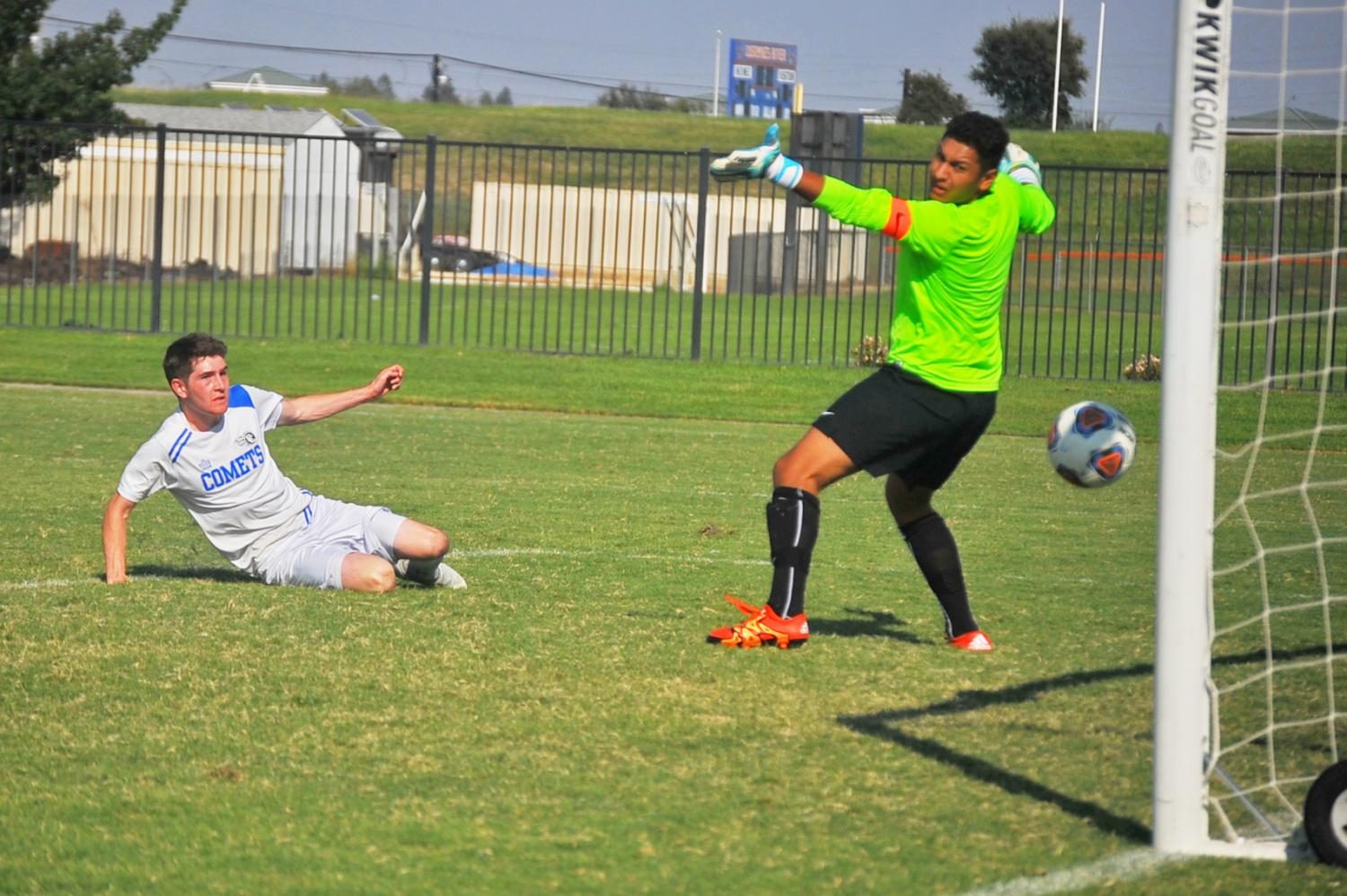 Under the sweltering Sacramento sun, the men’s soccer team (0-4-2) lost to Fresno City College (3-1-2) in by a score of 6-2 at Cosumnes River College on Sunday.

The Comets gave up an early goal to the Rams forward Johnny Rodriguez, who eventually scored a hat-trick, showing the Ram’s ability to score goals on the counter attack.

“I thought we had a good first half, we gave up a soft goal early but we found a way to get back into the game,” Comets men’s soccer coach Nikki Ferguson said.

Comet forward Anthony Maytum scored a cracking volley far post while sliding on the ground on an assist by Comet defender Raul Garcia.

“In the first half I thought we played well,” Garcia said. “We were making runs, doing things that we had to do.”

Ferguson said Fresno’s halftime lead made him rotate players and some of it had to do with injuries.

“The team was not playing as consistently as (it did) the first half,” he said. “When you make mistakes a team like Fresno will make you pay.”

The Rams scored on quick counter at minute 50. Two minutes later they capitalized on a Comet defensive error which put FCC up 4-1, sealing the victory for them.

“This game was in question to some degree for us,” Fresno coach Eric Solberg said. “They (The Comets) basically just gave us the third and fourth goal. That pretty much put the game away.”

A miscommunication between the backline and goalkeeper at these crucial moments in the game deflated CCC’s confidence to move up the field.

Solberg said that the Comets midfield seemed thin and unable to play in the hot weather late in the game.

“We practice in that weather every day,” he said.

Ferguson said his team was unbalanced in the midfield.

The Comet midfielders were caught either too far left or right, this left a gaping hole in the middle of the field for the Rams to exploit.

“We were creating a lot of opportunities in the first half,” Garcia said. “In the second half, we didn’t create any opportunities. We weren’t sending effective balls through (to the forwards).

“We could have put away this game earlier on, but we didn’t convert those opportunities in the first half.”

The Comets have been outscored 22-6 in the last four meetings between the teams under Ferguson’s tenure.

But in these four meetings, Ferguson’s team has held its own in the first half.

Games against teams outside of the Bay Valley Conference gives the Comets a higher Ranking Power Index (RPI) for the playoffs.

CCC plays against Las Positas College on Tuesday after press time, and then it plays Butte College at 4 p.m. on the Soccer Field.