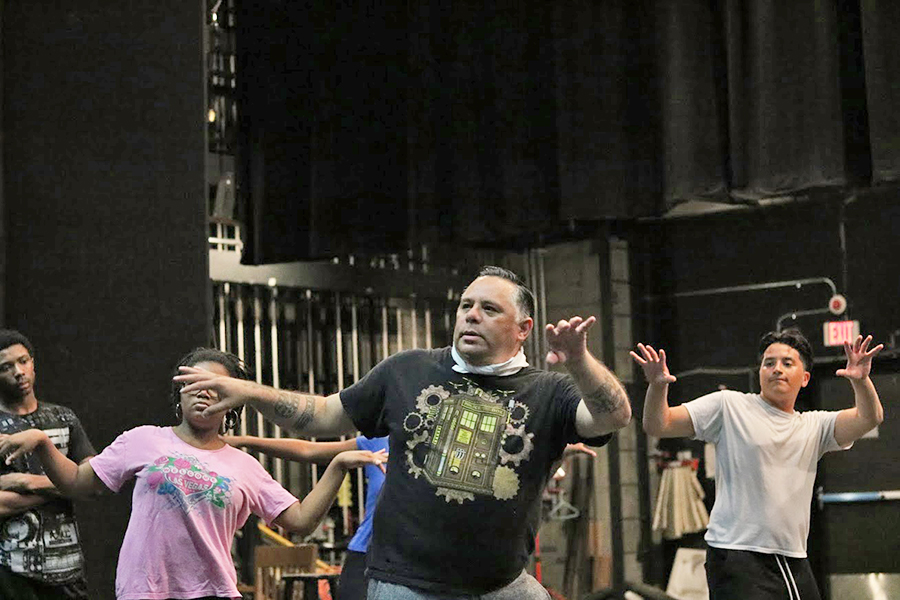 Drama department Chairperson Carlos-Manuel Chavarria teaches the cast steps to a dance number at a “Zombie Town” rehearsal on Sept. 13.

A comedic journey chronicling a theater troupe’s experience in a town torn by a zombie apocalypse opens up the drama department’s 2017-18 theater season.

“Zombie Town,” directed by Tara Blau and written by Tim Bauer, opens Oct. 13 at 7:30 p.m. in the John and Jean Knox Center for the Performing Arts.

Tickets are $15 general admission and $10 for students.

The production serves as a play within a play. Set in the 70s, it is about a theater collective visiting a minuscule town in Texas, Harwood, with a population of 112. In the play, survivors of a zombie apocalypse are interviewed.

The collective has plans of re-telling the apocalyptic tale of the city by acting out information gathered from the surviving citizens.

Blau said she was “a little terrified” about the prospect of performing in such an active adaptation.

In its original form, the play is a satire of documentary productions. Blau said the “mockumentary” riffs on documentary plays like “The Laramie Project.”

Traditionally, documentary plays are done on serious topics, such as “Twilight: Los Angeles 1992,” a play about the LA riots. “Zombie Town” takes the idea and flips it on its head by documenting a farcical zombie apocalypse.

Each actor performs various characters over the duration of the play. The dialogue often comes in the form of individual monologues.

Sophomore forensic pathology major Kamaria McKinney plays “Actor #3.” She said she didn’t have prior knowledge of “Zombie Town” when auditioning. She said she was surprised by how funny the play is.

McKinney said the characters she plays are polar opposites, ranging from a tavern owner to a peppy local student.

“It’s getting easier, but it is a challenge to remember that each character has its own motivations and thoughts,” McKinney said.

McKinney said her favorite character is Didi Drago, a student in the town. “Didi is a character with a lot of quippy one-liners and a really cute sense of humor,” McKinney said.

Blau said in her previous directorial efforts, including “Two Sisters and a Piano,” the cast was more self-contained and smaller in scope. “Zombie Town” is full of cast members as zombies and includes a dance element.

Sophomore drama major Diego Loza plays “Actor #2,” a role that has him performing as five different characters, including the mayor of Harwood and a gravedigger.

Loza said the play is goofy and similar to the comedy of the old TV sit-com “The Beverly Hillbillies,” but in an apocalyptic world.

McKinney played Gilmer in the spring musical “Godspell.” She said acting in “Godspell” was a different kind of comedy because it is more absurd and fantastical.

She said the comedy in “Zombie Town” has characters acting absurd in apparently real situations.

“It’s the perfect time to do a zombie-themed play with Halloween coming up,” Blau said.

Cast member Mark Shepard said it has been a while since he actually performed in a play.

“I was so impressed with the theater department, the theater, the space and how everything is run. It is one of the reasons I came to audition,” Shepard said.