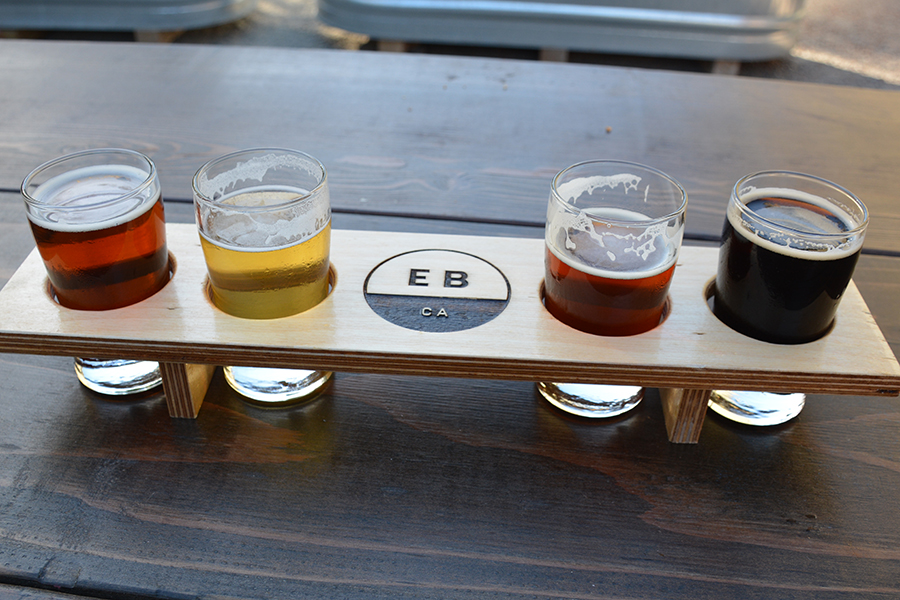 POINT RICHMOND — Tucked away in an industrial warehouse in Point Richmond, East Brother Beer Company Brewery provides a modernized casual ambiance that creates a friendly environment centered around beer that’s welcoming to all people, even minors and pets.

Hidden on the backside of a quiet industrial depot located at 1001 Canal Blvd., East Brother sits at the bottom of a gorgeous hilly range which produces a calm and serene atmosphere that is ideal for meeting new people.

Wanting to try everything they had to offer, I decided to order the “flight of four” which are four 4 ounce tasters each filled with a different beer. It’s not a bad choice for eight bucks.

I tried four of the five beers offered: Red Lager, Bo Pilsner, Red IPA and Oatmeal Stout. (The wheat IPA had run out prior to my visit.)

Besides visiting the taproom for a sample, East Brother beer can also be found at select bars and stores throughout the Bay Area.

However, I was impressed with the welcoming and sociable crowd that East Brother attracts within its doors. Everyone seemed to be there for the same reason — to drink good beer around good company. After only minutes of being there, I found myself chatting with kind-faced strangers over delicious brews as my feelings of anxiety from being a novice beer drinker fluidly poured away — like an on-tap beer filling a mug.

East Brother Beer Company promotes a different vibe than the usual “watering hole” people have grown accustomed to in the Bay Area.

Contrary to the typical bar scene of wall-to-wall television screens and long lines for insufficient pool tables, East Brother boasts only one television, which seemed to be secluded on the corner wall as if it’s designated to be a last resort for entertainment.

The brewery offers alternatives to the brain-numbing entertainment of television and instead actually requires patrons to socialize with others in activities such as bocce, corn hole and ping pong.

Group games like dominoes, chess and traditional playing and Uno cards can be requested from the counter as well.

Food trucks line up outside of the taproom daily since the brewery doesn’t sell food, only snacks such as nuts and chips.

Expect the food trucks to vary depending on the day and time you visit. A Mexican taqueria truck supplied the food while I was visiting.

Also, if the nuts or the food trucks are not pleasing to your palate, the taproom allows customers to bring in outside food.

Although East Brother doesn’t currently sell kegs to the public, it does sell promotional merchandise like hats and gift cards on the spot and on its website.

Tours are currently not offered to the public, but the brew house and cellar are all viewable from the taproom.

Taproom hours are Wednesday-Thursday 4-8 p.m. and Friday from 4-9 p.m. On the weekends, it opens at noon.

On Sept. 27 East Brother will be partnering with Richmond Promise to host the “Cheers for the Promise” event which will take place from 4-8 p.m. as a community celebration and local teacher appreciation night.

Contra Costa College President Mojdeh Mehdizadeh will be one of the guest bartenders for the event alongside others, including Richmond Mayor Tom Butt.