Constitution Day offers insight on past 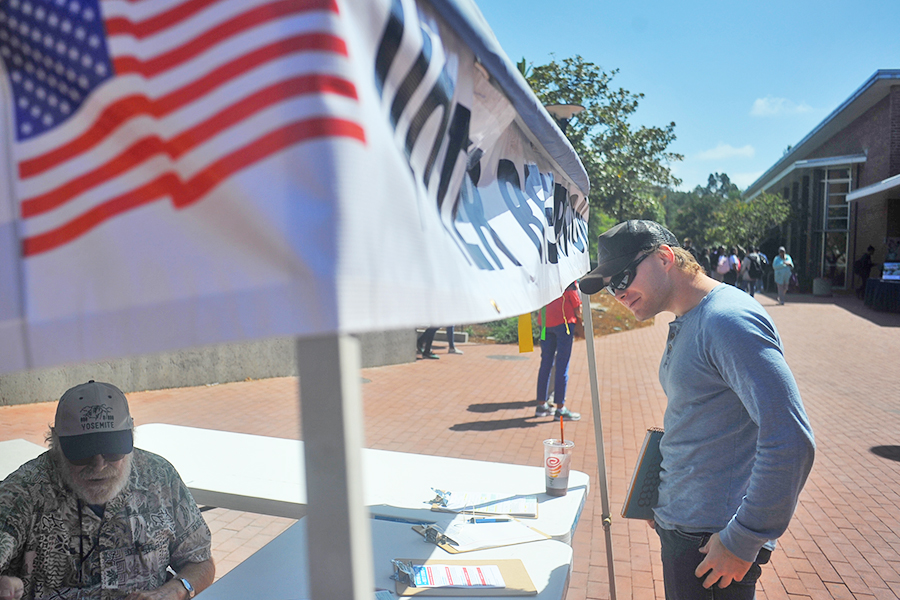 Criminal justice major Ben Hayunga peeks into one of the many voter registration booths stationed around the campus during the Constitution Day event held in the Campus Center Plaza on Friday.

Constitution Day was celebrated with an amendment scavenger hunt at Contra Costa College Friday to mark the signing of the U.S. Constitution over 200 years ago.

The Associated Students Union and the Financial Aid Office set up posters of the first through the eighth amendments on buildings surrounding the Campus Center Plaza. Students who visited each of the posted amendments and marked it down on their scavenger map earned a free hot dog or slice of pizza for lunch.

Copies of the Constitution were available for free in English and Spanish along with a book about the Declaration of Independence.

“This is a time where we try to teach students about our history and to understand their rights and how this country was built,” Dean of Student Services Vicki Ferguson said. “This is a day to understand how to build our country.”

The Bill of Rights, the first 10 amendments to the U.S. Constitution, were added two years after the signing of the original articles as a means for the states to check the powers of the federal government.

When asked to comment, many students spoke about the First and Second amendments. “If people felt like they could not choose their own way they would not be happy,” said undecided Kalynne Williams.

“(The First Amendment) helps the world to be more diverse in character and gives us freedom to be who we want to be,” said student May Souvandara.

“People should not be allowed to keep guns because it results in more violence,” said CCC student Roshedy Rabides. Another CCC student, Jessica Godinez said “I don’t think people should have guns because if they get into an argument they will want to take things into their own hands.”

Constitution Day is also known as Citizenship Day and some students commented on Dreamers and their relationship to the U.S. Constitution.

“This could be a way for citizens to help non-citizens because you have to know about the U.S. Constitution to become naturalized,” said political science major Chris Miller.

“The constitution might affect other people but it does not really affect me as a student. Authorities state that we have these rights but are they really enforced? It can really affect DACA students though, they have to fear for their education or their life,” said CCC student Christian Martinez. “I was thankful to see an email from counseling that the school is giving out DACA renewals.”

In 2004 congress passed a spending bill that requires that all institutions of higher learning receiving federal funds to observe constitution day and provide a corresponding educational program.

The U.S. Constitution is the most influential legal document ever created according to the pamphlet that was passed out for free. The document was signed on Sept. 17, 1787 by zero women, zero black people, and zero Native Americans in Philadelphia, Pennsylvania.

The film traces the freeing of African-American slaves by the 13th Amendment to the modern-day slavery of the prison industrial complex.