Laughs from the horse’s mouth 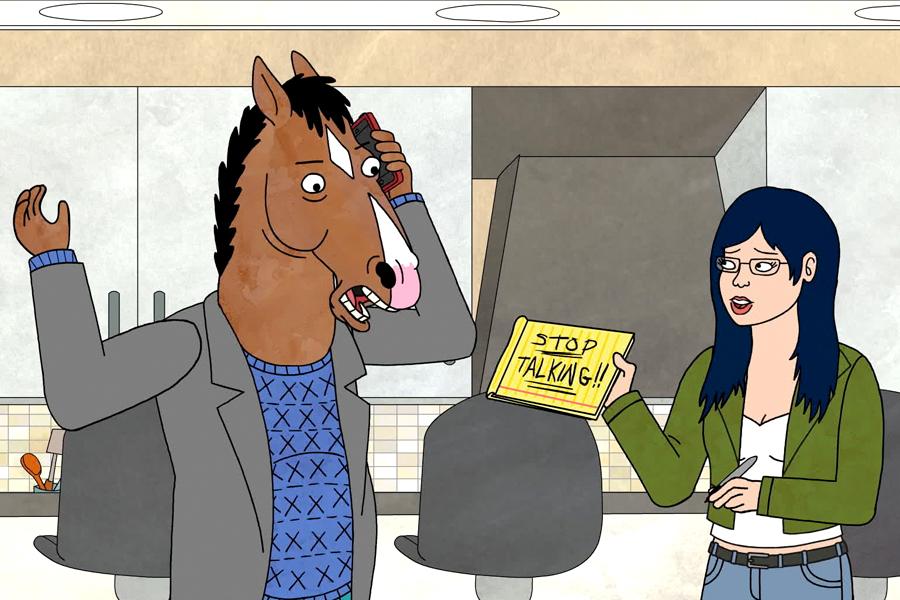 The newest addition to Netflix’s repertoire of original series is a smashing success.

“BoJack Horseman” is about its title character, BoJack Horseman (Will Arnett), a self-obsessed and horribly depressed horse that was the star of a famous ’90s sitcom “Horsin’ Around.”

BoJack himself is a bitingly witty horseman who is incredibly smart. BoJack has strong principles but little in the way of a moral code. He lives mostly alone, except for his friend Todd (Aaron Paul), who crashed one of BoJack’s parties years before and never left.

Other characters that color BoJack’s life are his girlfriend Princess Carolyn, a purple cat that works as a talent agent, and Mr. Peanutbutter, another former sitcom star, whose show blatantly ripped-off BoJack. Finally, there is Dianne Nguyen, the Boston born author that is ghost-writing BoJack’s memoirs.

Netflix released the show in its entirety, as is its model, and viewers can watch all 12 episodes right now.

The show is a surprising cartoon. “BoJack Horseman” is a comedy, and there are plenty of laughs to be had, but viewers will quickly find themselves growing oddly attached to the animated people, animals and animal-people.

At face value, it is a cartoon about a horse, but after a few episodes it becomes painfully obvious the show’s main focus is depression. The show is filled with deeply moving moments that breathe a sense of life into the characters.

Whether it be BoJack driving silently home after an intense confrontation with someone that use to be a friend, or Princess Carolyn gazing out of her work window as her phone wishes her a happy birthday — “BoJack Horseman” finds a way to ride its audience until they find themselves wishing the second season was here.

The comedy in the show comes from BoJack’s sardonic wit, the show’s less than tongue-in-cheek mocking of the entertainment industry and from the fact that many of the characters are animals.

It is hard not to find it funny that the feline Princess Carolyn hates being called “Catty,” or that BoJack feels the need to stress that he is not stubborn, he’s a horse.

The comedy stands in balance to the deeper moments. Many of the laughs in the show are just silly, like Mr. Peanutbutter, the dog, harboring a distrust of mailmen that borders on insanity, or losing his mind when someone knocks on the door.

The comedy is often mature as well, such as BoJack finding more sexual release from watching the old episodes of his show instead of the woman who shares his bed.

Twenty years after his show ended, BoJack has fallen far from grace. He has had no work since the conclusion of his “Full House” style sitcom, and spends the majority of his days in a drunken or coked-out daze.

In an effort to revitalize his career, the agents in BoJack’s life have pushed for him to write his memoirs, as anyone who spends their time in such self-destructive ways must have an interesting life. BoJack quickly learns he has no business writing a book, and soon hires ghostwriter Nguyen.

The plot flows from there, and each episode of the season feels like the natural progression of the one before it. Unlike most cartoons, BoJack is not episodic — the story is told throughout the season. The story is engaging and rich with character development. The viewer will realize toward the end of the season that these are simply not the same characters from episode one.

Netflix spares no expense on “BoJack Horseman.” The show is littered with guest appearances from television, Hollywood and even Broadway stars.Stephen Colbert (“The Colbert Report”), Kristin Chenoweth (“Wicked”), Olivia Wilde (“House”) and even Ken Jeong (“The Hangover”) all lend their voices to characters in “BoJack Horseman,” some for only a single episode.

The show is funny and deeply engaging. It is hard to ask for more than that from an animated comedy about a horse. “BoJack Horseman” is worth watching.