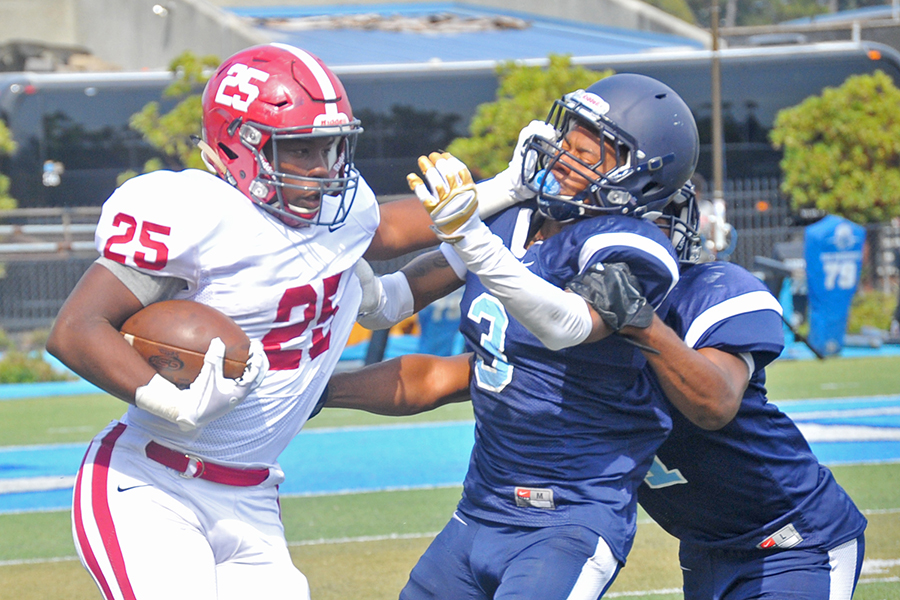 The football team lost its third game in as many tries despite scoring more points than in its previous two games combined, this loss a 56-28 drubbing against Sierra College Saturday at Comet Stadium.

The Wolverines (1-2) scored early and often in the game, and despite the Comets (0-3) second half scoring surge, Sierra maintained its offensive tempo and never let Contra Costa College claw back into contention.

“Today is a clear example of what happens if we don’t do our jobs,” coach Pat Henderson said, reiterating a message that he had been preaching to his team all week.

The game had an ominous feel to it, palpable before kickoff or even before the national anthem.

Since a football team is made up of roughly 50 players, it means lineman, special teams and skill positions all come out separately in timed intervals for pre-game preparations.

That continuity was lost for the largely freshman team because, prior to the game and throughout regulation play, the play clock and scoreboard was completely inoperable.

Luckily, CCC will play Modesto Junior College Saturday at 6 p.m. in Modesto. The Comets hope the scoreboard is repaired before the next home game.

The Comets seemed disjointed from the start of the game and that sentiment became a reality on the first play from scrimmage.

On a simple 2-yard swing pass, Sierra running back Draysea Hudson shimmied past CCC defenders, shifted gears and dashed up the Comet sideline for a 68-yard touchdown.

As each team settled down, defense became paramount and both teams were forced to punt on each of its following two possessions.

The game descended into a defensive stalemate until, with five minutes to play in the first quarter, Sierra gashed the Comets up the middle for its second touchdown of the game.

The score gave the Wolverines an early 14-0 advantage.

Sophomore receiver Semaj Mitchell (three catches for 75 yards and one touchdown) was productive for the Comets in the loss. At 16-yards-per catch, he is currently slotted at sixth in the National Bay 6 Conference in yards-per-catch.

“I feel like we’ve been saying all year that we need to get the ball to our playmakers in open space. Just get the ball out fast and trust us,” Mitchell said. “

Being down 14-0 so quickly caused some of the younger Comets to lose their composure. They began to hunt for the big play, or overthink simple situations, which only exasperated an already critical situation.

These types of mistakes would lead to multiple quick-strike scores for Sierra. Six of the eight scoring drives the Comets yielded were of three plays or fewer.

Sierra would score three unanswered touchdowns in the second quarter giving the team a 35-0 lead at halftime.

After the break, Comet quarterback Davin Lemon-Rodriguez (9 of 20 for 117 yards with one touchdown and one interception) completed one big play for the Comets and the 175 fans in attendance.

Lemon-Rodriguez hit Mitchell for a 52-yard touchdown that cut into the Wolverine lead. After a blocked extra point, Sierra led 35-6 early in the third quarter.

On defense, the Comets totaled more sacks than Sierra. The team totaled five sacks for 20 yards compared to three for 17 for the Wolverines.

Most of Sierra’s 476 yards of total offense was generated through the air with only two of the scores coming on rushes. Still, the defensive line knows there is vast room for improvement.

“We need to do a better job getting into our gaps to create pathways for our linebackers, so they can make the plays that they need to make,” Comet defensive lineman Sio Anitoni said.

The Comets outscored Sierra 28-21 in the second half of the game by abandoning the pass, which netted three rushing touchdowns by three different backs.

After leading 35-0 at halftime, then scoring 21 points after the break, the Wolverines controlled the contest from beginning to end and eventually left with a big victory.