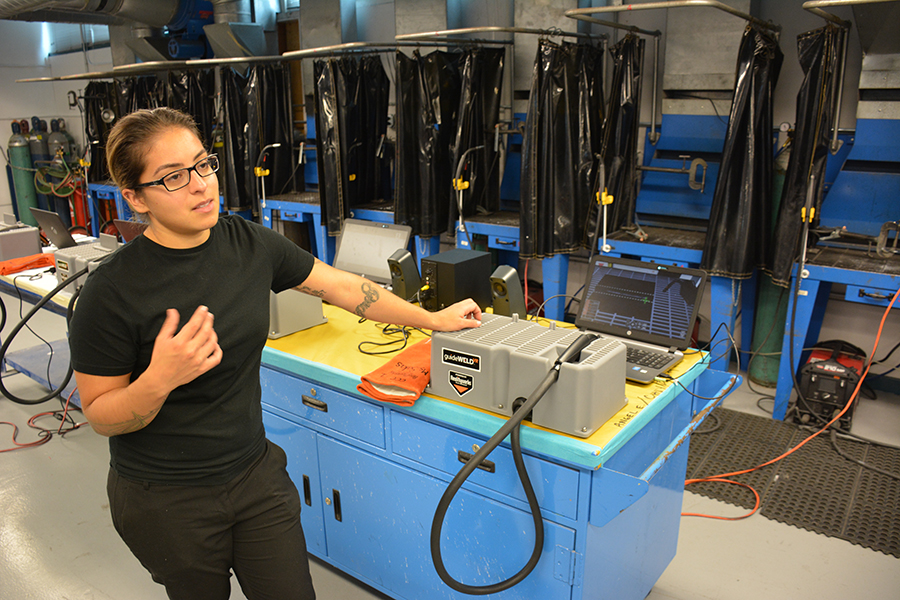 The equipment, aimed at beginners, will now be the first step in teaching students the arts of welding and painting.

The VR system, called GuideweldVR and made by the company Reality Works, is an exciting new step for education.

“It will be used in the AUSER-123/125 (auto collision repair) class and lab,” automotive professor Peter Lock said.

Later, the welding portion is expected to also be introduced in an automotive welding class, which is currently being proposed.

The first part of the VR welding system consists of a medium-sized grey box. With a simulated welding torch, students can train using a multitude of welding joints by simply changing out the included plastic joints.

The device then displays an interface to any screen or projector to allow instructors to easily teach.

This also has the added benefit of allowing other students to watch alongside the instructor.

The second part, which is a separate device, gives the user a much higher level of immersion with an included mask that houses a video screen.

With the more advanced system, students also have control over welding temperature and many other factors.

While the painting system is not being used yet due to technical issues, both of the welding systems are up and running.

The painting system consists of a VR headset and a simulated paint gun. In the virtual environment, students are presented with a metal plate, automotive instructor, Laura Salas explained.

Students may look around and use the paint gun to practice painting the metal plate.

The main reason to use systems like these is to help students gain muscle memory, which is an important part of both of these skills.

After gaining that experience, students may then move on to real painting and welding.

MIG (Metal Inert Gas) welding, the style of welding the students will be learning, as well as painting, requires lots materials.

As Salas explained, the combination of these two systems will allow students to learn the basics while also keeping the material costs down.

Salas believes that even if these systems don’t expose beginners to real welding, the money saved is far more helpful in advancing the automotive programs.

Both Salas and Lock agreed that having such a modern system to teach students is important for introducing a younger generation to these skilled jobs.

Automotive student, Alex Wu, said he is happy to see a system like this be implemented because it will give people who are not familiar with these skills a chance to make mistakes and learn.

The college was able to afford these VR  systems through two grants that were received two years in a row.

Both the Carl D. Perkins Grant and the California Apprenticeship Grant were obtained for the automotive department by the Dean of Economic and Workforce Development Kelly Schelin.

With the help of these grants, the automotive department was able to test the systems during the spring 2017 semester so that they worked as well as they could.

The public had a chance to experience the VR system at the El Sobrante Stroll on Sunday.

All those involved are excited to introduce the public to this new technology.

It is also hoped that having this new technology will inspire a new generation to join the workforce and learn these exciting trades.