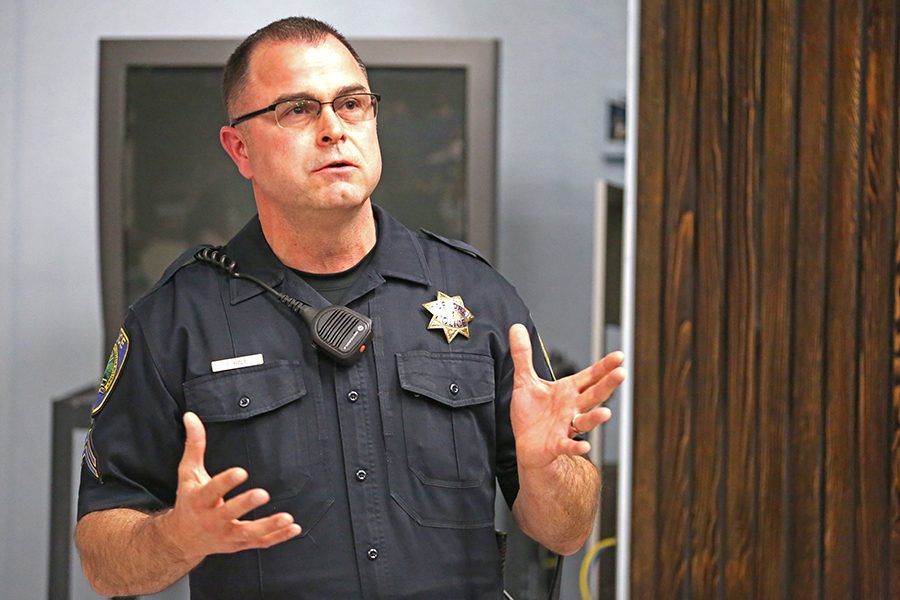 Lt. Tom Holt attended the "Coffee with a Cop" event held Sept. 20 in the Fireside Hall.

Local and district police officers helped break the ice with community members and dispel negative feelings toward those in uniform on Sept. 20 in Fireside Hall.

Coffee with a Cop is an event organized by the Associated Student Union in partnership with Police Services.

A selection of hot coffee and bagels were laid out to draw students and community members together with police officers.

A few fliers were also laid out on a table at the entrance. These included general safety tips, phone numbers to contact Police Services, and a short survey asking students how they feel about the available Police Services.

Police Services Lt. Tom Holt said the idea of the event is to create a friendly forum where people can talk face-to-face with police officers and allow them to ask any questions they may have. He said similar Coffee with a Cop style events have been happening all over the country with the same goal in mind.

Due to recent political division relating to police officers countrywide, Holt said it is important to build trust with the community.

If police officers are more approachable, students are more likely to feel comfortable contacting them with issues.

“(Police officers) are humans, not uniforms. It is a job, not who they are,” police aide Safi Ward-Davis said.

This event is not the first time the ASU has organized such an event.

About a year ago the ASU was tasked with finding a way to start a friendly interaction between students and Police Services, Ward-Davis said.

The ASU wanted to bring awareness about Police Services to campus and build community at the same time.

Ward-Davis explained that an event involving food was an easy choice because food brings people in and is a great conversation starter.

For younger students and community members, this outreach is important because it helps them learn that the police can be trusted, Ward-Davis said.

The ASU plans to have at least two more similar events this semester to further aid the conversation and help build community.