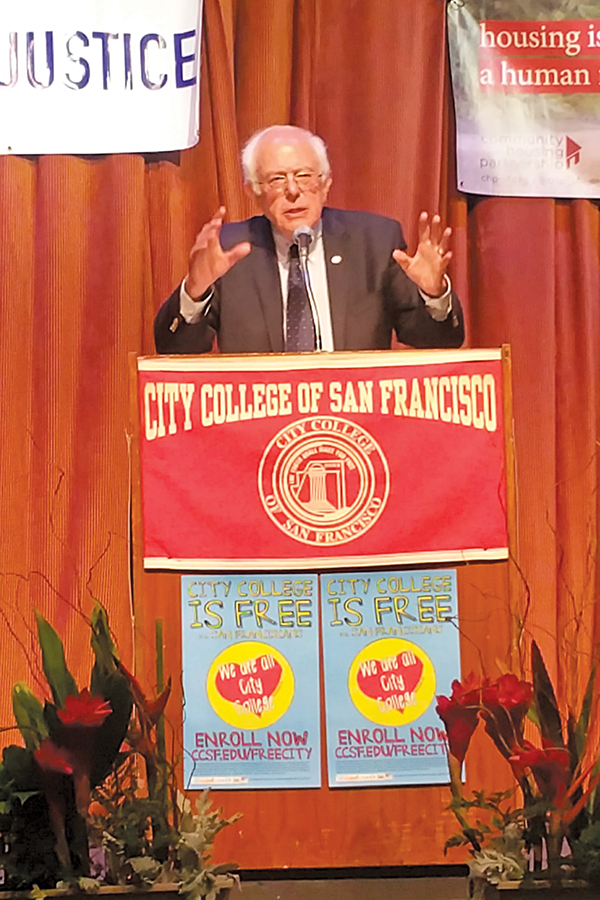 Senator Bernie Sanders speaks to a full crowd at the “Free City” celebration at City College of San Francisco on Friday.

SAN FRANCISCO — Senator Bernie Sanders (D-Vermont) spoke at City College of San Francisco in celebration of the college’s first semester being tuition free for San Francisco residents on Friday in the Diego Rivera Theater on the CCSF campus.

The “Free City” celebration featured the Vermont senator and several members of the community and the college who were key in the process of making CCSF tuition free.

In front of a capacity crowd, the speakers had a message of optimism for the future of the college

San Francisco Board of Supervisor for the 6th District, Jane Kim, authored Proposition W, the legislation that funded the $5.4 million program.

The proposition introduced a higher luxury property tax that would go to paying for units allowing San Francisco residents to attend CCSF on free tuition.

CCSF Dean of Counseling and Matriculation Lidia Jenkins said the increase in student enrollment has increased the workload of the counseling department, but there is a renewed energy on campus.

Sanders, a proponent of tuition free classes for city and state public colleges, said CCSF will become a model for other college districts to follow.

“You think that young people and working class people all over this country are not asking their local leaders, ‘How come in San Francisco they are making college tuition free? Why don’t you it in our community?’”

Kim said for counties to make colleges like Contra Costa College and Diablo Valley College tuition- free, a different approach may be needed.

“This measure may not raise as much money in other counties, so each jurisdiction would need to examine its own budget and potential revenue sources,” Kim said.

Jenkins said the most important factor in passing any measure to fund free tuition is getting voters on board because any tax increase will be a volatile issue for the community.

Jenkins also said for areas like the Contra Costa Community College District, all cities involved should be on board. “I don’t think it could work if one college in the district was tuition-free and the others were not.”

Kim said growing industries are requiring more advanced and technical skill sets and that community colleges are the safety net for workers in those fields.

Sanders didn’t just speak about tuition-free education but also at length about his opposition to the policies of “Trump and his friends.”

The senator also spoke about topics like his “Medicare for All” proposal which he spoke about earlier in the day at the California Nurses Association Convention in San Francisco.