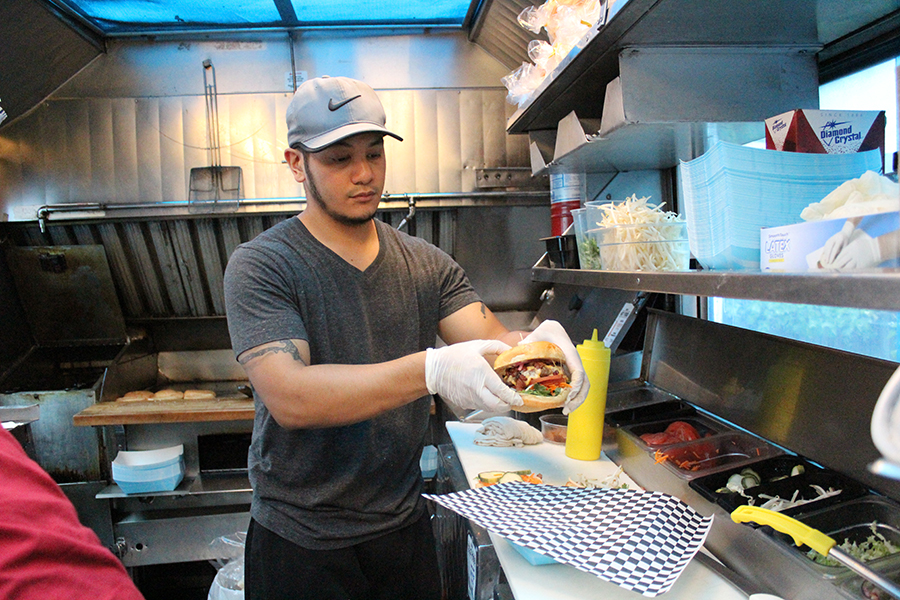 Chef Russell Lozano places a Curb Banh-mi burger on a serving tray in Curbside Kitchen while working an event at Four Fools Winery in Rodeo.

With a year and a half of running a food truck under their belts, brothers Russell and Raynard Lozano try to bring a community focused approach and family atmosphere to every curbside they serve.

Raynard Lozano said Curbside Kitchen is a way to express their family’s cultural cuisine in a readily appetizing way.

“Trying new cuisine can be intimidating. We hope our dishes can break down some barriers that prevent people from trying great food,” he said.

The brothers were born in San Pablo and grew up in West Contra Costa County.

“We take traditional Filipino flavors that our parents taught us and blend them with Southeast Asian and Mexican food influences from growing up in the Bay Area — and serve it up ‘American style’,” Lozano said.

After studying culinary arts at Contra Costa College, brother Russell Lozano spent eight years working in the restaurant industry. He said he wanted to start a food truck several years before establishing the business in November 2015.

“I didn’t like working for others and playing by their rules,” he said. “I wanted my creativity in the kitchen to thrive.”

Raynard, a graduate of UC Berkeley with a degree in urban development and city planning, said he wanted to open up a food truck too, even though he had limited culinary experience.

Russell said, “I said, ‘Why not make this a family business?’ I can’t run the business without his skills and for a food truck he can’t run one without the culinary side.”

The food truck operates in locations and at events around the Bay Area with roots in the Richmond and San Pablo area.

“I want Richmond to be a cool place to hang out. I want future generations to have cool things to do instead of going everywhere else but Richmond to hang out,” Russell said.

Raynard said as the business grows he wants to keep it in Richmond.

Russell said studying at CCC helped strengthen the fundamental cooking techniques that helps someone thrive in the culinary industry.

“Before going to CCC I never worked with professionals, just home cooking. The experience to work with pros was valuable.”

Curbside Kitchen is a small business with a few on-call employees for larger events. One employee is CCC culinary arts major Sergio Gutierrez.

”I want to open a food truck in the next few years. Working at Curbside and being able to talk to Russell is helping me learn what I need to do.”

Russell said culinary students don’t really start to grow until they venture out.

Working at Curbside Kitchen also helped him at CCC.

“Working at Curbside I learned how to make efficient use of my space no matter how small,” Gutierrez said .

Raynard said when starting the business, a focus on working with the community wasn’t necessarily the goal.

“The business trended locally because it’s where our interests and approach to running the business took us.”

He said working with the city of Richmond and surrounding areas was helped by the connections he made by working with nonprofit groups.

“Now we are getting to the point where cities will contact us first to work their events,” Raynard said.

Curbside Kitchen is working with Richmond Promise and East Brothers Beer Co. for “Cheers for the Promise” on Sept. 27.

All tips will go toward the Richmond Promise Scholarship Fund.

“They are the only food truck we’ve worked with since the beginning. They are a partner we can work together with to grow the community,” Phillips said.

Gutierrez said he didn’t realize how many hours it takes to run a food truck until he started to work at Curbside Kitchen.

During the busy summer months the two brothers can end up working 80-hour weeks.

“Working isn’t just time in the truck. It’s making contacts, permitting, searching for events and maintenance on the truck.”

Despite working long hours, Raynard Lozano said the time he puts in is gratifying.

“We get as much as we put into it. It’s easy to get carried away. We know if we put in as much effort as we can on the front end, in theory, it would reward us on the back end.”

“Richmond has embraced us. We’ve been getting good feedback from our partners and customers,” Russell Lozano said.