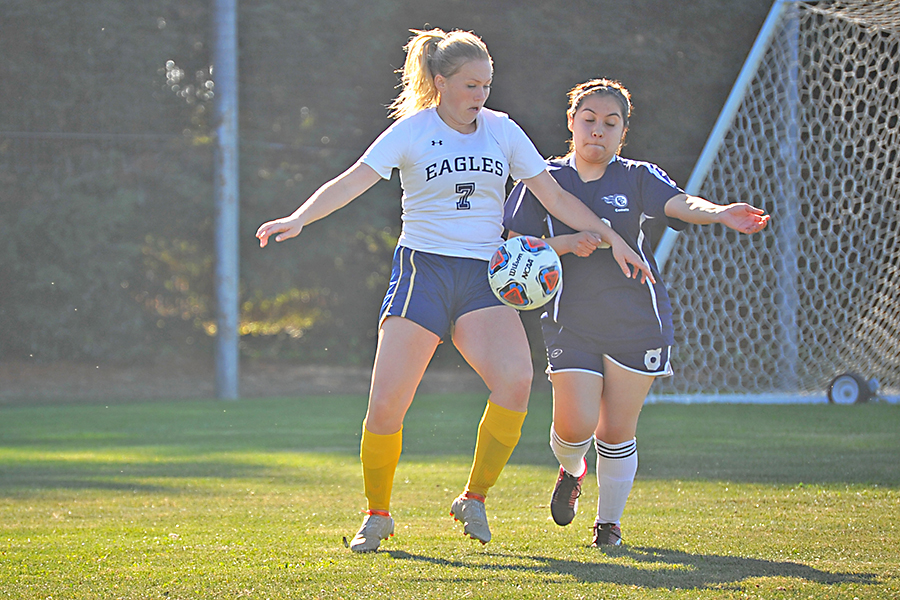 Mendocino College midfielder Emmylee Holt fights a Comet defender for possession of the ball in CCC’s season opener at the Soccer Field on Friday.

Within the first four minutes of the game a direct shot tested the waters for Comet goalie Yajaira Celso, as she saved the first of many Mendocino shots.

CCC forward Maxene Alvarado helped defend by kicking the ball into the air and away from the penalty arc, all while Mendocino held possession.

However, with 16 minutes remaining in the first half time, Mendocino midfielder Emmylee Holt struck the first goal by kicking the ball over goalie Celso.

The Comets were down 1-0 and with minimal reaction two minutes after the first goal, another fast and almost unforeseen counter attack by Mendocino’s striker Katalina Magdaleno increased the Eagle lead to 2-0.

Comet player Stephanie Alva said a lack of communication between the Comet players contributed to the success of the fast coming Mendocino attacks.

Magdaleno took a corner kick with six minutes remaining in the half but missed when goalie Celso trapped the direct shot, after kicking the ball out into the field. But with four minutes remaining of the first half, Hannah Norwood’s shot found its way into the net making it a 3-0 Mendocino lead.

“When you have a teammate dribbling the ball you need to follow her for the pass. Some of you are working for that pass and some are not,” he said.

He encouraged the team and told them not worry about the goals and advised the team not to dive for the ball but instead “stand tall.”

During the second half the Comets absorbed the Eagle pressure and started off with possession of the ball.

The Comets were seen battling to keep possession and gained enough energy to pressure Mendocino, breaking through the centerline to take the play into Mendocino’s side of the field.

Mary Helberg gained possession of the ball after Mendocino kicked the ball out of the endline.

The clock marked 28 minutes into the game and Helberg’s corner shot was found by Alvarado after a high ball in between the centerline and 18-yard box and scored a hopped pass giving the Comets their first goal of the season and making the score 3-1.

The Comets felt relieved with a well- played shot in net, but at nine minutes a brace from Holt with a low kick in through the bottom right side of the crossbar into the net made the score 4-1.

“The team is still young and the coach is encouraging. They all showed motivation,” spectator Rafa Torres, a CCC liberal arts major, said.

Helberg said, “In order to dominate we need to communicate. It only happens when you communicate well even if there is a variation of different skill levels.”

“It was a tough game. We need to connect more and that means communicate and have faith of each other and not be shy to talk and yell across the field to one another.”

The Comets will visit Yuba College in Marysville at 2 p.m. on Friday.