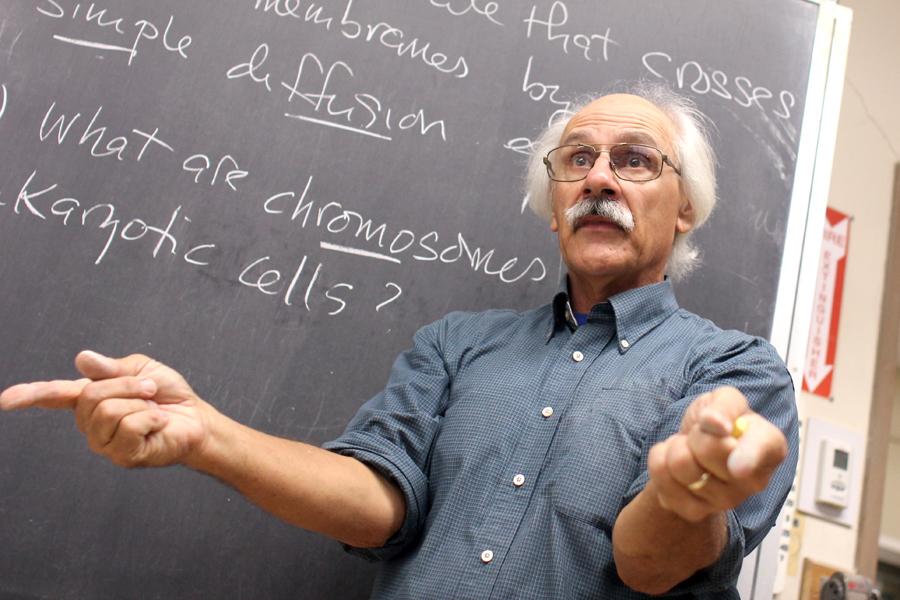 Chris Tarp, biological sciences chairperson and professor was given the Golden Apple award in August for his ability to engage students and promote their success in the classroom. This marks the second time Tarp has won the award in 22 years.

It is always a boon to students when a professor makes fundamentals tangible through lectures that are interesting and enjoyable.

In the case of biological sciences department chairperson and professor Chris Tarp, these qualities are what students recognized when they nominated him for the annual Golden Apple award.

The brainchild of the Alpha Gamma Sigma Honor Society, the Golden Apple award is presented each fall to a professor who students believe is both dedicated to and prolific in helping students achieve academic success.

Having been awarded the apple before in 1992, Dr. Tarp said he takes winning again 22 years later as a sign that his ability to engage is not waning.

“It’s good to know my skills are still decent,” he said, “in contrast to eroding with age.”

Despite Tarp’s modesty, his past and present students agree that he has the uncanny ability to make any biological topic intriguing and class sessions fun.

The only criticism anyone offered is that Tarp is a “tough grader.”

“Some say his class is tough, but classes at (four-year universities) are tough or even more difficult,” Osoria said. “Really, he is preparing (students) for what’s next.”

AGS President Brenda Vega said she has also heard of Tarp’s “reputation,” but added that students who attend class and labs and complete coursework on time should fare well in his biology classes.

Vega is currently taking BioSc 140 – Principles of Biology with Tarp.

She said the difficulty of his class is mitigated by the enjoyment students get from his teaching style and ability to make the material interesting.

“I like his class a lot. I haven’t taken biology since high school, so it’s a new class, new material and a lot of work, but (Tarp) has made it fun,” she said.

“He gets his lecture done and still has time to joke around and make people laugh,” Alvarez said. “The fact he’s having fun while doing it (teaching) makes it all the better.”

Alvarez believes Tarp truly deserves the Golden Apple, referencing his 8:10 a.m. BioSc 110 class in which Tarp manages to maintain interest and keep his class lively and participating, despite that most students in the class appear to have just woken up.

Tarp said, “I love teaching biology because I love biology. I suspect that if I knew any other subject as well as biology, I’d love teaching that, too.”

Tarp received his undergraduate degree from UC Santa Cruz and a Ph.D. in zoology from UC Berkeley. He began working at Contra Costa College as an adjunct professor in 1984 and became full-time in 1990.

He said he is driven by continual discovery and the eternal pursuit of education.

“He is a very passionate teacher,” Osoria said. “That passion spills over onto his students.”

Tarp said his passion for teaching is compounded by a desire to help students progress, to learn about people and cultures different from his own and the performance aspect of being in front of a class.

In his free time, Tarp partakes in many biology-related hobbies.

He also enjoys reading and completing do-it-yourself projects along the lines of car or home maintenance, he said.

Though it has not been advertised in the past, Vega said that the online election for the Golden Apple award is not exclusive to members of the AGS, but includes all students with a valid student ID number.

Students must include a short explanation for their choice when casting a ballot, she said.

Members of the AGS are discussing ways to advertise the election in the future, she said.